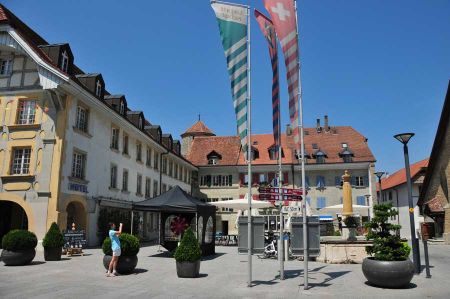 It is only a few kilometers from the campsite at Murtensee to the Swiss town of Avenches, which is done by bike within a few minutes.

Avenches has a well-preserved historic old town with a picturesque medieval cityscape, as we were able to experience during our subsequent tour. Lying on a hill that overlooks the Broye valley by about 40 m, you have in addition to the medieval buildings with sometimes almost Mediterranean flair  with a wonderful view of the surrounding landscape and the Murtensee from many locations.

The Old Town with its almost rectangular floor plan has an extension of just 300 × 200 m and is clearly reminiscent of the layout of Roman settlements, no wonder actually, because Avenches / Aventicum once was the capital of the Roman province of Helvetia. The old main road from Payerne to Murten today forms the central longitudinal axis. To the south and north of it, there is a side street, which are interconnected by three cross streets. From the former city fortifications still existing are the Tour de Benneville in the south and the Tour de Vully in the northeast; both date from the 13th century. The city wall was demolished in the 19th century as in many places. Also built in the 11th century tower on the edge of the amphitheater there is huge tower which probably belonged to the ring wall, too. It houses the Musée Romain with a rich collection of archaeological finds from the Roman city of Aventicum since 1838. 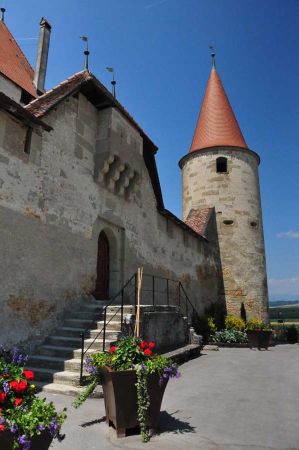 The Reformed Church of Sainte-Marie-Madeleine was built at the end of the 11th century in the center of the old town and replaced the former Merovingian churches outside the city walls, which gradually fell into decay and was completely demolished in the 17th century. It was rebuilt during the Gothic style epoch from 1709 to 1711. From the original building, just the Romanesque round apsis is preserved.

In the northeast corner of the old town stands the castle. It was built in the 13th century as a castle and initially was the seat of the Kastlans, since the bailiff appointed by Bern in 1536. This was from 1565 to 1568 make a fundamental transformation to today's Renaissance Castle. It has a rich interior design and today houses the city library. The three-storey Hôtel de Ville, built in 1753, which freely is translatable with Town Hall, sculpted pediment and arcades, the Hôtel de la Couronne and the Tour de Montauban, a polygonal staircase tower from a 15th-century manor house, are also worth a visit , The Grand-Rue is lined with numerous stately late Gothic citizen and patrician houses from the 16th to the 18th century. 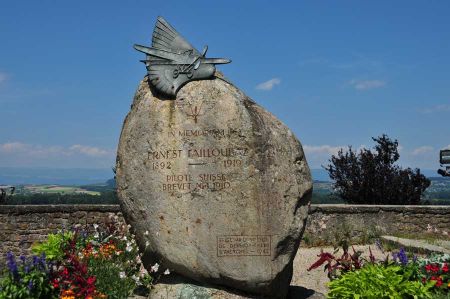 On May 10, 1910 Failloubaz was first to fly with a machine of Swiss design, which had been designed by René Grandjean. Due to his youthful age, Failloubazle was called the "gamin volant" (the flying child) and Grandjean himself attempted a flight on May 15. However, on 28 September 1910 Failloubaz undertook a flight from Avenches to Payerne With this 6-minute flight, Failloubaz managed the first inland flight from city to city on 2 October, followed by a flight day at the newly founded aerodrome in Avenches and a meeting on 8-10 October in Bern, where Failloubaz received first Swiss pilot license.

In September 1911, the Swiss army conducted the first reconnaissance flights. On the fifth mission, Failloubaz and observer Gustave Lecoultre had to make an emergency landing on the rented Dufaux plane. The attempt to show the benefits of aerial reconnaissance had failed for the time being. For health reasons, Failloubaz was not recruited and deployed as a military pilot during the First World War.

A monument of the Swiss aviation pioneer stands in the center of Avenches.