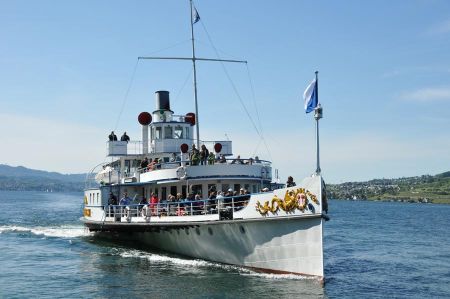 Further preparations as part of our project A Cultural Journey along Roman Roads will take us from Antalya to Zurich and thus to our friends Beat and Sebnem in Wädenswil.

Early in the morning we reached Zurich after a trouble-free flight with a magnificent view of the still snow-covered Alps and Lake Constance. The Swiss train took of from Zurich Airport then went on to Wädenswil, always along Lake Zurich. It should follow another highlight after the arrival, because we decided to take a walk along Lake Zurich due to the beautiful sunshine.

Again and again we were fascinated by the wonderful panoramic view over Lake Zurich to the snow-capped peaks of the Alps, which border the lake like the frame of the picture. Despite temperatures that were not really like winter yet, there was already a lot of activity on and around Lake Zurich. Sailboats that took advantage of the relatively mild wind for a first exit, pedestrians and cyclists along the shore and the pleasure boat on the lake. In addition, a colorful variety of waterfowl, hoping for a few lumps of old bread from the side of the walkers. As very clever and motivating we found the attached signs on the various types of waterfowl occurring on the lake, which promptly led to looking, because after all, one wanted to know what kind just swallowed the brought bread. 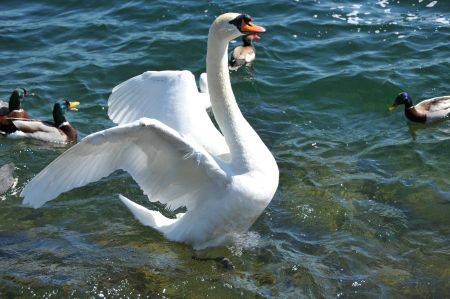 Already during our last visit we had got to know the advantages of the real sophisticated public transport of Zurich as a network system. This way buses, trains and trams can be combined as desired. We now learned from our friends that the ferry service on Lake Zurich is also integrated into the network. Solving a 24 hour ticket thus allows the use of all 4 means of transport within a district, so that one can complete a combined city and lake tour with one ticket booked.

We had arrived at one of the jetties, where a group of passengers had already arrived, waiting for the arrival of the ferry. So we joined for some photos too, as we noticed that our approaching ship is one of the two paddle steamers, which still exists on Lake Zurich. This is how the first encounter took place with the old paddle steamer "Stadt Rapperswil" belonging to the Zürichsee-Schifffahrtsgesellschaft, which operates from April to November, from investor to investor, being used for the public transport network. 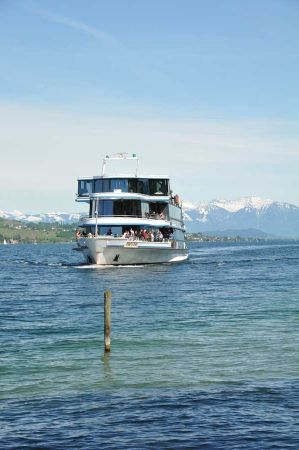 It is a fascinating sight when the steamer approaches the jetty at high speed, the captain gives his orders on the bridge, then the mighty paddlewheels momentarily stop and immediately re-rotate in the opposite direction. The landing maneuver was very professional due to clever use of the powerful blades of the ship. The shape of the bow and the ride gives an idea of ​​the age of the steamship "Stadt Rapperswil", more than 100 years old technology that still inspires.

In response to our questions we learn that the "Stadt Rapperswil" was built in 1913/14 by the company Escher, Wyss & Cie in Zurich. Already on May 29, 1914, the launch was completed and at Pentecost, the steamship was put into operation. Due to the outbreak of the First World War, ship operation had to be stopped almost entirely a few months later, since there was hardly enough fuel due to the decline in coal imports. Here even the Swiss Federal Council had become active, which ordered the attitude of all steam-driven ships. After the war, ship traffic was resumed quickly.

During the Second World War, the paddle steamer "Stadt Rapperswil" was confiscated by the military, causing passenger traffic to come to a complete standstill. During these years, the boiler of the "Stadt Rapperswil" was continuously heated to maintain a permanent operational readiness. In 1951, the old wood firings of the boiler system were replaced by heavy oil furnaces. In the following years, new ships were added to the fleet on Lake Zurich and the use of paddle steamer was mostly limited to Sundays. 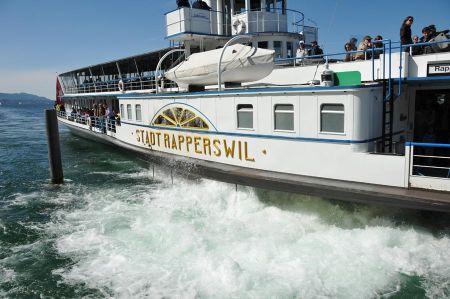 When in the autumn of 1969 planning ideas of the Lake Zurich Navigation Company forced the public to stop operating the paddle steamer, a protest movement formed to preserve the ships as a technical cultural asset. After long discussions, which were also understandable due to the high operating and maintenance costs, they ended on the following receipt of the ships in the result after all. The actions of the association "Pro Raddampfer" at the Federal Office of Transport, the operator ZSG and the public had ensured that the following statutes was introduced:

Through further public activities, which also led to appeals for donations, in the years 1977 and 1983 the board of directors of the ZVG was convinced that the paddle steamer of Lake Zurich can be maintained in the long term. Proudly then in 1985, a big party on "150 years steamboat on Lake Zurich" be looked back. Meanwhile, further technical improvements of the two steamships "Stadt Zurich" and "Stadt Rapperswil" have been implemented, so that one looks into the future with hope. It would also be a pity if it came to an end with the technology of paddle steam boats.