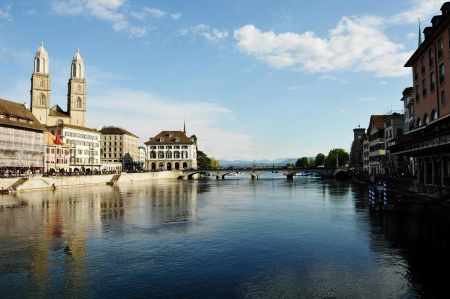 The following two days we wanted to spend sightseeing in downtown Zurich and in this regard had searched for accommodation in the city center of Zurich in the relevant hotel booking machines.

Accommodations are relatively expensive, as in many European cities, Zurich including too. With luck, we found a saving offer of a hotel on the square Bellevue, almost directly on the Limmat, the river passing Zurich, which is fed from the lake and then flows into the Rhine river. This really favorable starting position enabled us for a first small reconnaissance tour along the riverbank, which we then expanded in the next two days on the side streets.

From the hotel we first walked to the already well-known bridge "Quaibrücke", which connects the Bellevue square with the Bürkliplatz and which forms the crossing of the Limmat also the main feeder of the tourist steamer on the lake of Zurich. Accordingly, large groups of visitors from many countries are to be found at the quay facilities, which want to use one of the many program tours on the lake. Offered are from Single meeting tours, music and gourmet tours to pure ferry operation so almost all imaginable categories of steamer tours. Even the boat types are selectable, so there are two paddle steamer boats, a variety of excursion steamers of different sizes but also small rowing boats, which are available for a tour on Lake Zurich. 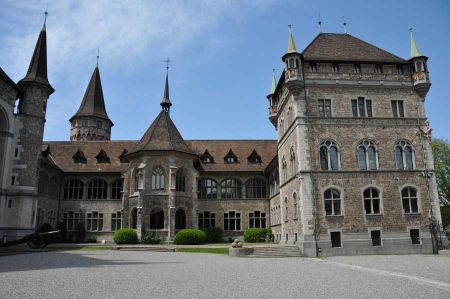 After some first photos, we crossed the bridge and then turned right, always following the riverbank. In this way we got from one bridge to the next, partly on wide promenades, partly through narrow streets that are built between small tiny houses. After the wide Rathausbrücke, the narrow mill bridge follows, which we used to get back to the opposite bank of the river. We just notice the buildings of the historic rowing club on the way because some of the historic rowing boats are moored in front of the building. In general, there are a variety of photo opportunities that are not limited to the ecclesiastical historical buildings. So, without registering ourselves correctly, we arrived at the main train station next to the castle-like building built around 1900, which today houses the Swiss National Museum. We decided to add a visit to the museum for the next morning, as we are initially interested in the museum itself and in the special exhibition of contemporary photography offered those days. After some shopping, we decided to return to the hotel on the opposite bank of the river. 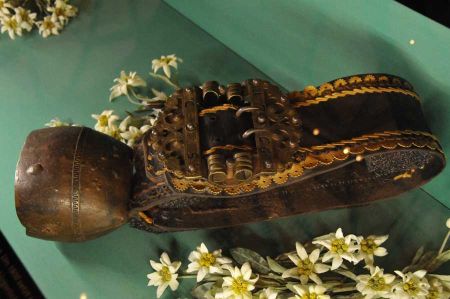 Early in the morning, after breakfast in the hotel, we again walked towards the Swiss National Museum. Immediately at the reception of the museum we ask for a permission to photograph, which we receive after presentation of our press ID without any problems. Very appealing the tour begins with an overview of the individual epochs of cultural history of Switzerland, which in addition to the settlement by Celts, Romans and Alemanni allows a long review until the ice ages. We especially liked the video change in the course of history, which also has to answer for the emergence of the linguistic zones in modern Switzerland. Here are the reasons for the three main languages in today's Switzerland: in addition to German and French, a lot of Italian is spoken in some regions.

Celts and Romans and their transport routes 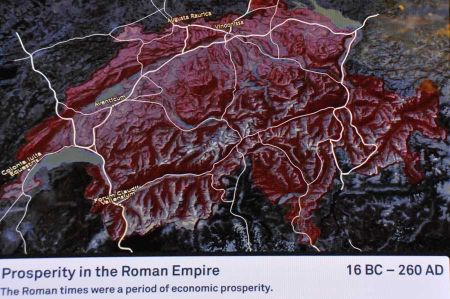 The documentation on the traffic routes, which required special activities by the new settlers due to the high mountains, left profound impressions. The Romans, in particular, understood a lot about road construction, and it was precisely in the Alps that this knowledge was necessary. We will deal with this topic further in the future as part of our project. The visit to the Swiss National Museum has always proved to be extremely interesting. We are amazed at how much time we spent looking at the exhibits in the museum when, a little while later, we were sitting in the park next to the museum on the banks of the River Limmat.

We make our way back to the hotel, because we also want to stroll through the side streets and do a little "shopping". At the station bridge we turn off the bank of the Limmat and continued on the Niederdorfstraße. A variety of restaurants of different countries, small bars and cafes can be found here for the small purse. In addition, a variety of shops, ranging from the small Hoftischlerei to the comic bookshop. Of course, the Swiss watch offers should not be left unmentioned. Right now our purse does not allow a Rolex investment. Anyway, everywhere you can see that Zurich is definitely a city for the better situated people. But the multitude of noble cars in the streets allows for this inference.

Roman bath at the wayside through Zurich 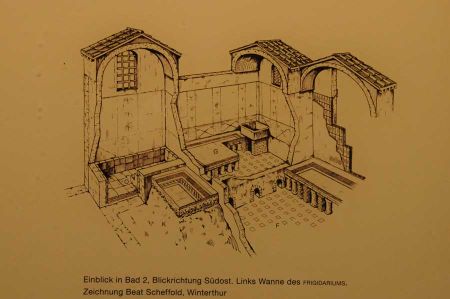 The following morning we decided to take a stroll through the main shopping street "Bahnhofstrasse" and the "Rennweg" with its many side streets. So we found, more accidentally, the ruins of a Roman bath, which were discovered when creating a sewer below the existing buildings and were at least uncovered in the passage area. Today, covered with a grate in grid structure, you can at least get a rough impression of a Roman bath. Some graphic representations help the newcomer in the unfolding of his imagination.

A little further we meet a shop, better a boutique for dark chocolate lovers, which attracts our special attention. In a hurry, we got in and we learned a lot of details about how to make and trade dark chocolate from the present owner. Mostly produced in small companies in Switzerland and with the cocoa beans from the countries of origin of the cocoa, also the packaging can be described as extraordinary. Over time, a few small businesses, mostly made up of enthusiastic individuals, have taken advantage of the still-to-be-labeled dark chocolate to make a living with increasing success. Special recipes that change over time or the special form of presentation as a long praline or block break contribute to the success. Today, lovers of dark chocolate from many countries of the world come to Zurich to stock up on these delicacies. A little later we can convince ourselves of the quality of the dark chocolate, which is based on our cocoa beans from Venezuela. Simply delicious.

The next morning shortly before our departure, we meet in a small sidewalk café of a German dentist who practiced for about five years in Zurich as a pediatric dentist and gives us an insight into her wealth of experience as a foreigner in Neu Zurich. An interesting city that we will certainly visit more often.