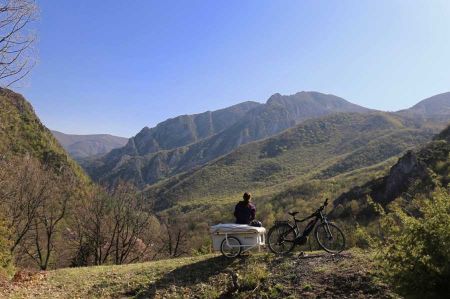 It has only been a year since we had reported about the mini-caravan or B-Turtle of the company GentleTent from Vienna as part of our trade fair tours during the Caravan Salon Düsseldorf, which at the time was very well presented in the media on a large scale, which had led to huge interest by the visitors.

One more reason to inquire about how the further development went on. So we arranged an appointment with Gernot Rammer, the developer of the innovative tent constructions at his booth. Of course, there would certainly be some new innovations, so we were looking forward to the meeting. 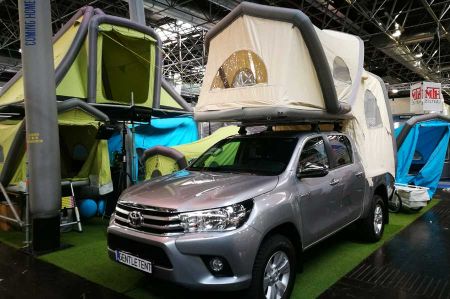 And we should not be disappointed! From afar, the pickup was seen with the sand-colored tent structure, so large the tent structure on the top. The basic concept of the B-Turtle's and the Roof were to be found again here too, a 2.20 by 1.40 meter drop-stitch mat as a base, attached to the constructive air hose for the sleeping tent based on an aluminum profile, which is used for attachment to the roof rack system. So far so good and well known. New and really successful is the approach and transition to the loading area of the pick-up, resulting in a large awning, which is suitable for receiving a compact kitchen or seating furniture. Accordingly, the interest of trade fair visitors was correspondingly high. We will report separately about it. 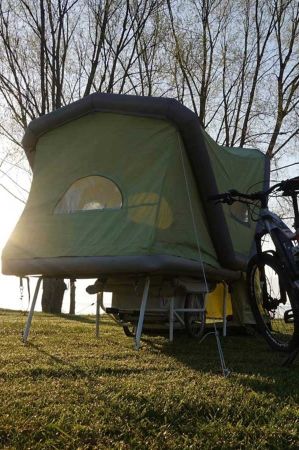 Overall, according to Gernot Rammer, the development of the B-Turtle as well as the other tents is very satisfactory, sometimes almost too fast, since it is often difficult to produce even lower production figures due to the many production sites in Europe that migrated to China , because of course the inflatable tents as well as the bike trailer are still a bit unusual niche products. But the production of the bicycle trailer made of welded, bent aluminum tube parts is not without difficulties, so there are only a few production companies in Europe who are willing to manufacture and have both the know-how and free capacity for quantities under container quantity (from China).

So we were quickly back to the B-Turtle and thus also in a further stage of development, which has now firmly established due to the many demands: rental stations for the B-Turtle at relevant sites, in addition to the necessary infrastructure (bike paths and bike rentals) have interesting meeting points. Again and again, the questions of the visitors after this loan or test tour had occurred, so that in Vienna already tours were put together, which can then be traveled with the rental mini-caravan, always together with your own sleeping space.

Throughout the year, as well as by the presentations of the B-Turtle during the various fairs, the idea has grown to develop a network of rental stations that made well-known on the Internet, a new, previously unknown travel concept by bicycle and tent trailer, whether along well-known cycle routes such as the Danube Cycle Route, the Moselle Cycle Route, along the Rhine, the Weser or the Elbe, circumnavigation of Lake Constance, to name only the first known cycling routes. Just recently, according to Gernot Rammer, a customer of the B-Turtle had been traveling 3,400 kilometers to southern France as part of his holiday with the bike trailer. 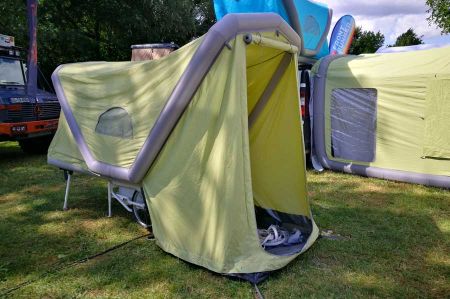 Meanwhile there are first such lending stations in Austria, Switzerland and also in Germany, so that one engages itself on the part of the company B-Turtle strongly with the structure of the lending network, which naturally for the lending stations (if possible in the bicycle lending active companies) a business extension and means additional activities that need support centrally as a network, also to promote mutual exchange. In Vienna, for example, the focus is on concepts that will help operators to establish this new travel profile.

If there are people or bike rental stations among the readers of alaturka.info who are interested in setting up such a lending network, please let us know: info (ed) alaturka.info (We will forward the requests accordingly). An important prerequisite for this is the cooperation in the creation of route concepts with interesting destination points, which should also include the inclusion of overnight accommodation (not just camping sites), for example Eko farms or other places of interest along the routes. Also concepts and ideas for partially guided routes over several days are quite desirable. Here are many possibilities.

If you are interested, get in touch with a short presentation of your ideas!