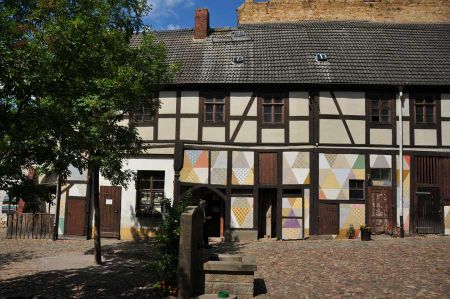 Lucas Cranach the Elder was one of the most important German painters, graphic artists and book printers of the Renaissance. Cranach, born in Franconia, had lived in Vienna for some time when the Wittenberg Elector Frederick the Wise brought the artist to the provincial town of Wittenberg.

Elector Friedrich, one of the most important patrons of his time, supports his court painter with numerous benefits:

He paid him an annual salary of 100 guilders, which was 10 times the income of a student. He was taken care of by the castle kitchen and received courtly clothing. The support of the elector made Cranach so much wealthy that in 1512 he was able to acquire a house in Wittenberg at Markt 3 and 4, the nucleus of the later Cranach farms in which his work and activities were located. For the growing family and the workshop, however, the property became too small quickly, so Cranach moved to Schlossstrasse 1. In 1522, however, the artist bought his property at Markt 4 back  to use it for print production. Cranach lived in Wittenberg for 40 years, where he left a lasting mark as one of the most versatile personalities of the Reformation. 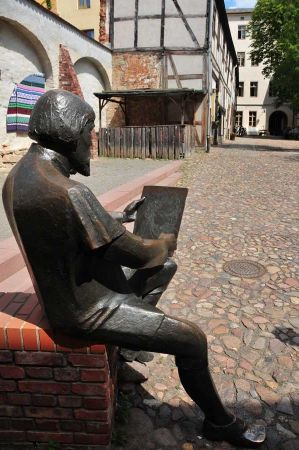 Cranach was court painter at the Electoral Saxon court under Frederick the Wise from 1505, later under the rule of John the Constant and John Frederick the Magnanimous. He took over the painting workshop previously run by Jacopo de 'Barbari in the Wittenberg Castle, whose tasks included not just decorating churches and palaces with paintings, but also the making of book decorations and trivial painting, gilding and designs of festive decorations and ornamentation. Impressive testimonies of the birth of medal art in Germany are, for example, the so-called Locumtenenstaler with the likeness of Frederick the Wise, for which he supplied the draft. About type and extent of the activities numerous received statements are given.
In addition to numerous altarpieces and allegorical paintings, he and his workshop also produced a large number of portraits of his masters and the reformers Martin Luther and Philipp Melanchthon. The Cranach workshop, which has allegedly left about 5,000 paintings, was continued by his son Lucas Cranach the Younger. 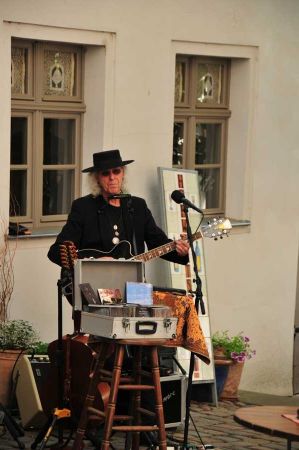 Today, the museum is a meeting place of the Wittenberger inhabitants and their guests, we were lucky enough to be able to attend a musical event - music that did not fit the Renaissance and yet or just because of that found its audience. We stayed longer than originally thought.

As a court painter Cranach made numerous portraits of his employer, first in 1507 for the Nuremberg Dominican Church. January 6, 1508 Cranach was awarded an emblem as a family crest by his employer. In the same year he was sent on diplomatic mission to the Netherlands (next to Mechelen) by the Elector, where he made paintings and portraits of Emperor Maximilian I and the later Emperor Charles V - among other members of the family.

In 1510, documents by the city of Wittenberg mention special payments from Lucas Moler for the first time. In addition, he acquired various construction materials in that year. It is concluded that, together with the workshop, he moved from the castle to the city that year.
In 1520 he was able to buy a pharmacy in Wittenberg, a few years later he is also proven as a bookseller, paper dealer and publisher. Together with his business partner, the goldsmith Christian Döring, he was, inter alia, working as publisher and edited the publication of Martin Luther's September testament. He also became a respected and influential personality in his new home, as landlord and publisher. In 1524 he met Albrecht Dürer in Nuremberg; on this occasion Dürer made a portrait of Cranach with a silver pen. For the first time, in the term 1519/1520, Cranach got the council chair of Wittenberg as a chamberlain and exercised this office in the period following until 1535 repeatedly. He also served in the Council as a member of the 1528/1529 term. 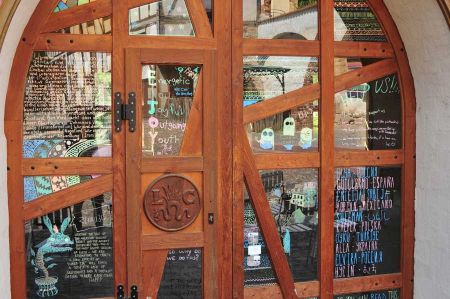 In Wittenberg he made friends with Philipp Melanchthon and Martin Luther. Together with his wife he was a witness in 1525 when Luther married Katharina von Bora and was the godfather of Luther's eldest son Johannes. Cranach not only developed into the characteristic painter of the German Reformation, he, by the help of his graphics, worked in Reformation writings nationwide in the intellectual dispute of this time. However, he was not only active for Reformation-minded clients, but also for Old Believers. For example, he created the extensive altar cycle for Cardinal Albrecht's new collegiate church in Halle.