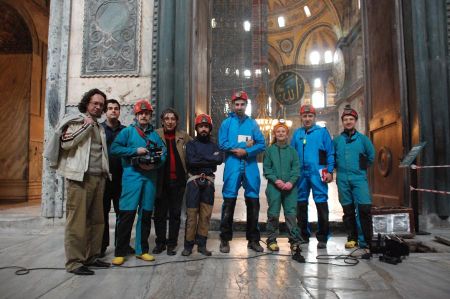 With his team which is composed of divers and speleologists; director Göksel Gülensoy, who is passionate about Hagia Sofia that impresses people with its dimensions and architecture, brought the secrets which are hidden in the depths of Hagia Sofia to light.

1.    How did you fall in love with Hagia Sofia and how this love became a passion?

2.    Could you tell us about the processes of your “In-Depth of Hagia Sophia” project?

My interest to depths began after my documentary formed on the legends of Hagia Sophia in year 1994 and I started to conduct my researches on the legends. I continued on with my researches after adding my friend Kutsi Akıllı, who is my scriptwriter and research writer, into them.  After scanning thousands of book pages we needed to receive their permissions in order for the implementation of the script written.   This was a very special permit because many films have been made in connection to Hagia Sophia until today however underneath it was going to be filmed for the first time. Whether they were reservoirs or tunnels…

After a long process we received the approval of Ministry of Culture.  I began preparations to organize our team and I had to work with the best of Turkey; because the permission issued to me was issued for 1 time only and this took the luxury of making a mistake from my hands.  I needed to perform a perfect job.

Levent KARATAS (CMAS) undertook the responsibility of coordinating the operations of underwater and caves.  Ercüment ATAK, who resides in Greece, became my film director.  We dived into the water reservoirs at the first phase of project in year 1998.    Shooting were a success.  Although Hagia Sophia did not require it, everyone who dived and didn’t dive, including me, x-rated our bodies from our necks down to our abdomen region by bringing a mobile x-ray machine for not leaving any doubts in the minds of anyone.    The reason behind this was not to allow any rumours to occur in future.

Later we dived into the tunnels, which were the second phase of the project.   We once again experienced some difficulties in those shootings. Dangers such as gas leaks, collapses and landslides were awaiting me and my team.    Ambulance and team of paramedics were also standing by again any possible problem.  Thank God we didn’t have the need but we had to take precautions.

3  Do you reap the fruits of your struggles to reveal the mystery of Hagia Sofia?

In Turkey, people do not pay attention to us, the documentary film-makers. We ask for support, but unfortunately we can’t find. Nobody has provided financial support for my documentaries till now. This is so miserable… As a result of our devoted works, we conclude everything and display it; and people praise us to the skies. I wish I could sustain my life by making documentary films.  For this reason, we can’t reap the fruits of our struggles in this world; but maybe we can reap the fruits of our struggles in the other world.

4  Which unknown side of Hagia Sophia is explored in this documentary film of you?

Let me tell you this. I changed the history books with this study of mine. The legend that the wells, which are written and frequently mentioned in legend books, are leading to the Basilica Cistern and Islands (Adalar) is now a waste legend. There is no path like this. I’ve revealed that this is not true.
We reached to King graves (papaz mezarları) which is also frequently mentioned in new books. We found bones which resemble child bones in these graves which are composed of two big rooms. And we displayed them. A Russian explorer had visited Istanbul and wrote in his writing that there is a child cemetery in the garden of Hagia Sofia. Considering this writing, we think that this child cemetery belongs to St. Antihenos. That’s why our study is important.

5  Was there anything in the depths of Hagia Sophia that disappointed you?

I wasn’t disappointed certainly. On the contrary, Hagia Sophia surprised me. It even bestowed its favour upon me and showed me the mysteries it held. I believe it has a lot more to show… Love is such a thing. It requires patience and faith. I have shown patience and have the fruits of my labour.

6  Mr. Gestenecker from Darmstadt Technical University wrote that one of the northern west columns in Hagia Sophia is constantly wet (sweating column) in one of his publications. Do you have anything to say about this?

Let me clarify this. Yes, it is correct; the column is constantly wet. Because there is a cistern below that marble column. Due to cistern, marble column absorbs the water as you know and it causes the column to look wet or damp all the time. So, there is nothing miraculous about it. It is the way of the nature…

6.    It looks like your love for Hagia Sophia will never end; your next project must have shaped in your mind, can you tell us about it?

My love will never end, because Hagia Sophia gives back. My adventure in its depths will continue and I will make a trilogy.
We planned Hagia Sophia as documentary but we are also working hard for a motion picture, I hope everybody watches it.  This magnificent structure, which is counted among the 8 wonders of the world, should get what it deserves.
Also, my work about Sultanahmet Square and Topkapı Palace continues. Soon, I will shoot a documentary about these structures as well.

We newly started our way… You, with your all glory, stand there…  You exist and you’re the light of my way… I” ll be with you, I will try to get you better and listen you… I wont give up working for you…  Keeping my first excitement, I will reach the pleasure of  understanding and exploring you… I thank you… - Director Göksel Gülensoy