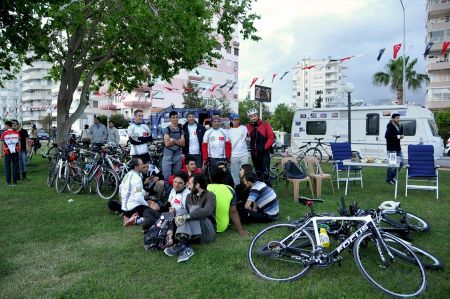 One time again, we met a colorful and vivacious musician due to the internet. Published on the internet, The Friendship Concert news crossed our path with pianist and composer Murat Ömür Tuncer from Antalya.

Murat, who stays in touch with different musicians of different genres, wanted to create an awareness on certain issues while having fun at a festival with the musicians that incredibly enjoy music and capable of delivering this to the audiences. The first event was organized in 2012 and for the purpose of addressing to a great number of audiences with a low-budget, the second of the event had to be organized.

Within the context of our culture and intimacy journey along the Roman road project, we were precisely in the way of Murat. Consequently, we contacted through the internet and after an exchange of ideas, we decided how to integrate our caravan into the concept of the program, which is based on performing various music genres from different countries. We took part in the Friendship Concert that was planned to be organized in the Antalya Phaselis Antique City, but then the location was changed to Antalya Falez 2 Park.

We came to the concert area with our caravan and supported the Friendship Concert for two days by presenting our small mobile exhibition, which is based on the theme of “Antique City Details” and consists of the photographs we took during the journey. Since we did not want to sacrifice the Phaselis Antique City to the destruction of nature, history and culture, we wanted to create awareness about this first-degree archaeological site.

For this two-day long event, Antalya Provincial Directorate of Culture and Tourism gave necessary permissions for using the Phaselis Antique City as the activity area. When there were twenty days until the event, the same directorate charged a fee from both the visitors and the art director of the organisation. With the solid understanding of Muratpaşa Municipality officers, the concert area was specified again as Antalya Falez 2 Park and the place was making a strong impression on us with its romantic air and location.

Phaselis, city of the ancient Lycia, is a part of world heritage and is under the responsibility of all humanity. It is the legacy of not only the inhabitants of Antalya, but also all humanity. The musicians from different countries, who met at the Friendship Concert, were going to perform to mention the importance of Phaselis and carry this responsibility to the societies. During the festival right here, not only friendship and art, but also the connective power of cultural heritage were connecting us in this Mediterranean cliff with outstanding beauty, so that Phaselis was not incomplete at the festival. Instead of the magnificent antique city remains in the background, there was captivating silhouette of Taurus Mountains.

Now, it is Festival Time

On Saturday afternoon, it was time to setting out. When we arrived in Antalya Falez 2 Park from the Manavgat parking lot, we noticed that all parking spaces were occupied because of the Kite Festival. Until the festival was over, we observed the kids who were trying to control the kites against the strong wind and how they were cheerful and vivacious when they were spending time with their families. After a while, there were available parking spaces at the festival area of the Friendship Concert and we managed to park our caravan in the area that was reserved by Murat. Even though things are usually left to the last minute in Turkey, there was no need to rush and everything was ready on time. Today, we added a new one to these examples.

Before the opening of the concert, we prepared our booth, mini photography exhibition, free books and brochures and set table and chairs already. Now, entertainment could begin!

I have almost forgotten. In the afternoon, we had a meeting about our journey concept with Europe cameraman Sinan Akiner and his crew. They decided to come with us when they were informed about the festival. An interview with the artists and shooting during the festival, which was going to witness interesting performances with brilliant musicians, was an attractive idea.

By the way, most of the crowd was teenagers and they gathered on the grass in the concert area in Antalya Falez 2 Park. Audience of higher age group brought portable camping chairs and picnic stuff. There was a comfortable and relaxing atmosphere like the beginning of the Hippie culture at the end of the 1960s. Antalya bicycle lovers group and bicycle fans cycled starting from the Atatürk Park until the concert area. They were cycling for freedom and when they arrived in the area, the comfort in the environment left its place for entertainment and joy. Time of the concert has come!

After a short opening speech, Murat Ömür Tuncer presented Merve Akyıldız & Band and the musical part of the festival started.

Merve Akyıldız, who was born in the winter of 1994, February, is one of the young artists that grown up in the Bornova district of İzmir. Due to her immigrant grandmother and grandfather, the immigration feeling that never has been lost, must have risen her passion to Balkan music.

Besides her wonderful voice,  maybe her background is what shapes her songs and makes them visible by going deep inside. She covered the song “Ederlezi” by Gren Bregovic that we like to hear from him. The climax of her performance was a Macedonian folk song, which is called “Jarnana Jarnane”.

It was unquestionably a successful opening, who expects that much?

The successful pianists of Piano Four-Hands concert, Selin Şekeranber and Yudum Çetiner are from Stuttgart and they enlivened the festival. Under the name of Duo Blancé & Noiré, the duo continues to create music by working up into since 2008 and they are glad for making music together. The duo had great success by participating in the International Lausenne Music Festival in Switzerland , 2010 and they were invited again to the same festival for the next years. This was followed by the invitations from various international music festivals in Europe, the success and the grades they placed in the music competitions. They entered into the Duo Piano department of the Stuttgart State Conservatory with the highest success grade and their education continues with Prof. Hans Peter Stenzel. They still continue to give national and international concerts.

Antalya Falez 2 Park witnessed a splendid concert and the applause of the crowd was like a reflection of their appreciation.

Another interesting concert of the festival belonged to the band “Acaipademler”, which was formed by actor and musician Teoman Kumbaracıbaşı in 2003 and he is the vocalist of the band. He was born in the capital city of Argentina, Buenos Aires, completed his high school education at the Austria High school and graduated from the Faculty of Naval Architecture Engineering, Istanbul Technical University. He had never practiced his profession, because his passion was art. When he was in high school, he was acquainted with theater and started to work both on stage and back of the stage in several theaters.

When he was seven years old, his acquaintance with music started by playing mandolin. At the age of twelve he was capable of playing violin and at the age of thirty-eight, he started to play guitar.

His theater and acting career still continues and as a founder member of Acaipademler, he plays guitar and creates music fondly in this progressive rock band. Except his native language Spanish, he is also fluent speaker of German and the songs he sings in both languages prove his wide range of talent.

One of the youngest stars of the festival was Doruk Görkem Tokur. He was born in January of 1991 in Ankara. The young pianist’s interest in classical music began when he was a child. His father was a classical music choir musician and obviously he was aware of the necessity of raising qualified musicians.

He introduced his son to the piano as the first stage of musical education at the age of five. Now, his son was on stage and whenever he sent  a note, he was shouting the necessity of planting the music interest to the kids at the early ages. Doruk Görkem Tokur has the talents of singing, extemporizing on piano and absolute hearing. İdil Biret, Pamela Mia Paul, Stephen Gutman, Daniel Gortler, Kemal Gekić, Misha Dacic, Aleksandar Madžar, Tamara Poddubnaya, Mykola Suk, Bernd Goetzke, Emre Elivar and Gülsin Onay are the music masters that give him inspiration and knowledge.

After graduating from Hacettepe University, State Conservatory of Ankara in 2012 as an honor student, he carried on his education at Scuola di Musica di Fiesole, Florence with Andrea Lucchesini. Every year, Tokur has been performing at various solo and chamber concerts in the country and abroad.

Quite talented and young pianist Doruk Görkem Tokur was making the audience feel how pure and natural the music was and was presenting a marvelous visual by letting himself flow of the melodies.

Murat Ömür Tuncer, the art director of the festival, which was developed with the primary idea of “Freedom for Phaselis”, performed the closure concert of the event. With the support of his family, Tuncer started his musical education in early childhood and he is one of the shining stars with a great white hope who wants to enable young musicians to express themselves freely and give friendly messages with music.

The young composer, who is fascinated by music, also creates unique works in the field of literature. In this branch of art that intertwines with music, he carries out works on the literary works of poets like Nazım Hikmet, Orhan Veli and Turgut Uyar. Besides, he produces works on geographic themes like Düden and Phaselis, also historical characters such as Hürrem Sultan and Gandhi. Tuncer is the assistant of composer and conductor Selman Ada since 2011 and his works have been performed in both Turkey and numerous countries of the world.

In this open air concert with great participation, besides music feast on different genres, during the festival he gave same feelings to the artists and audiences and provided an opportunity for the interaction between community and art. By the way, a colorful ground table was set with the contribution of the visitors. Home-made delicious salads, pastries and cakes were eaten together with artists on the grass and unforgettable memories were shared along with nice conversations.

At the end of two days, while the festival was ending in a successful way, we would like to thank everybody who brought young artists and us together in Antalya and contributed efforts to the festival.