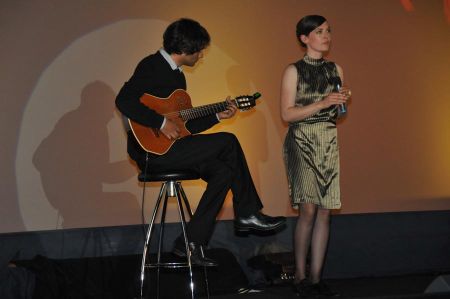 During the gala event of Medien Forum Augsburg we had the opportunity to hear some of the music composed by the group Misuk based on original texts by Berthold Brecht.

Even if, for organizational reasons, it was only a duo from the Misuk group, which actually consisted of four people, who presented texts by Brecht set to music, it was a great success. The songs performed by the truly unique voice of Eva Gold, which were accompanied on the guitar by Girisha Fernando, were very well received by the specialist audience present and also by us, so that we arranged to meet Girisha Fernando for the following day.

The following day we met Girisha Fernando in a small café, which is quiet because it is a bit away from the hustle and bustle of shopping in the old town. He told us about the development of the Misuk group. Here are parts of the interview:

You make music to original texts by Berthold Brecht. This is unusual in two senses.

a. Because musicians often start with the lyrics first and add the music later.

b. Because Brecht's texts were not actually written for singing.

First a note on a. That's not quite right, in popular music collaborations between a lyricist on the one hand and a composer on the other have always been common, for example: Ira and George Gershwin, Rodgers and Hammerstein. Often there is a musical idea first, the text comes later, e.g. with the Beatles and Paul Simon. The desire to convert moods/images into music is often at the beginning and in the foreground.

How did you come across Berthold Brecht?

The band MISUK was initially formed for a one-off concert at the 2009 Brecht Festival. The goal: to place Brecht's texts in a contemporary musical context. A continuous artistic work emerged from the one-off impulse.

Who selects the Brecht texts and according to what criteria is the selection made?

Do you adopt your texts unchanged or also adjust the rhythm of the choice of words for the purpose of a better presentation?

The lyrics are in the original out of respect and legal reasons, but above all because of the already existing, well-flowing rhythm.

Who writes the music for the lyrics and where do the ideas come from? What musical education do you have?

The musical basis for songwriting arises intuitively and spontaneously during jam sessions. All musicians have many years of experience in the most diverse areas of popular music culture, whether electronic music or pop and jazz.

Misuk consists of four/five people as a group. Who are the group members and what musical interests connect the members?

Yes, we are four. Girisha Fernando is on bass and guitar, Eva Gold on vocals, Lilijan Waworka on keys and Stefan Brodte on drums. What connects us is an alert and experimental musical spirit, which always allows us new approaches to the texts. Plus, of course, the nerve-racking rehearsals, beautiful gigs, and the fraternal drinking sessions afterwards.

How long have you been making music together?

Your first CD is about to be released (it was released on August 31st, 2012). Are there sponsors or support for your concept to this day?

The CD will be released by the small independent label Schaf Records.

As we heard there should also be a first tour. Are dates already fixed?

Dates are in preparation and will be announced soon. A series of promotional events are planned in Berlin in November and on December 9th we'll be playing at Sauschdall in Ulm, for example.

One idea would certainly be to combine reading and concert presentation. Does Misuk have any ideas on this?

That would be quite conceivable and certainly one of many possible, coherent formats. So - great!

A tiresome subject: in the field of culture, and your music should also be included, there are unfortunately too often almost empty coffers. How do you imagine a tour? Surely you are all employed and thus earn your “bread”. However, a tour also means farewell to everyday working life with a fixed income.

We're musicians, so we're always on tour. Of course, these must be carried out to cover costs, etc.

Thank you very much for your time and words.

History of the Roman City of Soli on Cyprus