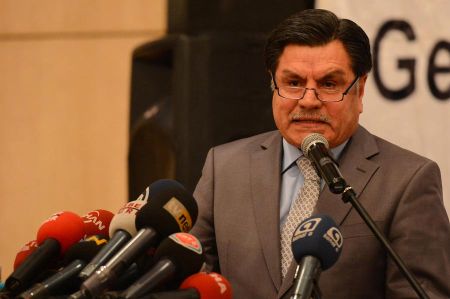 In a lecture entitled “Human Dignity and the Constitution” at Alparslan University, Turkish Chief Justice Haşim Kılıç touched on the violence being perpetrated in Muslim countries and said, “If this is what is means to be a Muslim, then I am no Muslim.” The Chief Justice was attending a ceremony for the opening of the 2013-2014 academic year.

Only rarely does the West get to eavesdrop in on the self-criticism of Middle Eastern countries. In fact, a common complaint here in the West is that Muslim countries are not sufficiently critical of their own shortcomings. However, this perception is, like many perceptions, a skewed view of the truth.

Chief Justice Kılıç made this very clear yesterday. He said, “If we were to just analyze Muslim countries in particular, such as Pakistan, Afghanistan, or India, and even closer to home, Iraq, Iran, Syria, Egypt, Morocco, Tunisiaand Algeria, they are all on fire. They are burning up. It is impossible to speak of human dignity in these places.

We see it every day on television. One day it is a suicide bomber; the next it is a bombing. What kind of culture is this? What kind of faith is this? How can you explain the violence in countries which teach and believe that ‘killing one person is like killing all of humanity while saving one life is like saving all of humanity’.

If this is what it means to be a Muslim, then I am no Muslim. This is impossible.”

This kind of honesty and introspection by Muslims is rarely heard in the West, and it is not often voiced publicly in the Middle Easteither, which is why Chief Justice Kılıç’s comments made headlines.

However, this question, this conversation, this self-doubt is actually rampant in the Muslim world.

There is a Turkish proverb that says, “Stick yourself with the needle before you stick someone else.”

That doesn’t make it easy though. Objective self-evaluation of one’s own culture is always difficult, more so when the application of faith and religion are being criticized. In fact, it can be downright dangerous as hundreds, even thousands, of people have paid with their lives for criticizing the status quo in this part of the world.

Without a conversation of this kind, however, real progress is impossible.

Referring to the recent bombing in Pakistan, Kılıç also criticized violence against non-Muslims. “Where does religion permit one to enter a church, blow it up and kill 80-100 people? How can you explain such violence, such inhumane action with Islam and being a Muslim? There is something wrong here. I am drawing attention to it so that everyone will examine this error more closely. I do not think it is possible that this belief system gives people the right to do such things. This is impossible, but when you look at these violations of (human) rights, you see them in Muslim countries, but not so much in other countries.”

Courageous words in the Middle East. Hopefully, they will not make him the target of radical Islamist groups in his own country.

During the question and answer session following the lecture, the Chief Justice was asked what he regretted most in his career. The answer was telling. “I have been a member of the Supreme Court for 20 years. I have signed verdicts for the closure of 19 political parties. My signature has approved the closure of political parties who hadn’t really done much. Later, I really repented of this. Since 1995, I have not signed any decision to ban parties that simply express their opinions without resorting to terrorism.”

Confession is good for the soul.

Dissent has been muzzled in Turkeyfor decades. The banning of opposition parties was part of the court’s job description.

After the government’s brutal crackdown on protestors this summer, Prime Minister Erdoğan is set to unveil his “democracy package” on Monday. There has been a lot of speculation both regarding the contents and the motivation behind it. Maybe the remorse expressed by Chief Justice Kılıç is catching. Let us hope so, for democracy and freedom is one bug Turkeydesperately needs.

Luke Montgomery, author of A Deceit To Die For, lived in the Middle East for over a decade. He holds an MA in Linguistics, speaks fluent Turkish and writes on foreign policy, religion and culture. You can follow his work at www.lukemontgomery.net, or find him on Twitter at @LookingFor_Luke and on Facebook.