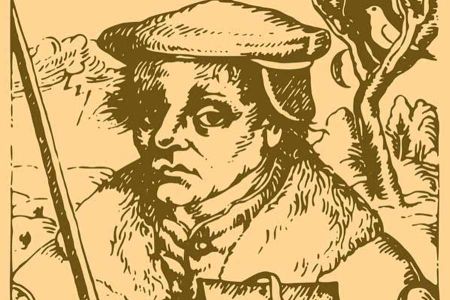 During our visit to Heldrungen Castle, we came across traces of Thomas Müntzer, who as a priest was initially a committed supporter and admirer of Martin Luther.

On July 13, 1524 at Allstedt he had given a speech in front of the later Elector Johann the Constant and his son Johann Friedrich I., the so-called prince sermon. In it he called on the Ernestine princes not to offer any resistance to the cause of the Reformation. In his speech he attacked the social grievances at the same time, which led to the loss of his position a little later. However, his resistance was directed not just against the clerical authorities ruled by the papacy, but also against the secular order, which was shaped by the estates. Because of Müntzer's radical social revolutionary endeavors and his spiritualistic theology, which was reflected in many militant texts and sermons, Luther distanced himself from him at the beginning of the peasant war. 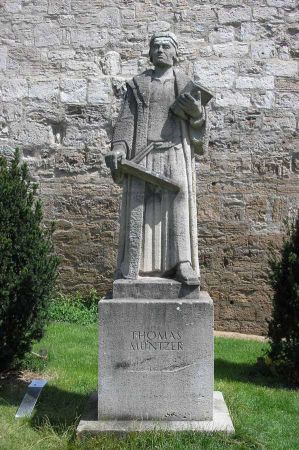 The authentic location of this important event, the late medieval court room, has been preserved to this day.

Müntzer preached about the second chapter of the book of Daniel about the decline of the world empires, the rise of Christianity and the role that authorities had to assume in the time when Müntzer believed the apocalypse was imminent.

The sermon was entitled “Explain the Other Difference of the Prophet Danielis". The princes were asked to set a good example and, with Müntzer, to follow the God-given path to the renewal of Christianity.

If they did not follow this path, however, the sword, the symbol of their rule, would have to be taken from them. This remarkable sermon was immediately printed.

Thomas Müntzer becomes priest in the parish church in Allstedt

From March 1523 Thomas Müntzer was priest of the parish church of St. Johannis in Allstedt. Here he saw the chance to build a “truly” Christian community as it existed in the early days of the Church, and immediately began this work. As the first ever reformer, he held a service here entirely in German and created a service order for everyday life (Evangelical Church Office) and Sundays and public holidays (German-Evangelical Mass). He celebrated the service - following the example of the early Christian communities - with his face turned towards the community. Müntzer's time in Allstedt was one of the most creative of his life. His writings and prints that were created here had a lasting influence on the Reformation.

A just social order is one of Müntzer's goals 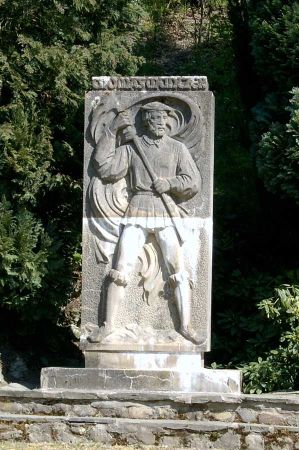 In contrast to Luther, Müntzer stood for the violent liberation of the peasants and was active in Mühlhausen / Thuringia, where he was priest in the Marienkirche, as an agitator and promoter of the uprisings.

There he tried to implement his ideas of a just social order: privileges were abolished, monasteries dissolved, rooms created for the homeless, and a feeder set up.

Ultimately, his efforts to unite various Thuringian free farmers as a peasant leader failed because of the strategy of the nobility. In April 1524 he set up a printing shop in Allstedt, the types came from Wolfgang Stöckel from Leipzig.

The printer of Müntzer mainly was Nikolaus Widemar. In his office in Eilenburg five publications appeared in the branch in Allstedt two.

Imprisoned and beheaded - the end of Müntzer

In August 1524, Müntzer finally fled from the authorities of Allstedt to Mühlhausen, where he worked together with the former Cistercian monk Heinrich Pfeiffer. After his expulsion, Müntzer returned to Mühlhausen at the end of February 1525 and was elected pastor of the local Marienkirche. He took the side of the peasants and became their leading figure in the German Peasants' War in Thuringia. On May 15, 1525, after the battle of Frankenhausen, which ended in the complete defeat of the peasant horde summoned by Müntzer, he was captured and tortured in the fortress of Heldrungen on the orders of Count Ernst II von Mansfeld-Vorderort in the presence of Duke George the Bearded . Imprisoned in the tower of Heldrungen, he wrote his farewell letter to the insurgents, calling on them to stop the further bloodshed. On Wednesday, May 27, 1525, he was beheaded at the gates of the city of Mühlhausen, his body was impaled and his head was put on a stake.

Goethe was also at Allstedt Castle

The world-famous poet and writer Johann Wolfgang von Goethe stayed several times in his function as Minister of State in Allstedt from 1776 to 1782 and in 1779 he wrote three acts of his important classic drama "Iphigenie auf Tauris" here in Allstedt.