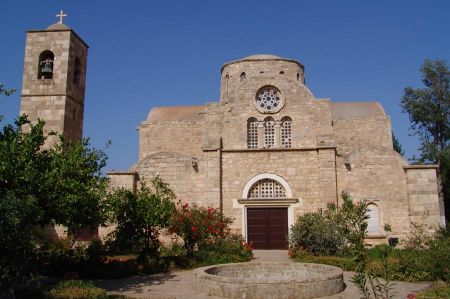 About eight kilometers north of Famagusta and two kilometers west of Salamis you will find the St. Barnabas Monastery and the tomb where the martyr Barnabas is revered to as a Cypriot national saint.

The complex includes the monastery church, monastery building with the Museum of Icons and Archaeology and the grave of the Holy Barnabas. The facility is located on the western edge of the necropolis of Salamis, between the ancient city of Salamis / Constantia and the archaic city of Enkomi.

The monastery is said to have been built in 477, the present monastery church on top of a former building in the 10th century and renewed again in 1756 by Archbishop Philotheos. After departure of the last three monks in 1976 it kept as an unchanged monastery church and as Icon Museum, the monastery buildings are used as an archaeological museum.

The artifacts of the archaeological museum are in particular very rare exceptional ceramics from Enkomi (about 7000 to 1000 BC) and from Salamis, in so far as they have not been exhibited in the Cyprus Museum in Nicosia or in the British Museum in London.

Barnabas origns from the Israelite tribe of Levi, but he was born in Cyprus. According to reliable text of Acts 4,36 EU he was also named Josef (in some manuscripts Joses). Barnabas is repeatedly mentioned in the Bible (Acts, 1 Corinthians, Galatians) and by late translations to the disciples of Jesus, but he does not count on the innermost Twelve Apostles. He is said to have preached in Rome, officiated in Milan as a Bishop and Clemens baptized by Rome.

According to Acts 11.22 to 30; 13.1 Barnabas missionary especially took place in Antioch. In the local community of Jewish and Gentile Christians he was working together with Peter and Paul, he introduces himself there, and the other ones operate. In Acts 13 and 14 is reported that he carried out a mission trip through Cyprus and southern Asia Minor with Paul as a companion. Undeniably Barnabas was one of the leading early Christian missionaries. He was also one of the participants at the Apostolic Council (cf.. Acts 15.1 to 5 and Gal.2,1-10).

The New Testament also reports of disagreement between Barnabas and Paul: On the one hand it was about the possibility of table fellowship of Jewish and Gentile Christians in Antioch (Gal 2.11 to 13). Secondly, a dispute about the entrainment of John Mark turned on another missionary journey (Acts 15.36 to 41).

The early Christian writer Tertullian wrote to the Hebrews Barnabas. In the Barnabas File is reported by his missionary journeys and his martyrdom in Cyprus. The work dates from the 6th century. The Gospel of Barnabas, which is obtained in an Italian manuscript from the 16th century. It was the Christian view until the 14th-16th century, however, another, only in fragment preserved, Spanish manuscript reported that a monk named Fra Marino said to have stolen the gospel from the Pope Sixtus V. library secretly. It proclaims Mohammed as the true prophets and Jesus as his predecessor, who did not die on the cross and not as the Son of God. Therefore, it is argued to own religious views of Muslim side. That is actually an "existed Gospel under the name of Barnabas in the old church, is the Decretum Gelasianum de libris recipiendis et non recipiendis" (496 n. Chr), a directory of permitted and forbidden books. It is assigned fonts to non-canonical (apocryphal) there. In the Turkish newspaper "Türkiye" published on 25 July 1986, a report suggesting that an Aramaic manuscript of Barnabas Gospel on Mount Mem in Uludere (South Anatolia) was discovered. Old Church legends tell of healing sick by Barnabas, by hanging up the sick, the Gospel of Matthew.

The fact that churches and monasteries hardly were named after Barnabas, is because he withdraws entirely in shades of Paul in the New Testament. However, there is a Barnabites Medal, named after a Barnabas Church.
Barnabas said to have died as a martyr in Cyprus according to the apocryphal acts Barnabas where he considered a national saint. According to this legend the year 61 is considered as the year of his death, as a place Salamis is specified in Famagusta.

Two corresponding farmer rules using the name of Barnabas are:
• With its Sens' of Barnabas, come and cut off the grass.
• When St. Barnabas brings rain, there's rich grape blessing.

By Camper or Caravan from Tasucu to Northern Cyprus