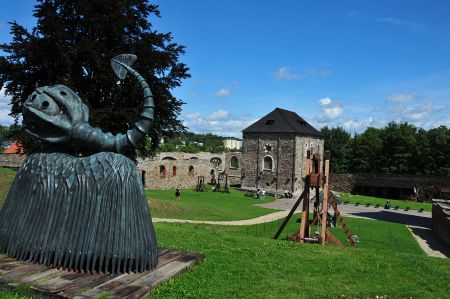 The former imperial palace, also called Eger Castle, was built before the end of the 12th century by extension and reconstruction of the older stone castle, which had been built on the acropolis of a Slavic castle.

From records it can be seen that the name of the surrounding city was still called Egire in 1061, a Slavic stem. In German, the town and also the castle is named due to the river Eger, on whose banks it is situated. The name of the river has Indo-European roots: Agriā has roughly the meaning "the wild river flowing".

From the 14th century Eger and Cheb were documented, in 1374 even in the same text, "Egra in boemica lingua Cheb". The Czech name can be traced back to an ancient form of ohyb (bend) and probably refers to the course of the river at the city. In addition there are the ideas of authoritative historians that the Slavs had adopted an originally Germanic name (Chub) for a hillside over the river.

The Emperor Frederick I Barbarossa began the construction of the Kaiserpfalz in 1179. Today the castle of Eger is the only Staufian imperial palace in the Czech Republic with a completely preserved chapel. In addition to the chapel, a part of the palace, which was still splendid in its time, is still preserved today with unique five-part Romanesque windows and a massive tower, the black tower, built of volcanic tufa.

The angular tower stands on a quadrangular ground plan of 9 x 9 meters, it is 18.5 meters high and the walls are in the lower parts of the tower up to 3 meters thick. The entire castle area was archaeologically explored for many years in all historical contexts and extensive reconstruction work was carried out.

The castle is, however, interwoven with many interesting stories and legends, and with its history many important historical events are combined.

At the time of socialism, the castle inside was used as an amphitheater and summer cinema until 1991. Since the year 1992, the Eger castle belongs to the possession of the city of Cheb.