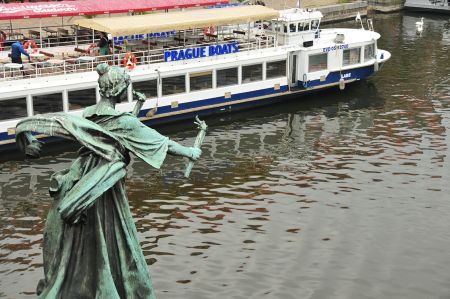 From the campsite "Unter dem Jenzig" in Jena (station 44 in the camper-route.de) we had started going the direction to Prague, one of the most famous tourist destinations in Europe, at least in cultural terms, it has received its nickname "Golden City" correct.

Prague is the capital and most populous city in the Czech Republic and owns the fifteenth position in the ranking of the largest cities in the European Union, with more than 1.2 million inhabitants.

Prague is centrally located in the western part of the Czech Republic on the Vltava river, about 40 kilometers before its confluence with the Elbe in Mělník. A large part of the city is situated in a wide valley of the Vltava river, which flows through the urban area on a length of 30 kilometers and forms a large loop in the north. At the southern edge of this loop lies the historical town center, dominated by the two castle mountains in the north with Hradschin and south with Vyšehrad. The rest is spread over further hills surrounding the valley: Letná, Vítkov, Větrov, Skalka, Emauzy, Karlov and the highest of them, the Petřín. Thus, due to the involvement of the inhabitants, the natural beauty of the Šárecké údolí and Modřanská rokle valleys still exists until today. 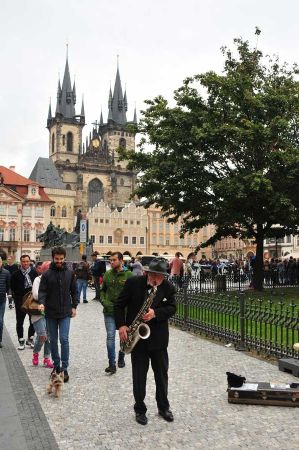 We used to take the highway passing Dresden to the new intermediate location of our route  crossing the Balkan to the south from Jena, the campsite Triocamp, located just outside the city of Prague, which is easy to reach by public transport. From campsite "Unter dem Jenzig" to campsite "Triocamp" it is just 306 km, which is about (please do not forget to purchase the vignette for the Czech Republic, as a caravan user you currently pay 12.50 Euro for 10 days) 5 hours travel, even the border control point was very easy, there were neither border controls nor traffic jam, speak completely without the chaos comparable to Salzburg or Passau.

Prague is the historical capital of Bohemia and was a significant royal and imperial residence in the Holy Roman Empire, especially among Luxembourgers and Habsburgers. Prague was first mentioned in the 10th century. However, its environment is densely populated since early history. The Slavic settlement started in the 6th century in an area that had been inhabited by the Germanic Markomans for more than 500 years, and even earlier by the Celtic Boers. After the construction of two castles by the Přemyslids in the 9th and 10th centuries, Jewish and German merchants came into the country. 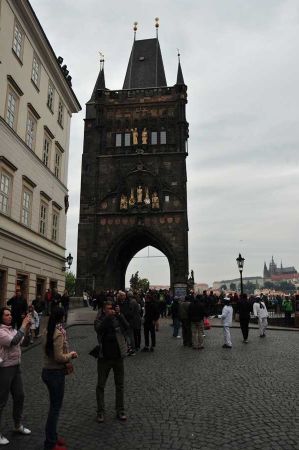 Around 1230 the settlement became a royal city and in the 14th century, Prague became a political-cultural center in Europe. In 1348, the first university in Central Europe was founded with the Karls-University. The Conservatory and the Technical University are among the oldest in Europe. For centuries, Prague was a city where Czech, German and Jewish culture met.

The historical center of Prague is recognized by UNESCO as one of the 12 World Heritage Sites of the Czech Republic. The "Golden City" today shows a closed cityscape characterized by Gothic and Baroque. Sights such as Prague Castle, the Charles Bridge, the medieval town hall clock, the Old Jewish Cemetery or the oldest active synagogue in the world make the city a popular destination for tourists. With more than five million foreign tourists a year, Prague is one of the ten most visited cities in Europe.

Later on we report more about Prague, because it was first visit to the family-run place Triocamp, whose owner speaks very good German, which opened all year round and left a very well-kept first impression. Unfortunately the sky was heavily cloudy, which should not be much better in the coming days. But we always follow the motto, there is no bad weather, just wrong clothes.