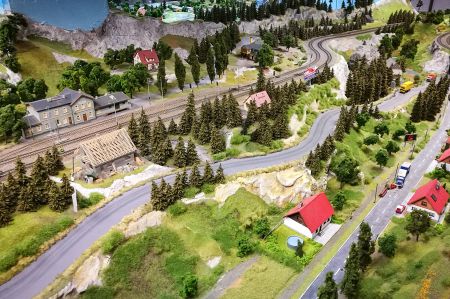 After some walks together with Jana and Lucinka from Prague, which had led us through the mountains of Macedonia, specifically along the border with Albania, we stayed in contact by email.

So it was obvious that we would visit the two during the trip to the north also. Said and done. Far ahead in the season, in addition cold constant rain, let then the plans of another city tour through Prague fail. After a bit of research on the internet, an alternative visitation decision was made, which we would like to reproduce here almost the same words:

Are you looking for an interesting place in Prague where both children and adults can enjoy themselves? Not only on rainy or cold days?
So Jana had presented us the advertising slogan on the website, ".....then you should visit the kingdom of the railway"!

And since we wanted to adapt today's visiting destination from an ecological-sensible point of view, the use of the subway to get to the city center was also clear from our outset. Of course there were memories from the student days when Prague was an absolutely interesting destination for some studying trips, where just one subway line was available for its use at the time. We were also curious about this today.

The Kingdom of Railroads - large-scale plant in Prague

A few years ago, the largest model railway system in Central and Eastern Europe saw the light of day. From the idea to its realization, a long way, which could be realized in Prague - Smíchov on July 1, 2009, is realized, because the first 115 m2 of the Mini-Kingdom were opened. This first construction phase represents a trial version of all later used technologies that were (and will be) used in the individual segments of the whole kingdom. At regular intervals, new parts of the track system are being created, which will present the individual regions of the CR and, in the end, will represent the entire republic with its landmarks in a connected complex on a total area of more than 1008 m2.

From the prospectus of the operator community we read:
If you visit us, you will have a unique view of a railroad-networked model area with lots of finesse. Our models drive, shine, open, react to changes of day and night and some can be controlled even by you! The cameras above the railway tracks give you an insight into the details of the railway tracks and the various landmarks of the CR, such as: Ještěd, Střekov, Křivoklát, Karlštejn etc.
But that's not all, the kingdom of railways has a whole range of complementary exposures, didactic panels and a series of interactive elements. Of course, you can refresh and recover in a play area.

Description and orientation plan of the model plant

You'll see hundreds of meters of rails, dozens of railroad models, model cars, intersections, models of landmarks and more. There are more than 3 500 m2 of fun for children and adults, in 3 floors.
The entrance fee also includes the unique, interactive model of Prague! Here you will find all subway lines, nature parks, main cycle paths or cable cars, as well as important sights, museums etc. The separate representation of the city model of Prague (1: 1000) occupies an area of 114 m2. This corresponds to the area of Prague of 11,812 hectares - which corresponds to 23,525 football fields!

The first three model track layouts with the designation K 1 - 3 represented the trial version of the whole project. They occupy an area of 115 m2 and are located on the gallery in the first basement floor. These tracks were put into operation on the occasion of the opening of the exhibition on 1 July 2009. They are not a concrete area, it is the imagination of our modelers. An exception is the K3. Although it does not have a role model in a real area, it does provide an insight into a fictitious little town in the Czech Republic around 1980, that is, during socialism. Model ČR - II. Etapa

The track system, which represents the Czech Republic, is gradually being built according to individual regions and in the end there will be more than 900 m2 in a connected complex. This large room offers the 2nd basement of the Kingdom. Already in 2010 we opened the first two regions - the regions of Aussig and Karlovy Vary. In 2012, the Pilsen region was opened, with the Central Bohemian Region being the most difficult capital in all respects. The last is the South Bohemian Region, which will complete the whole factory in 2014. Although the track layouts do not correspond to the outlines of our country either as a whole or in individual regions, nonetheless, all the more, you will be able to enjoy the true places of our republic that our model makers have so faithfully imitated. They are for example the model of Ještěd, the Prague Castle, the Elbe Waterway, the Church of the Assumption in Most a. m. m.

Exhibition of the locomotive Thomas

In the kingdom of the railroad, there are also many didactic and entertaining supplementary exhibitions covering the whole world and history. You can look forward to the Europe-wide exhibition of the locomotive Thomas, to the unique Šíp paper model of Prague, to the largest exposition of the current LEGO production, and so on. For fun and entertainment, there are the POMPO children's play area, full of toys, the two movie theaters, where film-themed films and LEGO films are shown for children, XBOX, ETS u. m. a.

Prag - further destination of our camper-route.de to the South