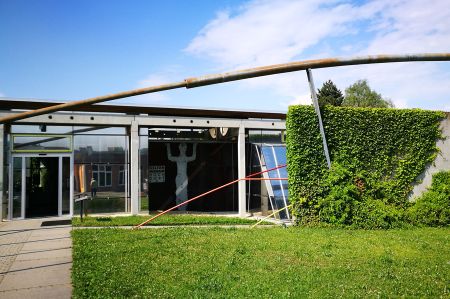 After our visit of the Celtic Museum in Hochdorf, Rainer led us along the biking route to the outskirts, where there is a huge Celtic hilltop, which was reconstructed after the excavations.

With a height of about six meters and a diameter of 60 meters it is one of the largest of its kind. In 550 BC a "prince" of the Hallstatt culture was buried with great effort and rich grave giving's. The location of the tomb was carefully chosen: From the hill, you have an unobstructed view of the Hohenasperg to the east, the presumed princely seat.

In 1977, a hobby archaeologist discovered uneven stones in a field which indicated a cemetery which was no longer visible. The grave remained protected from discovery and looters as long as the grave was flattened except for an imperceptible elevation. It was just the stones that had appeared during plowing what brought the honorary employee of the Land Memorial Office to the track of the old plant for research.  Grave 48°53'19.9"N 9°00'34.7"E 48.888849, 9.009634

The competent authority responded immediately: the suspicious area was explored in 1978 and 1979 under the direction of archaeologist J. Biel. It soon became clear that this was a complex Celtic grave from the last third of the 6th century BC. In addition, there was the rare fortune that this grave had not been haunted by former graves. And there was the unique opportunity for the archaeologists to use modern methods to make unique observations on the metal supplements and the organic materials such as leather, textiles, plants and wood that were preserved thanks to excellent conservation conditions.

With the construction of the museum, as well as other cemeteries and foundations in the region, a cycle path was also established, which is also suitable for hikers. This approximately 30 km long cycle or hiking trail is well signposted, leads from Asperg via Eberdingen to Ditzingen through a wonderful landscape and is suitable for an entertaining and informative excursion by bike or in hiking boots. The stations can be selected as desired or can only be used in sections. Our starting point was the museum in Hochdorf, since here is a large parking lot, which can also be used by campers.

The Celtic Cycle Route connects nine foundations of Celtic culture south-west of Ludwigsburg. From Ditzingen (or vice versa) it leads first to the "Krieger von Hirschlanden", a place of life-size statue from the Hallstatt period and ends on the Hohenasperg, which was the Celtic prince's seat in the 6th century BC. Signposts with short texts explain the individual sites. The Celtic Museum Hochdorf with the original faithful replica of the tomb chamber and the tombs of the nearby Fürstengrab hill is an absolute highlight of Celtic art. The stations in detail: