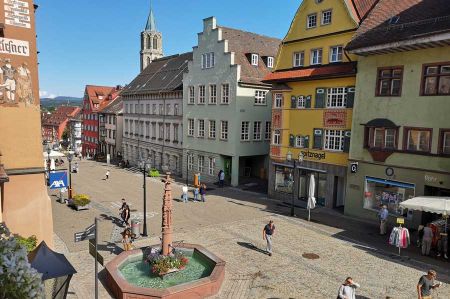 Another highlight for us was the visit to the Old Town Hall of Rottweil, about which is first documented in 1321.

Thanks to Christiane, we were able to enjoy a brief tour of the fascinating construction and design techniques of the last centuries with some explanations. Around 1480, the town hall was extended to the neighboring Tigisheimsche House in the west and around 1500 by adding a late-Gothic facade the outwardly uniform design was finished. In 1521, the Council Chamber on the second floor underwent a complete redesign with the installation of the coffered ceiling. According to the structural investigations, in the years 1552/53 the roof structure was completely rebuilt, whereby genuine carpentry was in demand. 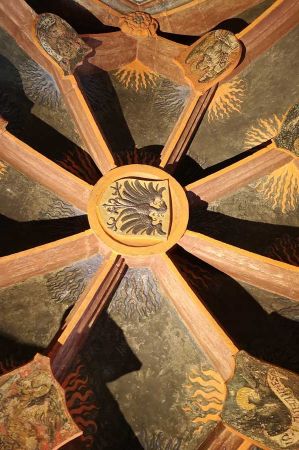 Incidentally, the stained-glass windows of the Council Chamber date from 1553 and 1554. In 1578, the courtroom on the first floor was renovated and the stairwell was moved from the back to the interior (probably around 1583). Built in 1564 along Rathausgasse, this two-storey extension was raised by one and a half floors in the 17th century. Together with the town hall, it receives a new façade with paintings by F. Geigis from Freiburg in 1884. With the redesign of the town hall in 1913, the paintings are removed and added the ground floor by two wide pointed arches on the main road side. In 2001, as part of the renovation of the façade, the plaster was renewed and the roof dormer repaired.

Building inserted in the former cityscape

The design of the town hall is a three-storey corner building, whose pitched roof is unilaterally eroded to the east and cantilevered over a grooved cornice. The ground floor is structured to the south side of the eaves through four reshaped arched gates with fluted garments. In the two upper floors at the same axis four-part stone post windows are located, which are divided in the middle by stone crosses. The upper floor is also separated by a cover of the underlying projectile. The simple round arch door on the east side is surmounted by a balcony supported on consoles. 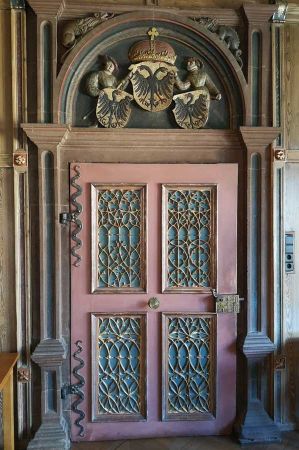 On the first floor is the former courtroom: a two-aisled hall with a chamfered plank and beam ceiling. Niches are grouped on a stone pillar around the four-part façade windows, dating back to 1578.

The neighboring room (the civil registry office) has a late Gothic, blasted plank beam ceiling, with triangular trabeculae, lily and heart leaf carving on the heads and Tartschen as a central motif.

On the second floor is the mayor's office. Incidentally, the stained glass paintings date back to the first half of the 16th century.

The Council Chamber is illuminated on two sides by large four-part windows in the arched niches, the glass windows here are partly dated back to 1553/54. The ceilings and walls are completely paneled, dating back to the year 1521. A large tower oven, dating back to 1761, once provided warmth here.

On the corner building of the town hall and main street standing massive construction is obtained as a core framework aligned to the main street roofing as a horizontal roof structure in two roof levels. 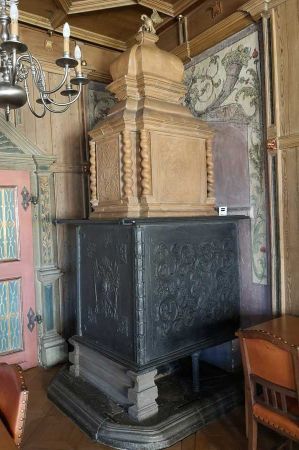 In combination with a center-standing chair, the racks drawn into the roof beams or into the throat beams carry purlins. Attached headbands stabilize the node in the transverse direction and extend from the horizontal uprights on the clamping bar to the throat bar. The foliage of the center stand erected in the 1st DG is also covered with leaves. The same stand in the 2nd floor is not stiffened.

The described construction supports the rake triangles, which are equipped with two flattened throat bars and tapped into the roof beams. The roof is made entirely of softwood and has a roof pitch of about 53 degrees.