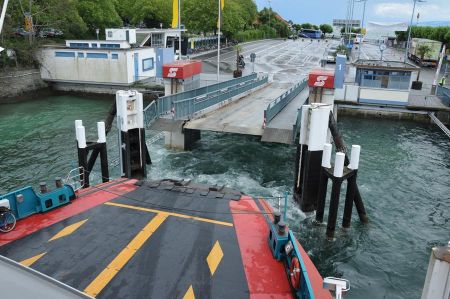 During our travels along Roman roads, we were traveling from Augsburg in the direction of Zurich when the decision was made to lay the route in such a way that a Lake Constance passage from Meersburg to Constance was on the way.

The entire Lake Constance region can also be described as very steeped in history, although the region was covered by the Rhine glacier for a very long time. No finds from the Palaeolithic are known on the lake shore, there are only finds from the Mesolithic between 8,000 and 5,500 BC, which indicate hunters and gatherers, not settlers. The finds of stone tools from the Mesolithic prove this quite clearly. 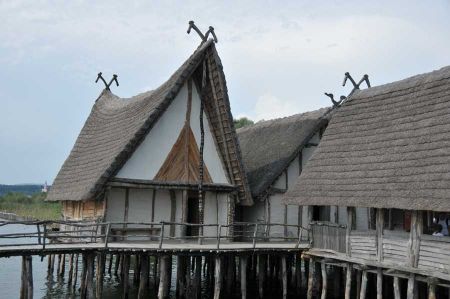 So-called pile dwellings, which can be regarded as the first human settlements on Lake Constance, did not appear until the middle and late Neolithic on Lake Überlingen, on the Bay of Constance and on Lake Obersee. Such a wet soil settlement has been reconstructed in Unteruhldingen and is now used as a museum village for visitors. When we arrived at the lake shore, however, the sky was so heavily overcast that we postponed our visit to the stilt village to a nicer day. Up until around 800 BC, such pile-dwelling settlements were repeatedly built on the shore of Lake Constance. These buildings only disappeared at the beginning of the Iron Age and other ethnic groups pushed into the shore regions. 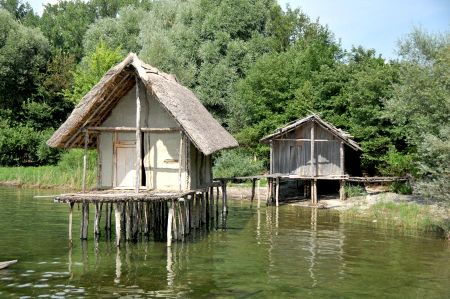 During the Hallstatt period, which is characterized by burial mounds that were found under the riparian forests, the residential structures were also changed. From now on, agriculture is practiced on a large scale. At this time ethnic groups called Celts immigrate. During the La Tène period from 450 BC. The construction of the burial mounds also decreases, as could also be proven from the first writings and finds from this time. 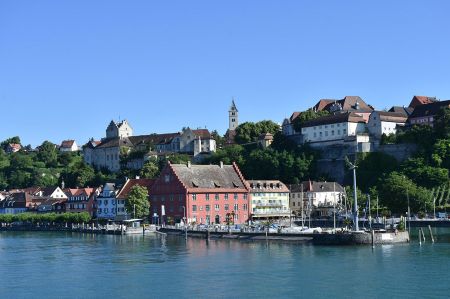 With the expansion of the Roman Empire during the Alpine campaign in 16/15 BC, during which there was also a naval battle on Lake Constance, the incorporation into the Roman Empire took place. And as always under Roman rule, the country is now being surveyed for the first time, in the case of Lake Constance by the Roman geographer Pomponius Mela. In the year 43 AD he travels along the shore regions and distinguishes the different parts of the lake by name, so he describes the upper lake as Lacus Venetus, the lower lake as Lacus Acronius, both of which are traversed by the Rhine. A little later, in 75 AD, the Roman Pliny the Elder explored the region and named the lake Lacus Raetiae Brigantinus, very probably because of the city of Brigantium, now Bregenz, which was expanding under the Romans. Again only a little later, Brigantium received Roman city rights and became the seat of the prefect, who also managed the Lake Constance fleet. Now Constantia, modern Konstanz, Arbor Felix, modern Arbon and Lindau were also increasingly Roman expanded. However, the Romans only settled in the hilly regions of Lindau, since the direct shore was considered a swamp region. 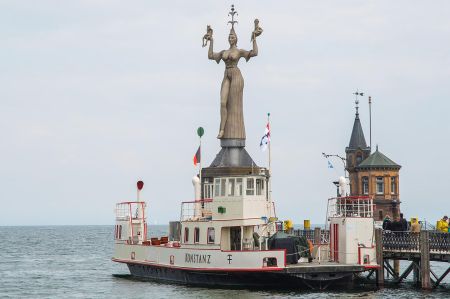 The first lakeside road also goes back to the Romans, which ran from Brigantium via Arbor Felix to Constantia around 200 - 300 AD. With the Alemanni, new ethnic groups invaded the Lake Constance region from 260 AD. After the slow but steady retreat behind the Rhine line, further Alemanni settled in the 3rd century first on the entire northern shore and later also on the southern shore of the lake. With the increasing Christianization of the Lake Constance region, the founding of the Reichenau Abbey and the bishopric in Konstanz strengthened the new faith in the population. Later, the Hohenstaufens even held their Diets at Lake Constance. Due to the trade turnover between Germany and Italy, Lake Constance had become an important trading region. 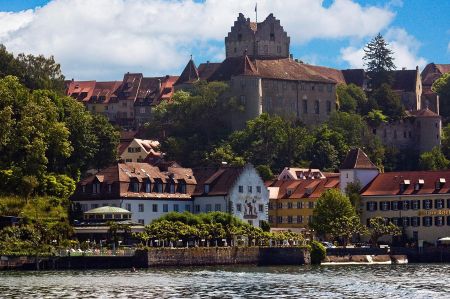 While the historical name of Lake Constance goes back to the Celtic tribe of the Brigantier, Lake Constance is called Lacus Potamicus in Latin from around the 9th century. But where does the name Lake Constance come from, which probably goes back to Wolfram von Eschenbach, who was the first to use the name Bodensee or Lake Constance. At the western end of the Überlinger See lies the town of Bodman, which was of national importance for a certain time in the early Middle Ages as a Franconian royal palace, Alemannic ducal seat and mint. Perhaps the origin of the name can be traced back to this place in the form "lake on which Bodman lies" = Bodman Lake. Maybe it's just the "Germanization" of the Latin name "Lacus Potamicus", which became Lake Bodam and eventually Lake Constance. 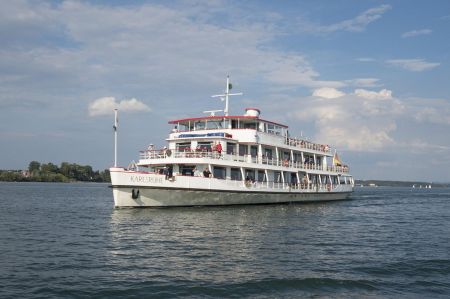 During the 15th century, the alternative name Lacus Constantinus became widespread in the Catholic-Romance-speaking world, which probably goes back to the councils of the Catholic Church held in Constance. Constantia, on the other hand, probably owes its name to the Roman Emperor Constantius Chlorus from around 300 AD.

Unfortunately, as already mentioned, the weather was not on our side this time. Constant rain and cloudy skies didn't really let us enjoy the crossing from Meersburg to Konstanz either. We had hoped to take some nice pictures of the Alpine panorama in the background and, if possible, the lake crossing in the sunshine. But well, the weather god was not with us.

Lake Constance is not just the ferry service 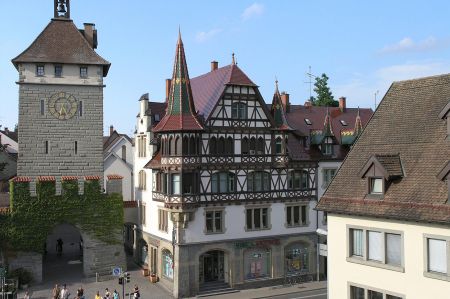 The embarkation went without any delay, almost exclusively working people were on the way. And so we, dressed in thick rain jackets, used the short crossing to Constance for a few photos on board the ferry, which immediately attracted the attention of a ferryman. We quickly got into a conversation and learned more details about Lake Constance, its residents and the heavy rush of tourists during the warmer months of the year, which means that public boat traffic on Lake Constance is not just the ferry service for the two car ferries from Meersburg to Constance and from Friedrichshafen to Romanshorn, but also like to include the so-called White Fleet on Lake Constance in their leisure time planning. There is a fast catamaran connection from Constance to Friedrichshafen, which cyclists also like to use to halve the otherwise very long journey around Lake Constance. In general, traffic routes and development at the lake are designed for pedestrians, cyclists and boaters. Motor vehicle traffic is left out a bit. 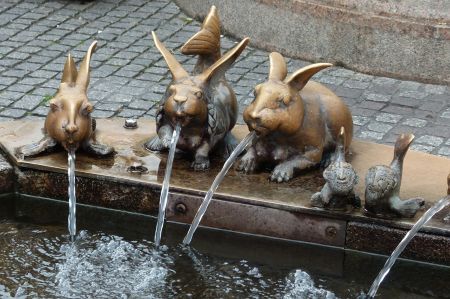 There are numerous other passenger ships on the lake, but mostly seasonal ones, which offer a very dense program of tours and special trips, ranging from brunch and dinner trips to dance and party trips to themed trips, in short it's actually always something going on at the lake.

Another phenomenon, which can of course be easily explained scientifically, is the fact that no matter how good the weather is, you will never be able to see the other shore of Lake Constance in the longitudinal direction. Responsible for this is the curvature of the earth, which is responsible for the fact that the southeast-northwest extension of 65 kilometers in length already causes a bulging of the lake surface of about 80 meters. It is therefore close to the shore from a human perspective, even with excellent distant visibility; Let's say from Constance in the west, Bregenz can be seen, which is only 46 kilometers away as the crow flies. The elevation of the lake from this distance is already 41 meters. An interesting finding, we think.

We are slowly approaching the shore near Constance again, so that our seaman, who is so familiar with the area, has to do his job again. He is responsible for the docking manoeuvre, as he tells us as we leave. Then we better not stop him!