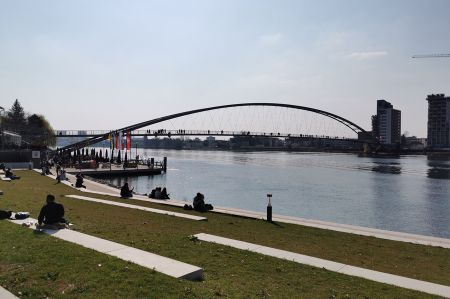 A customer visit had taken us to the Weil am Rhein area, an opportunity that we naturally wanted to use to explore the region. So we had found accommodation at the entrance to Weil, which should enable us to walk through the Rhine via the well-known Dreiländerbrücke (French Passerelle des Trois Pays).

At first we were a little surprised about the large industrial plants in the immediate vicinity of our hotel, but the view from the window also enabled us to see the border crossing to Switzerland and the Dreiländerbrücke from far above, which is the longest arched bridge in the world for cyclists and pedestrians.

The Dreiländerbrücke connects the German town of Weil am Rhein in southern Baden and the French town of Huningue (Hüningen) in Alsace, making it possible to cross over from Germany to France on foot without formalities and controls. The name Dreiländerbrücke (Three Countries Bridge) already indicates that another country is involved, as the Swiss national border is less than 200 meters from the bridge.

Plans for the three-country bridge led to a state treaty 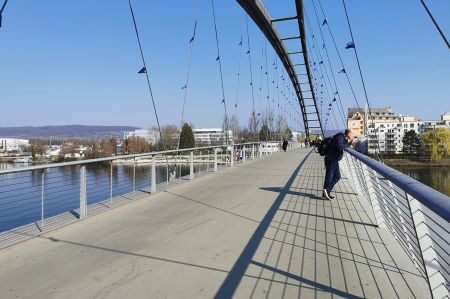 The Dreiländerbrücke connects the western part of the city of Weil am Rhein and the Friedlingen district with the eastern district of Huningue, which of course we wanted to explore. In order not to disturb the line of sight between the main street in Weil and the opposite Rue de France to the central market square in Huningue, the three-country bridge was built offset a few meters from it. The actual point where the three countries France, Switzerland and Germany meet is about 150 meters south of the bridge. On the hamlet side, right next to the bridge, is the Rheinpark, a large restaurant with a wonderful terrace on the bank, and a large shopping centre.

A Franco-German state treaty was signed before the bridge was built. The striking arch construction is intended to symbolize the strong connection between the two states. The bridge and its construction has received various architectural and engineering awards. The Dreyland Dichterweg, which leads over the Dreiländerbrücke to France and then to Switzerland, also starts right at the Rheinpark. Alemannic poets and their works are presented on two dozen panels along the way. 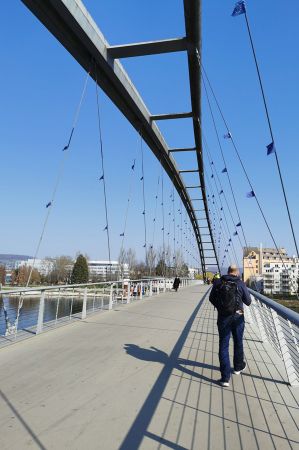 At 229.4 meters, the Dreiländerbrücke, an arch bridge with a central lane, has the longest span of a pedestrian bridge in the world. Its total length without access ramps is already 248 meters. The archway measures only 20 meters, the crest of the arch is a maximum of 26 meters above the water, the bridge deck is about 14 meters below the crest of the arch. The width of the bridge deck is 5 meters in the middle of the bridge, which widens to 7 meters on both banks. It is connected to the embankment with ramps and stairs. There is also an elevator on the French bank.

The steel supporting structure of the bridge is asymmetrical: on the north side of the bridge deck there are two vertical arches with a hexagonal 900 millimetres hollow cross-section, which bear the main load. On the other side is a steel tube arch of the same size that is inclined inwards. The arches are connected by narrow trusses. They are stored on concrete pedestals close to the shore. The stronger, vertical arch faces north, while the southern arch is inclined at 16 degrees and is formed by a steel tube with a diameter of 609 millimetres.

As in a modified tied-arch bridge, the bearings take only the vertical forces, while the horizontal thrust of the arches is conducted by struts into the bridge deck above, which acts as a tie, thereby neutralizing the horizontal forces. Eye rods between the ends of the bridge deck and separate concrete plinths acting as tie rods in the shore area counteract upward forces. The bearing of the ground foot points on the French bank side is realized in the northern arch by two, in the southern arch by three universally movable spherical cap bearings. They rotate on different radii, but towards the common centre.

The bridge deck consists of an orthotropic plate, which is slightly curved in the longitudinal direction in order to keep the clearance gauge required for Rhine shipping. It is attached to the arches with fully locked steel cables. The ropes are arranged at an angle so that they are anchored close to each other in the arches or the bridge deck at the top and bottom. A total of 805 meters of cable with a diameter of between 30 and 60 millimetres were used for the steel cables.

Arriving at the three-country bridge, we were surprised by the hustle and bustle on site, because there was a colourful hubbub of voices in different languages, far beyond German and French. Especially Turkish was present everywhere. We first crossed the bridge to take a little tour of Huningue, but soon returned to the bridge. A break with a small meal on the Rhine terraces, where we wanted to take advantage of the evening sunshine, was just too tempting.