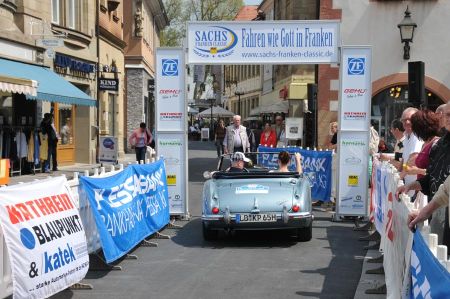 We contacted the organizing team of the annual Sachs-Franken-Classic by email and then arranged to meet the local manager, Rainer Greubel, who is responsible for marketing issues, for the Friday morning during the welcoming ceremony for the arriving participants in Bad Kissingen.

A relatively short journey, because it is Just a few kilometers from Albertshofen to Bad Kissingen that also led us through the beautiful valley of the Franconian Saale. Around 10.30 a.m. we arrived at the destination, where there was initially a problem with finding an adequate parking space. Then, after a first, friendly welcome coffee and a piece of homemade fruit crust, a solution to the parking lot problem was found ... in the middle of the vintage vehicle fleet. We were quickly absorbed in the first conversations, from the participating vehicles, their drivers and the individual exercises to be carried out during the rally to the sections of the route.

Function control at the market square in Bad Kissingen 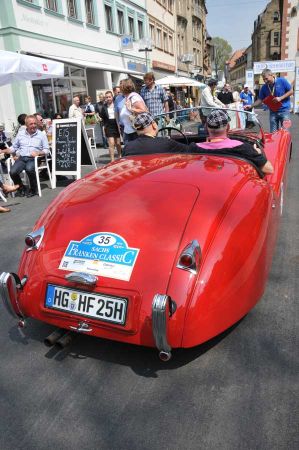 Of course, there was already a kind of hectic but always very friendly, helping hustle and bustle among the many voluntary helpers on the entire welcome area, because around 12.30 p.m. all vehicles should undergo the technical function check on the market square in Bad Kissingen before the first exit with some exercise elements could start. Despite all this hectic pace, there was always an open word for arriving participants or questions about how to get to the technical test center between all those involved, a very friendly atmosphere conveyed the feeling of an overall relaxed, professionally run event with at least 150 participating vehicles and thus well over 300 pilots together with their route guides.

We followed Mr. Greubel to the market square of Bad Kissingen, where a first small course had already been set up, on which the basic functionality of the vehicles was also checked by employees of TÜV Bayern. Every driver of a vehicle had to submit a completed form with the technical data of his vehicle. In addition to checking the lighting, turn signals and brake lights, the inspectors also paid attention to the technical rally equipment, because according to the registered class, just corresponding auxiliary devices are allowed. In the so-called hourglass class, for example, no electronic timing device may be used when passing special tests between two light barriers with a speed measurement, just mechanical clocks are allowed. The odometers in this class may just be driven mechanically. Stopwatches may only be operated without batteries, cell phones are generally prohibited. If a participant does not act according to the rules, points may be deducted.

Promoter Hagemann inspires you to linger 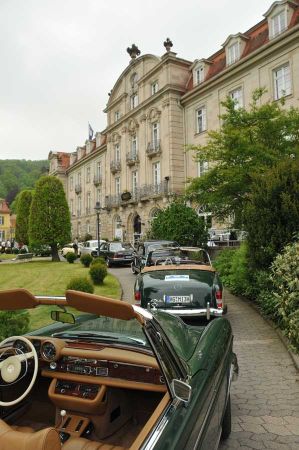 Gradually, in the following three hours, all participating vehicles appeared on the market square of Bad Kissingen, so that more and more new impressions made many passers-by linger on the course. A very important point was the explanations about the vehicles, which left no doubts about an excellent specialist knowledge in the field, a specialist without any doubt: Michael Hagemann. The Munich promoter Hagemann was able to contribute a large number of stories and technical details about the participating vehicles, which, peppered with little anecdotes and stories, made the true fan of the vintage high-gloss boxes recognized. The oldest vehicle in the field was proudly presented: the Bugatti Type 38, a racing car from 1926.

The basic procedure of the rally has been tried and tested for years, but is slightly modified every year: On today's Friday before Pentecost, the participants arrive in Bad Kissingen from midday and report to the rally office. The technical control of the vehicles in front of an audience on the market square is followed by a voluntary prologue with three practice AFPs and a coffee break in Bad Brückenau, so that the following schedule for today's Friday resulted as a prologue: 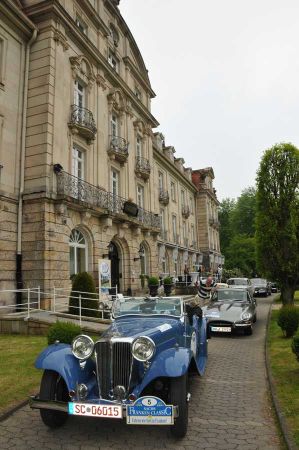 The cars glide through the landscape at a moderate pace in sections, but the special stages in between are tough. In order to offer the spectators an interesting spectacle, many of the special stages are set up within localities - to the delight of drivers and spectators.
Rally leader Karlheinz Schott is particularly keen to bring as many pre-war cars as possible to Bad Kissingen, as they are the treasures of every classic car event from both a technical and a visual point of view. The minimum age of the vehicles is 30 years. Because aesthetics shouldn't be neglected either, two juries evaluate the vehicles and their occupants in a Concours d'Elégance in Bad Bocklet (Saturday, May 18, from 5:30 p.m.) and in front of the Casino in Bad Kissinger Kurpark (Sunday , May 19, from 3 p.m.). Schott emphasizes that without the hospitality of the spa town of Bad Kissingen, the openness of the cities and municipalities in the area in general and the sponsors - above all ZF Friedrichshafen AG at the Schweinfurt location - such a large event, organized down to the smallest detail, would not be possible. Well over 400 volunteers ensure that everything runs smoothly. The “hard core” of the voluntary organizing committee, consisting of the ADACFClubs MSC Zellingen and AC Karlstadt, works for almost a whole year towards the next event. The 14th edition of this classic car rally, which is now valued all over Europe, also brings with it a charitable element, in that all income and donations related to a wine tasting will flow to the Schweinfurt table as part of the supporting program.

Around the course in the Porsche 924 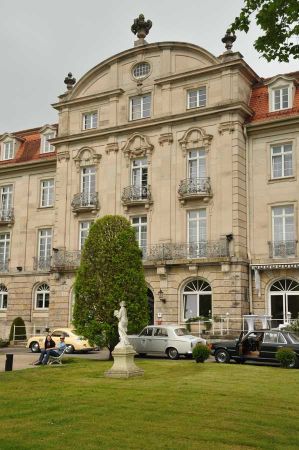 Once again, luck is at our side, because Rainer Greubel invites us to take a tour along the prologue route in his youngtimer, a Porsche 924. This gives the opportunity for further discussions on one hand and to explore the routing and some intermediate tests for the participants on the other hand. From Bad Kissingen it goes via Poppenroth to Katzenbach, where another special test is pending for the participants. Here, a certain section of the route must be driven through in as precise a time as possible on the basis of a time specification. Photoelectric barriers at the start and end of the section measure the deviation from the specified time to the hundredth of a second. As in many sections, numerous spectators gathered during the prologue. We also try, of course outside of the valuation, to meet the timing as precisely as possible. It also works up to a tenth of a second.

Via Oehrberg, Singenrain, Schönderling, Unterleichtersbach and Oberleichtersbach, you continue to the Bad Brückenau public baths. After driving through the first part of the prologue, the participants gather here for a coffee break in the extensive park, time for us to have a coffee, to have further discussions with the participants and to arrange photos of the parked vintage cars. The backdrop of the historic buildings of the Parkhotel together with the vehicles forms a delightful sight that can only be seen once a year because of the rally. 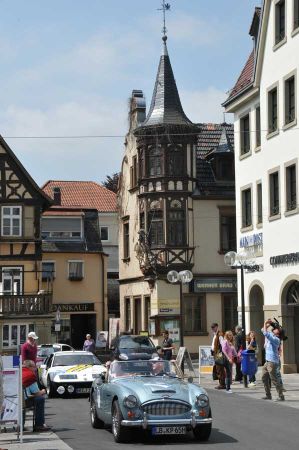 We slowly make our way back to Bad Kissingen via Schwärzelbach and Oberthulba, not without making a few stops on the way to photograph the passing vehicles from different perspectives. In the meantime, word of our activities within the field of drivers has got around and we are greeted with a wide variety of horns, tones or flasher signals.

In the evening, the participants are officially welcomed by the organization team, first and foremost by the rally leader Karlheinz Schott, who, as the moderator of the opening speech with lots of information and explanations of the following events, also recognizes himself as the expert organizer of the 14th ADAC Sachs Franken Classic gives. With a lot of applause, Karlheinz Schott dismisses the driver field a little later to the buffet that has now been set up outside. With musical accompaniment, the participants will find time to exchange ideas with already known participants or to make new contacts. Among other things, we meet the Obernburg cabaret artist Urban Priol, known from the program “Die Anstalt”, who has been participating in the ADAC Sachs Franken Classic for years, this year with a frog-green Renault 15 from the 1960s.

Vintage motorcycle races on the Nürburgring