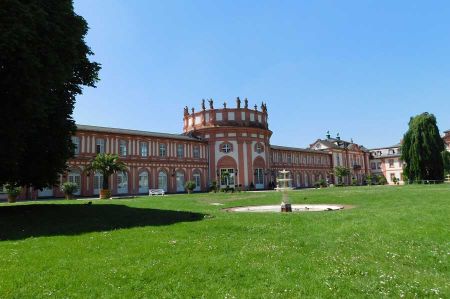 For some time now, we have had business contacts in Wiesbaden, which, due to the really well-working Internet connections, could be managed by email so far.

The expansion of this relationship should now lead to visiting Wiesbaden and getting first impressions of the city during a small city tour. We therefore set the agreed appointment in downtown Wiesbaden in the early afternoon, so that we had enough time for a city tour in the morning. As the meeting point, we had chosen a café directly at the Protestant market church, built by Carl Boos in the years 1853 to 1862, which due to its five towers, is still the tallest tower which measures 98 meters, can be seen as a landmark that can be seen from afar. To date, the main tower is the tallest building in the city and is considered to be the largest brick building of the Nassau House, often referred to as the "Nassau State Cathedral", which was built in Berlin based on the model of Schinkel's Friedrichswerder Church.

And as so often when we are on the road with Brita, we were lucky this time, because right on the passage to the market square we came across, a tourist guide waiting there who wanted to start a tour at 11:00 a.m. It was easy to talk and it turned out that this lady was actually planned for English-speaking tourists, because she came from Milwaukee / USA. Very interesting, so our thoughts: An American explains the German city of Wiesbaden to us. However, we have often shown Antalya to Turkish visitors as well, part of the area of ​​cultural globalization. When at shortly after 11:00 a.m. just one German couple wanted to take part in the city tour, the tour guide also changed the language to German in consultation with the tourist information. And there was a range of information that we would like to limit to our hot springs and their history, which were initially highly anticipated. 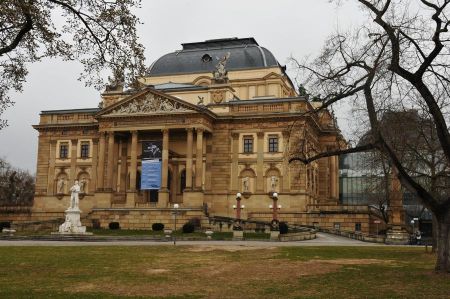 As in some other German cities, the history of Wiesbaden begins with the appearance of the Romans in antiquity, who quickly recognized the advantages of the presence of hot springs and thus laid the first fortifications between 6 and 15 AD. In his work "Naturalis Historia" of the year 77 AD, Pliny the Elder reports on the hot steam and the bubbling water around the fortress. A first settlement called Aquae Mattiacorum developed quickly. The name comes from the ethnic group of the Chatti tribe of Mattiakers living here in the meaning "The waters of Mattiaker". The inscription "Aquis Mattiacis" (dedicated to the waters of the Mattiaker) can therefore also be read on the Wiesbaden Kurhaus, which was built in modern times. Aquae Mattiacorum had already become the main town in the Roman administrative district of Civitas Mattiacorum in the province of Germania superior by 121.

The Roman bathing world of antiquity is still known worldwide today and so the bathing and spa culture of the Romans was quickly established in later Wiesbaden. The city became more and more a spa metropolis. Even today, Wiesbaden is famous for its saline thermal springs, which can be used for various spa treatments for rheumatic diseases and catarrhs ​​of the respiratory system. The applications take place as bathing cures, drinking cures and swimming cures in thermal water. In the city centre there is a large number of hot springs, which have temperatures between 46 ° and 66 ° Celsius and have an output of around 2 million litres of water per day. Only in Aachen are there even more bubbly sources of around 3.5 million litres a day. These sources have been bubbling since the days of the Romans and some of the sources are still open to the public, as we should learn a little later. Our American city guide took us to the so-called Kochbrunnen, which brings about 66 ° hot water to daylight and is the most productive source in Wiesbaden with 500,000 litres. The city guide was of course well prepared and handed us small drinking cups so that we could take a sample from the mirror source directly next to it. As already suspected, we first tasted the salt content quite clearly, otherwise the taste of the water was difficult to classify but it was hot, which led Brita to use the drinking vessel with the hot water to warm up her hands. Detailed information was provided by the information board attached to the fountain, which referred to all the ingredients in the source and also contained information on the maximum amounts of this water that can be drunk each day. Of course, the information on the applications depending on the clinical picture was not missing. 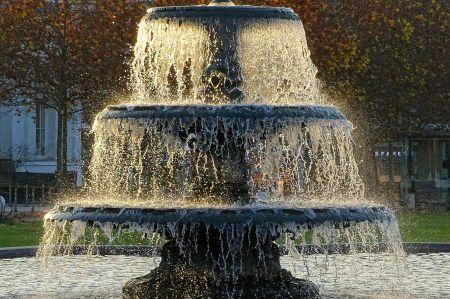 We continued our tour of the city and then came to the bakery well tap, where we were offered another sample. A recognizable different taste indicated a different composition of the minerals dissolved in the water, but this spring water was also salty. But we also tried this spring, this time a bit more reserved about the water temperature. However, it turned out that caution was not appropriate here. We learned a lot of other details about the sources and still existing thermal baths, such as the Roman-Irish Kaiser-Friedrich-Therme, which is fed by the Eagle Spring, the Nassauer Hof, the Schwarzen Bock, to name just a few. Of course, the hot springs and their applications always moved well-known people to Wiesbaden, such as Johann Wolfgang von Goethe, Fjodor Dostojewski, Richard Wagner and Johannes Brahms.

As rich as the city was in thermal and mineral springs, it was always poor in drinking water sources. The fountains in the city only gave warm and salty water, not suitable for permanent enjoyment. The drinking water required in the city had to be brought into the city from the field marker. How the Romans solved the drinking water problem of their time has not been extensively researched, at least there are, as far as we know, no viaducts from the surrounding mountains as they are known at Aspendos, Cologne, Side or on the Pont du Gard. The first drinking water fountain was the market fountain on the Schlossplatz, which was built in 1564/66 after a freshwater pipe was installed from one of the field fountains into the city. This line was made from hollowed-out tree trunks, which were undoubtedly very susceptible and of course were constantly rotting. There was often a lack of money to replace trunks in good time, so that the water quality left something to be desired. This is certainly one of the reasons for the frequent epidemics among the population. There was no money for lead lines, yes, with the Thirty Years' War on the back of the neck, it was just possible to put the market fountain back into operation years later. Not to mention supplying individual houses like in the times of the Romans. It was not until 1753 that the market fountain could be restored to the extent that the citizens could draw fresh water there. However, the piping system still consisted of hollowed-out tree trunks that were 3060 shoes long up to the field well, which corresponds to approximately 872.1 meters. 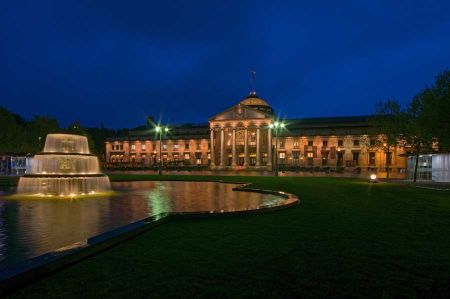 Cast iron water pipes were not laid until 1810, and in 1821 the city's water consumption increased immensely, which led to the opening of a further nine fountains. Now the water was brought from the forest district Kisselborn to downtown Wiesbaden, at least 6 kilometers away. More and more wells had to be added, the water remained scarce. It was just between 1875 and 1910 that four mined tunnels were dug, which drilled the water-bearing quartzite veins of the Taunus Mountains over a length of approximately 11.5 kilometers and were thus able to ensure a continuous and crisis-proof water supply for the first time. Now, with the help of these deep tunnels, drinking water quality of a maximum of 22,000 cubic meters could be brought into the city every day. These four tunnels, Münzbergstollen, Schläferskopfstollen, Kreuzstollen and Kellerskopfstollen, are still used today. Supplementary sources of supply were found in the Rhine meadows near Schierstein and developed for the city with the construction of the Schierstein waterworks. Today, Rhine water is also taken from the little-polluted middle of the river, clarified several times and fed to the groundwater via so-called swallowing wells. The floor passage that the water has to cross then takes about 6 weeks before it is removed again 180 meters further south by drinking water wells. Today, the Schierstein waterworks supplies about half of the required Wiesbaden drinking water, which has a daily capacity of around 40,000 cubic meters.

With the lost World War I, Wiesbaden's reputation as a world spa town was also lost, or the area of ​​application increasingly changed towards spa and specialty clinics. Today there are numerous general medical hospitals and cosmetic private clinics, so that besides the spa and special clinics there is again hectic activity in the healthcare sector in Wiesbaden. An interesting tour is available to visitors along the fountains and thermal springs, which are open to the public. Seen in this way, Wiesbaden is still a spa town.