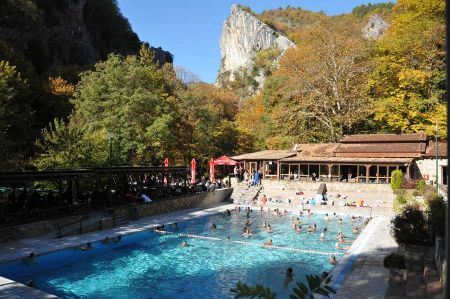 The coming weekend also indicated cloudless skies and therefore very pleasant daytime temperatures, so Toni from the Zampetas Camper Stop in Thessalonica made the suggestion to go to the mountain region of Orma on Saturday.

Several times Toni had reported about the local hot springs Pozar Loutraki Aride, which is used as a thermal spa offering some natural pools right next to the river next to some artificial pools with a small fee for entry. Thus, together with Sven we had decided to go to the thermal bath, an absolutely worthwhile tour, in the sense of meaning further recommended, especially since there is a separate place for campers, even with electricity, if you want to ask for connection.

From the Camper Stop Zampetas to the thermal springs there are exactly 132 kilometres to drive, the area also offers the visit to the water city of Edessa and the visit to the ancient Capital of Macedonia called Pella, which in ancient times was capital of Alexander´s Kingdom of Macedonia. For the culturally interested campers it is said that there are other ancient sites in the region, f.e. the famous tombs of Philipp II at Vergina. From the relatively flat coastal area around Thessalonica we turn away from the 4-lane expressway just before Edessa in the direction of Orma, a likewise visitable village on already 160 meters above sea level with narrow village streets and many small restaurants, once enjoyed good times as a tourist destination. We ask about the thermal bath, as we mistakenly suspected them in the village of Orma itself, but then still have to continue a few miles further towards the border with Macedonia.

The thermal bath is well visited - bathing also in the river

It is a beautiful autumn day, which welcomes us at the thermal bath, the leaves of the lush deciduous forests reflect the sunlight in the most magnificent colors. Almost you can start dreaming. The thermal baths show up as a huge complex with a variety of pools, as natural bordered rock pools to which the hot water in covered gutters is passed. Of course there is a restaurant as well as various cafe terraces, because now at the weekend the bath is very well attended. Many people do not come just to bathe, which incidentally is almost everywhere free, but also to hike in the beautiful mountains in the area, so there are some hiking trails that run along the river on the plateaus. Immediately we decide to come here for a few more days at a later time, too much lure the possible routes to the border with Macedonia.

Good for diseases of the circulatory system, the respiratory tract, rheumatism, gynecological and skin diseases

But enough of the preliminary talks, the hot water of the thermal bath lures too much. So swimwear, wrap a towel and off we go. We find an almost empty pool right on the shore of the ice-cold stream and are located a little later in about 70 centimeters deep, but very pleasantly warm water of the basin. The floor consists of fine sand, bordered by washed out stones, which also radiate a very pleasant warmth. No wonder we spend hours in the pool. Every now and then thickly packed visitors come to the pool, who do not understand that it is not the cold river water in which we bathe, but warm thermal water. No wonder in the immediate vicinity. The healing properties of water are recommended for diseases of the circulatory system, the respiratory tract, rheumatism, gynecological and skin diseases. It should also be noted that drinking cures for diseases: liver, kidney, bile, stomach and urinary tract, have a healing effect.

Pitch just above the pool in Pozar Loutraki Aridea

In the vicinity of the bath is still easy to see what a thriving business once must have prevailed here, so there are some guest houses, yes, even a small hotel, which was built into the rocks. Here an economically oriented concept and the entire system could be the visitor magnet of the region, from which many profit. Well, maybe it's the campers once again, who ensure internationalization of bathing facilities and thus once again encourage some movement for local development. We can only give each camper a recommendation for the really interesting options here on site. Come on, it's worth it! Also in November swimming in the open air.

Our last visit to the thermal bath showed, that the most natural pools along the river have been closed by building another terrace. And cause it was a National holiday, it was too much crowded, from our point of view. Who does not like, please come during the week.