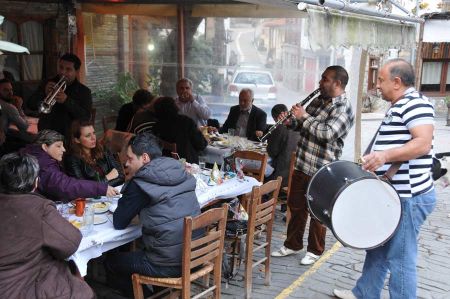 Despite the dark, fast looming stormy clouds, Daniel wanted to show the idyllic village Kato Vermio to us, about 24 kilometers from Veria in Imathia, Central Macedonia province.

Kato Vermio applies as the highest village in Greece, after all, between 1,400 meters and 1,549 meters of height. Since there are only about 95 kilometers on the way back to Thessalonica, we agreed on Daniels plan, especially as he promised some extraordinary village life with a delicious dinner afterwards.

Kato Vermio is both village and municipality in the district of Veria, counts about 75 inhabitants in an area of 38 square kilometers. So, really small and idyllic. We were following the serpentine winding road, higher and higher. On reaching the village we went to the village square on a narrow street on the ridge of the mountain, just one-line development on the right and left was possible, so steep it went downhill. Only upon reaching the village square there was an expansion, which then led up to the summit in a further narrow window dust road.

We wondered about the numerous cars on the square in the center, so that hardly a gap for passage could be found, no chance without precise parking and turning. No problem, as Daniel mentioned, people come to eat and maneuver just a little, if it is to go back. It soon became clear why so many people counted in relation to the inhabitants were there, as we noticed the many restaurants and taverns. Kato Vermio normally is a ski resort. Accordingly, there are many restored and partially added new parts to the cottages, chalets in the village. The climate in summer is quite cool but very snowy in winter. The ski lift from Seli was the first lift, which was built in Greece, after all, already in 1934 this happened. Most residents of Kato Vermio are Greek-speaking Vlachs.

Once arrived, the restaurant Daniel had chosen, was very busy, so we decided to first take a short tour through the village. Despite the dense clouds, no rain fell, so nothing spoke against the scheme.

After our return to the local even a village band had gathered, which gave a serenade for their best. When the musicians were almost intrusive, at least in terms of its volume, other guests quickly commanded to stop.

We enjoyed a delightful village meal in the manner of a meat stew, in which various vegetables were cooked with. It was already dark when we began the return journey to Thessalonica.

Stop in Alexandroupolis at modern Via Egnatia