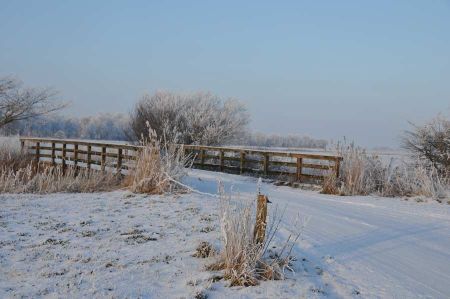 Early in the morning the weather forecast had warned of fog banks and freezing drizzle, which in the north often can quickly lead to incalculable ice on the roads.

On the other hand rime on trees and shrubs gives impressive natural spectacles, especially when the sun breaks through. Trees look liked powdered with sugar then. Today, there is such a day as you, dear reader, will be able to see from the attached photos.

Rime is referred to the almost solid precipitate which is formed from super cooled water droplets of light fog or directly from the air contained in the water vapor through resublimation. As resublimation the immediate passing over of a substance from the gaseous to the solid state is described in thermodynamics. Each substance is at its resublimation free the so-called sublimation, which is equal to the sum of melting and evaporation heat. This process can be observed, for example, very well in the freezer compartment of a refrigerator. When the water contained as water vapor in the air, is in contact with the cold walls of the ice-box inside, is directly fixed without passing the physical state over flowing water previously. The result is an icy cooling compartment which has to be defrosted from time to time.

For this purpose, a very high relative humidity of about 90% and an air temperature of below -8 ° C is necessary. The heat is delivered here by convection to the surrounding air, thus Wind increases the formation of frost. The wind should also not be too strong, since it would otherwise destroy the delicate ice structures. It created especially upwind needle-shaped ice crystals in the form of six-pointed dendrites, which can reach a considerable size and bizarre shapes and thereby usually grow slowly. Rime is growing against the wind, because the windward incoming air carries a higher degree of humidity than in Lee in itself. The phenomenon of the formation of frost occurs comparatively rare and is often confused with frost or rime ice, for which there is a kind of intermediate stage.

After the early morning fog had ensured appropriate moisture, it was the light wind, that grows the rime on trees and shrubs. The longer this process takes correspondingly large is the weight of the ice on branches and twigs. It often occurs as a result to damage caused by frost in the trees, which are referred to in the forestry sector as a fragrance break. We were lucky that shortly afterwards the sun could break through the fog, so that a series of impressive pictures were taken. But have a look and enjoy the pictures:

Love Locks at the Hohenzollern Brücke at Cologne