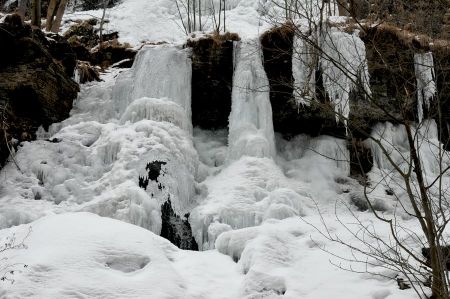 Our early spring tour high in the cold north of Germany was finished and we decided for a short trip to the Harz Nature Park on the way back, a small stopover, which should interrupt the journey and at the same time convey further impressions.

The still prevailing frosty outside temperatures suggested that even in the Harz snow and ice still had the upper hand and so the first goal of the short detour was leading to the Romkerhaller waterfall in the Harz Nature Park. Years ago, we were fortunate enough to see the waterfall in the "frozen" state, so we were curious to see which image awaited us right now.

We left the A7 motorway and then drove in the direction of Goslar not passing the old imperial city with the most important imperial palace in Germany and the World Heritage Rammelsberg on the main road 82; Goals that alone are worth more than a day's stay. However, we had divided our tour today a little differently and so we crossed Goslar in the direction of the district Oker, where we then turned right on the highway 498 in the direction of Clausthal-Zellerfeld. After about 4 kilometers we reached the Romkerhaller Waterfall and the corresponding "Smallest Kingdom of the World Romkerhalle". The road always runs parallel to the Oker river and climbs to the waterfall to about 335 meters above sea level, as the GPS gave us this information. Just about 200 meters away from the waterfall you will see the Romkerhalle hydroelectric power plant, which produces electricity from the water power of the Oker Reservoir, which is just 1.5 kilometers away.
An artificial waterfall but still beautiful and eye catching

In 1862 Romkerhalle stepped out of the shadow of history for the first time: King George V of Hanover (1819-1878), also Duke of Cumberland and Teviotdale, Earl of Armagh and bearer of the venerable Order of the Garter built his new hunting lodge, though the Welf since his youth was blind. The still existing building Romkerhall belong to the former hunting seat. In order to lend its idyll even further gloss, King Georg V let flow a part of the water of the Oker influx Romke by an approximately 350 meters long ditch to the rock cliffs of the east flank of the Okertals below the Huthberg - derive at the foothill opposite his hunting seat, which resulted in the Romkerhaller waterfall. An artificial waterfall, however, which does not have the same in the Harz mountains, it measures a stately 64 meters high. As the last king of Hanover King George V ruled the Kingdom of Hanover between 1851 and 1866 and give away his hunting seat "Romkerhall" to his wife Queen Marie (1818 - 1907), a princess from the house of Saxony.

In addition to the stately building and the idyllic waterfall Georg V had also provided for a special "condition" of the only about 6,000 square meters large plant: He declared the territory community by virtue of his office and imputed it directly to the crown of Hanover. Something reminiscent of the legendary story of the forgotten soldier on the lonely Pacific Island, which continues to think, even after fifty years, that there is still wartime: With the end of the monarchy after the First World War, Romkerhalle was simply forgotten in the course of territorial reforms. Even with the territorial reform after the Second World War, there was no assignment. Whether it's sloppy or accidental in history, Romkerhalle remained community-free and was then proclaimed by smart business people as the smallest kingdom in the world.

Kingdom of Romkerhall - the smallest kingdom in the world!

Similar to the saying "The whole of Gaul is occupied by the Romans, ... no small village is still resisting, ..." in the stories of the legendary Asterix and Obelix village, a small castle in the Harz claims for itself, the smallest kingdom to be on earth where there is no democracy but a monarchy. However, all travelers are assured that there is no national border or any other conditions, all residents have German passports and live according to law and order in Germany. However, it was quite serious idea to energetically inspire the area of tourism by proclaiming this estate as a kingdom. The conditions were met, because the special status is still preserved.

In the Middle Ages an important mining region (which is why Goslar became an imperial city), since the 19th century the Harz region has been one of the most popular tourist destinations in Germany. Frequently used hiking routes, spas, caves and baths, mines and pure nature attract many tourists, why not additionally a kingdom. Already in 1988, clever minds had discovered this place and its allocation gap and occupied with the real princess Erina of Saxony as a monarch, this was elected as the ruler, introduced the King Thaler as currency and the "Royal Order of Ritter zu Romkerhall ". As often in history, there were considerable inheritance disputes with the death of the ruler in 2010, so that the succession to the throne is still unclear, because of that the throne is not occupied. Order of knights and former governor Baron Lechner could not agree. Romkerhall is still represented by the president and designated successor princess Susanne. Who knows how the story will develop in the future with the "smallest kingdom in the world".

Today Romkerhalle is a hotel with at least 25 guest rooms, a restaurant and due to the Romkerhaller waterfall popular destination, which is marketed as "Kingdom of Romkerhall - the smallest kingdom in the world!". The restaurant officially belongs to the administrative district of Goslar, the accommodation costs are limited and the location is predestined for extensive Harz migrations and excursions: the Oker reservoir, the imperial city of Goslar, the stalactite cave Baumannshöhle, the peat house with Brockenaufstieg, just to name a few destinations,

From Romkerhall steep paths lead up to the south located Ahrendsberger cliffs and to the northeast on Huthberg Mausefalle and from there to the Kästeklippen. From the Ahrendsberg cliffs you have a beautiful view of Romkerhall and the waterfall. A bit west lies the Rabenklippe. Down the river a path leads along the steep cliffs surrounded Oker. The rocks are used especially on weekends as climbing rocks. There are countless large boulders in the river between small islands which have occasionally formed from floating materials, including the engagement island, which can be reached via a wooden bridge, which is included as number 116 in the system of the postmarks of the Harzer Wanderadel. For those who want to get involved, the island is available with an engagement bridge and a hearty knight's meal can also be booked. Courageous couples can even be married in the royal hall. This ensures a variety of interests.

After countless photos of the frozen waterfall, we continued our journey towards the Oker reservoir and Clausthal - Zellerfeld, then unexpectedly encounter a replica of an Easter bunny made of snow.

A last greeting to the now hopefully soon winter.