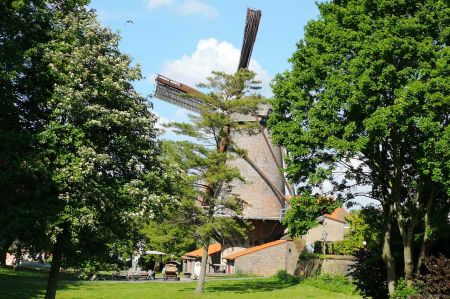 Every year, about 800,000 tourists visit the city of Xanten, located in the northwest of Germany, mostly because of its historic center, but also due to the archaeological park of the Roman Colonia Ulpia Traiana and the leisure center with its distinctive cycling and walking routes in the relatively flat terrain of the Rhine meadows.

We too had long been willing to visit this city once, but not just because of its Roman cultural heritage.

Xanten is also the starting point of the cycling routes Roman-Lippe-Route and Via Romana, station of the 2-Country-Route, the Lower-Rhine Route and the Rhine-Biking Path as well as the station of the European long-distance hiking trail E8. In addition to these route systems, Route 4, which runs from Nijmegen to Cologne along the Rhenish Route, also leads pilgrims through Xanten. Riding our bike paths at least once in sections was our thought during the journey to Xanten.

Cycling and city exploration with friends from Xanten 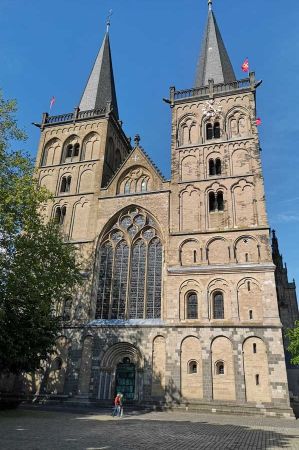 We had an appointment with Andreas, who once again wanted to spend his weekend in Xanten and as a local distributor for e-bikes always carries a few bicycles, which we wanted to test at the same time on the occasion then. This time it was the HNF XD 2 Urban and the HNF UD 1 bikes, both with Bosch drive and continuously variable belt-driven gearbox, that make shifting even at standstill possible. Just set the saddle to the right height and we could start.

Departure of our today's tour was the relatively new tourist facility of the recreational port Xanten as part of the leisure center on the Xantener Südsee. Established in 1979, the Xanten Leisure Center is a recreational center comprising the Xanten North Sea and the Xanten South Seas, the leisure harbors in Wardt, Vynen and Xanten, a water ski facility and a high ropes course as well as a large number of other offers that are still to be expanded. The extension of the Archaeological Park, which in the future will cover the entire area of ​​the former Colonia Ulpia Traiana, is now being implemented. The main road 57, which used to divide the area into two halves, has already been relocated to the new ring road, the Varusring. At present, the two Roman halves of the park are gradually growing together.

The Bislicher Island nature reserve, which in parts is even located in the city of Xanten, is one of the few floodplains in Germany that is one of the most important winter quarters of Arctic geese and home to the only beaver population in the Lower Rhine. The floodplain landscape was first created by water engineering measures around 1788, initiated by Frederick the Great, which led to a reduction of the Rhine bed and to today's course of the Rhine. More about this later in a separate article, now we first went through the city center along part of the old city wall, then into the city center. 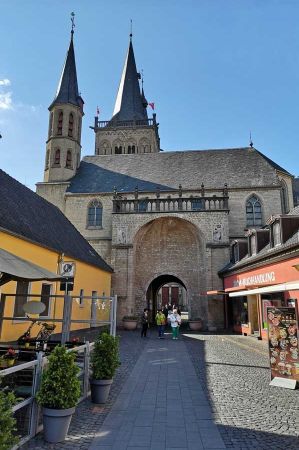 The gothic St. Vitus Cathedral with the Abbey Library and the Abbey Museum, which exhibits rich church art treasures and documents from the history of the cathedral, bears witness above all to the medieval heyday of Xanten. Built from 1263, this is considered the "largest cathedral between Cologne and the sea". The cathedral, the Klever Tor, the Kriemhildmühle and its counterpart, the Siegfried Mill, as well as the Karthaus and other historic buildings characterize the image of the medieval city center. From the former fortifications of the city a stone tower on the west wall, the sea tower, a round tower on the west wall, the pig tower and a round tower on the north wall have been preserved, which were mostly remodeled during the 18th century. The central gate, built in 1392, bears witness to the former division of Xanten into the northern and southern parts of the city. Some parts of ​​the Abbey immunity Bishop's Castle and of the wall have been preserved from the 10th century. Built as a cornerstone of immunity, the 11th-century Romanesque tower is part of the Xanten Marian School.

Built around 1540, the Gothic House is considered an outstanding example of late Gothic architecture on the Lower Rhine. It describes vividly, through its original preserved woodwork (beamed ceilings and attic), the active preservation of monuments in Xanten. The poor maiden house from the late 16th century was built to give the women working in the Viktorstift a home for their twilight years; directly opposite the Arme-Mägde-Haus stands a gothic stepped gable from the 15th century. 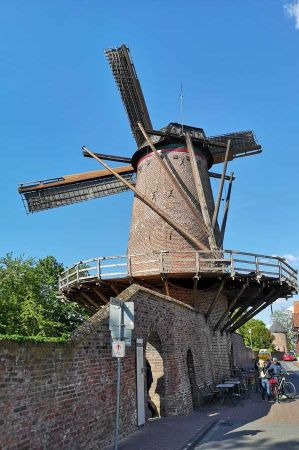 In addition to Gothic architecture, other architectural styles have been preserved, including rococo façades on 18th and 19th century buildings, the Baroque pavilion on the eastern corner of Immunity, and the Renaissance oriel of 1634.

The 1648/1649 built on the southern ceiling of the abbey immunity Protestant church remained nameless. The church tower with its curly hood dates from 1662. The Fürstenberg Chapel was built in 1671 and is reminiscent of the Benedictine monastery Fürstenberg, which lasted almost 500 years, was destroyed in 1586. The town hall of the city was originally built as a Capuchin monastery. The statue of the Victor on the elevated site of a Hohenstaufen capital at the former court of the cathedral chapter was designed in 1468 in honor of Victor Xanten. The Obelisk de Pauw Napoléon was built in 1811 in honor of Cornelius de Pauws. Numerous wells and pumps exist in the city, such as the market pump from 1736 and Norbert of Xanten reminiscent Norbert fountain.

The Alte Kornbrennerei is the only surviving monument in 19th century Xanten industrial history. In 1853, the plant was built as an oil mill and converted to the steam grain distillery 20 years later.

Through the city gate we leave Xanten and drive along the huge area of Colonia Ulpia Traiana on a disused and converted railway track changed into a bike path route out into the countryside, more on that later, too.