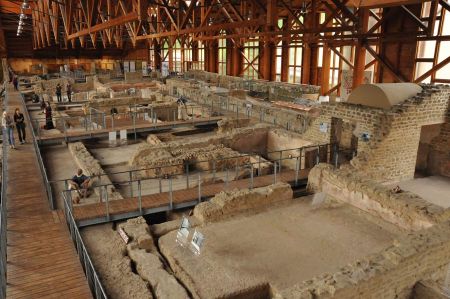 After a hearty breakfast the next morning in the hotel in Remagen, we made our way to the Römer Villa Rusticae in Bad Neuenahr / Ahrweiler at around 9.30 a.m.

At the reception we had the planned route briefly confirmed and so we arrived at the museum building around 10 a.m. The shape and design of the museum building clearly shows what a great coincidence must have played the decisive role in the discovery of Villa Rustica: Almost the entire area of ​​the Roman settlement buildings are to be covered with this protective building within the road system around. 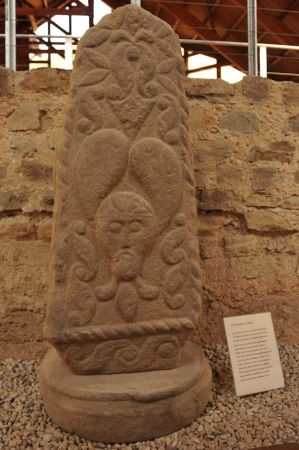 It was more than just a coincidence when the remnants of the Roman buildings were found during the expansion of federal highway 267 in March 1980. The planning provided that at the north-western exit of Ahrweiler a departure of the B 267 should be built deep into the rubble. Since there was no knowledge or tradition of ancient buildings in the region, one was astonished when the excavator suddenly shoveled Roman masonry in large pieces and with intact wall painting onto the trucks ready for departure and drove off towards the landfill. It was another coincidence that on this day, March 23, 1980, the voluntary employee of the Koblenz Monument Office, Mr. Carl-Heinz Albrecht, was present on the construction site and was thus able to prevent the loss of the “Villa Rustica” monument.

The masonry still protruded up to 1.50 meters above the foundations, so that large areas of the wall painting could be seen on the plastering of the walls. In some cases it was even possible to prove the window openings, as well as the entrances to the doors. As a result of these finds, the planned roadway was rerouted by the end of 1980 and a protective structure was built. Between March 1980 and autumn 1990 a total of eleven excavations were carried out under the direction of the conservator Horst Fehr, which, in addition to the remains of the wall and its painting, allow deep insights into the building technology. 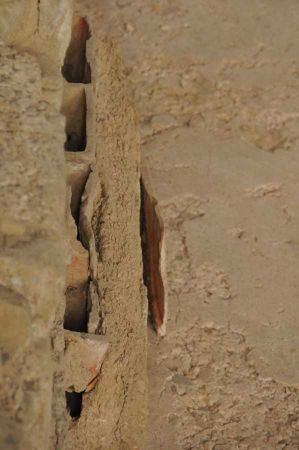 As in many Roman buildings, there was also an ingenious system of hypocaust heating using hot smoke, which in this property even escaped through fine channels in the walls and thus also heated them up. Despite the large number of different constructions, we had not seen such an arrangement of heating channels before. The double floors were put on in the usual type of construction with round or angular stone slabs, which after 5 layers enlarged in diameter formed a dense floor slab in the following layer, on which the Roman screed was then applied. It can be seen very well in one of the rooms, which was probably opened with force by stone robbers, at least that is what the breakthrough edges indicate.

We are well aware of the water supply and disposal techniques used in many other Roman buildings. Here in Bad Neuenahr-Ahrweiler, the channels for the service water supply and the sewerage can be seen very well, so that the care taken in the planning of the system as a whole is immediately noticeable. As usual, the thermal bath and utility rooms are also included. Also noticeable is a room in the middle of the building, which probably once served as a secret escape room, because apart from a narrow entrance in the corner of one room, it did not contain any other opening to other rooms. From the design of the passage in the corner of the wall, one could even deduce the possibility of locking by means of two strong doors, which certainly once closed the openings well camouflaged. 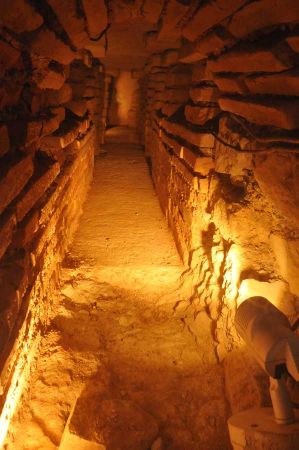 In addition to the knowledge of the Roman building itself, the structures of the original population by Celts and Eburones are shown very clearly on display boards and pictures, so that the connections and transitions between the peoples are quite clear. Due to the changing exhibition themes, which take place next to the ancient Roman buildings, a skilful presentation of the cultures side by side in a museum building has been achieved. The excavation results have been systematically processed since spring of 1993.

The museum concept of the Roman villa in Bad Neuenahr-Ahrweiler also includes changing special exhibitions on other Roman topics related to the Ahrweiler excavations.