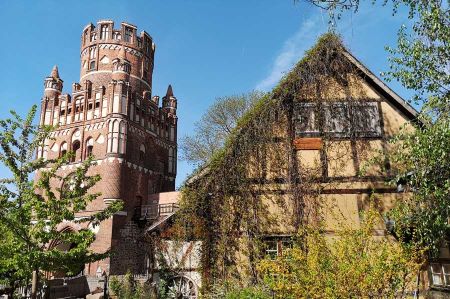 Stendal is located in the north of Saxony-Anhalt, is the largest city of the Altmark and is one of the oldest cities in the old Mark Brandenburg. Thus one finds the first documentary mentioning of the place already from the year 1022.

A document supposedly issued by Emperor Heinrich II in 1022, in which the village of Steinedal appears among the possessions of the Michaelis Monastery in Hildesheim, is, however, a fake of the 12th century. The serving as a template authentic deed of Henry II does not contain this place name namely. The Brandenburg Margrave "Albrecht the Bear" founded a market in his village Stendale in 1160 and gave the Magdeburg city law to the place. Excavations confirmed that the development had begun in the area of the market south of the "Old Village" in Stendal as early as 1160. 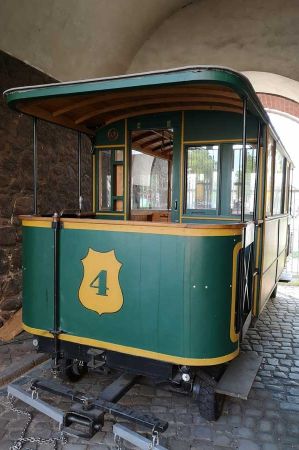 In the 12th century, the parish of St. Jacobi was founded. The construction of a Franciscan monastery at Mönchskirchhof began in 1230. In the 13th century the Stendaler Seefahrer Connection was formed, which operated trade with own ships in the Baltic and North Sea area. Incidentally, the oldest documentary mentioning of the merchant's church of St. Mary dates back to 1283.

In the 12th century, a Romanesque basilica was built on the site of today's St. Mary's Church, of which today still part of the equipment is preserved. In the late 14th century, the western building was extended with the double tower facade; the towers were extended later again. In 1420, the construction of the new St. Mary's Church began as a late Gothic hall church. On the south side a portal porch, called Paradise, was built. The Romanesque predecessor building was demolished a few years later. Until 1447 the church was vaulted.

In 1471 the high altar was erected. After the Reformation in 1538 it was Justus Jonas the Elder, who held the first Protestant sermon in the Margraviate of Brandenburg in the Marien Church. In the 16th century, the towers were completed. In 1580 an astronomical clock was installed. The Marien Church was the main parish church of the Hanseatic merchants. 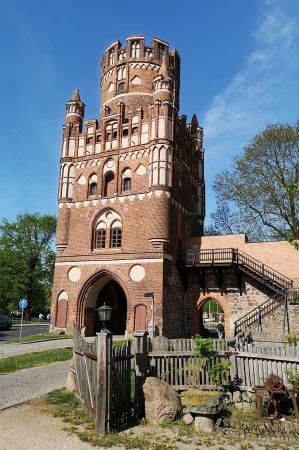 Around 1300 Stendal received city walls, at the same time also the Tangermünder gate was built. The field stone substructure is still preserved today as the foundation of a newer gate construction. In 1338, a Latin school was built in the Brüderstraße, from which a high school emerged later, whose famous student in the 18th century was the later archaeologist Johann Joachim Winckelmann. He attended high school from 1726 to 1736.

The Uenglinger Tor, next to the Tangermünde gate, is one of the still preserved city gates of Stendal. It was built in the late Middle Ages between 1450 and 1460. Originally Stendal had several gates and towers, some were demolished in the 18th century. The Uenglinger Tor is considered one of the most beautiful city gates in Northern Germany. Its magnificent 15th-century construction served as part of the north wall as the defense and representation of the rich medieval city. The tower opened the way to the west lying Uenglingen, hence its name. Since its restoration in 1989, the 27.5 m high tower has been accessible again in summer and offers a comprehensive view of Stendal through its battlements on its viewing platform.

The Uenglinger Gate was obviously the inspiration for the design of an industrial monument in the Ruhr region: The Lohnhalle of the Zeche Adolf von Hansemann mine in Mengede looks almost exactly the same, at least in the middle part of its façade, except that a wage hall cannot manage without a side wing. The water tower Lüneburg is obviously based on the architectural model of the Uenglinger Tor. 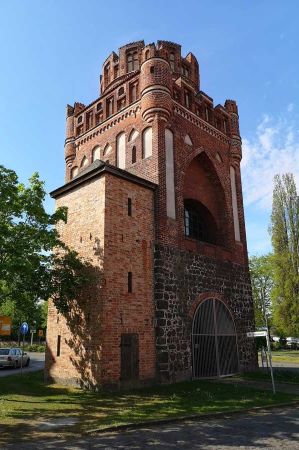 Stendal belonged demonstrably to the Hanseatic League from 1358 to 1518. In addition to Brandenburg on the Havel river Stendal was the oldest mint of the Mark Brandenburg. In the Margravate of Brandenburg several cities, including Stendal, paid a one-off compensation to the Margrave and received the right to mint coins for so-called Eternal Penny.

In front of the arbor is a sculpture of Rolandsfigur, made of stone. This figure is a copy from the year 1974 of the sculpture of 1525, which is kept in the Altmark Museum. The 7.80 m high figure is equipped with plate armor, a shield with the Brandenburg eagle and a shouldered sword. On the back, a fool figure with bagpipe and coat of arms is depicted on an ornamented column.

About 20 plots for Mobile Homes available

Roland - symbol of a city with market rights 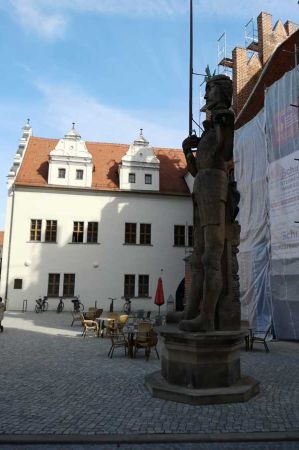 In the Middle Ages Roland sculptures were erected as a sign of civil liberty in many cities ("Rolandstadt"). The Roland figure was considered to be a symbol of the autonomy of a city with market rights and its own jurisdiction and thus freedom. Other reasons could also play a role. Thus, the Brandenburg Roland was also an expression of the economic prosperity of the city.

The figure of Roland, which became known through the song about Roland, had the status of a folk hero in the Middle Ages. The fame goes back to the fate of Hruotland, who was under control of Charles the Great, Earl of the Breton Mark. Roland fell in a rearguard action against the Waskonen (Basques under the rule of the Earl "Lupus") in the Pyrenees in the valley of Roncesvalles on 15 August 778. This is written in Einhards Karlsbiographie, the Vita Caroli Magni, briefly reported in two lines. This resulted in the song about Roland.

Later, Roland also served as an antidote to ecclesiastical rule. The oldest figures of Roland, especially in southern Europe, however, had a strong Christian connection. Rolande mainly stood where Saxon law applied.