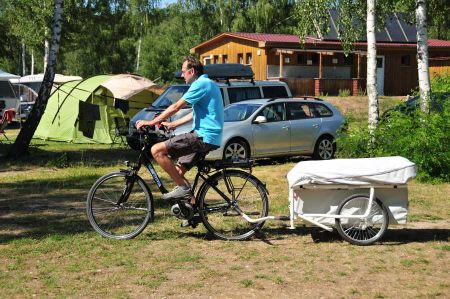 With great excitement and interest in the meeting with the blogger and image filmmaker Stefan and, of course, with the entire camera crew, who was on location for filming on behalf of the ARD, we drove to Bergwitzsee in Saxony-Anhalt.

Of course, the lake itself, the campsite and the surrounding area should not be neglected. At least one flying visit to the nearby Lutherstadt Wittenberg was firmly planned in our schedule. 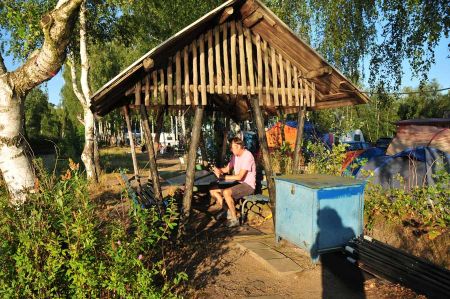 Let's start with a short introduction by Stefan, the initiator of our trip to the previously unknown destination near Leipzig, who arrived in the afternoon, shortly after the first contact with the shooting team at Bergwitzsee. Stefan is a trained filmmaker, he produces image films, product films and also produces TV reports on the following topics: car, sports, travel and leisure. Previous clients were WDR, SWR, Eurosport, SKY, DSF and n-tv. After some activities for the manufacturer Hymer, AL-KO and La Strada Stefan has also discovered the field of camping for himself and now produces short films as a blogger and a test subject at the same time, which are set on Youtube. This is how a separate channel was created, which Stefan dubbed "moving pictures".

Crazy for camping - a production team from Frankfurt is shooting 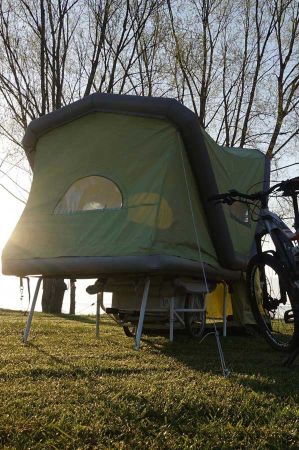 The camera team of a production company in Frankfurt shoots film sequences for a new TV series, which will be shown this autumn with the motto "Crazy for Camping" on German television. A total of 30 units of this series are planned to show the different camper lives and campers personally, their quirks and lifestyles. Having become campers for some time now too, the camera crews use several campsites to get to know campers who do much more than just camping.

And such a person is Stefan too, who as a blogger of camping both presents campsites and tests products and showing it in his movies. In this case, it is the BTurtl, also called mini-caravan, which we were allowed to explain to him in structure and function, so Stefan could then gain initial experience and degradation experience, of course, he should also in practice with a bicycle and the Mini Caravan on the road, which in the wonderful surroundings of the Bergwitzsee really means a special treat. Of course, Stefan should also spend the two nights in BTurtl, how else can you test how pleasant the indoor climate in the tent can be.

So the really exciting part of the filming was that Stefan was shooting a new Youtube movie as part of his concept moving pictures, while being filmed by the camera crew of the television production: quasi two scripts and two filmmakers in one set. In addition, countless campers, who now accustomed to the presence of the camera crew, very close and interested participated in the shooting, even questions of children were answered in details.

So the camera crew used the campgrounds area for sequences on Stefan and his bike with BTurtl trailer in always different surroundings, while Stefan himself also worked on his film. Apart from the professional equipment of the camera crew, action cameras and quadrocopters were used too.

Blogger intends to drive to the Bergwitzsee in Saxony-Anhalt
The Mosel - a paradise for campers, bikers and hikers