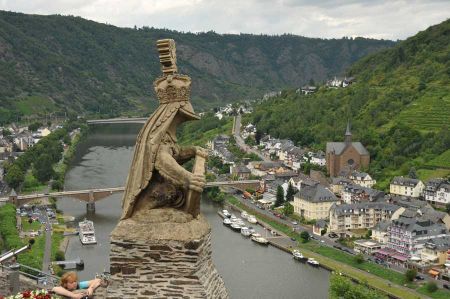 Once again we passed into Cochem on the Mosel river, after a short stopover at the Nordschleife of Nürburgring, where we first rested a little while enjoying a delicious ice cream in one of the many waterfront cafes.

From a parking spot on the way we had already used the view onto the castle of Cochem, despite the slightly cloudy weather, which we had not noticed during our tours so far. About the castle itself, in particular with reference to the drinking behavior of the medieval inhabitants, which manifested itself even in special door locks, we had already written an article about. Now some information about the Mosel itself will follow, which was already densely populated and used in Roman times. With Trier an important Roman center over the Mosel was also connected with Koblenz and Cologne. 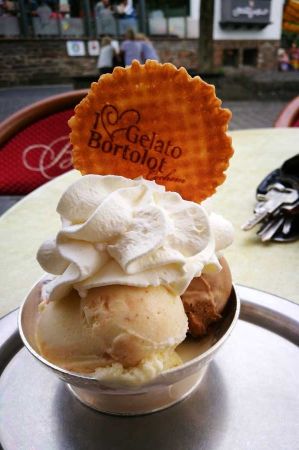 For the first time the Romans mentioned the Mosel in book 13 of the annals and in book 4 of the histories of Tacitus. The Roman poet Decimius Magnus Ausonius set in the 4th century already a literary monument about the Mosel. In his 371 resulting poem Mosella, written in 483 hexameters, the late-antique poet and teacher at Trierer Kaiserhof describes a trip from Bingen on the Hunsrück to the Mosel and their course following to Trier (Ausoniusstraße). Ausonius describes flowering and rich landscapes on the river and in the valley of the Mosel, which they owe not least to the policy of the late antique rulers. Incidentally, the name Mosel derives from the Celtic name Mosea through the Latin Mosella, a diminutive of Mosa, the Latin name of the initially parallel flowing Meuse to the Moselle.

Today, the Mosel Wine Route and the Mosel Cycle Route run through the Mosel Valley, with the cycle path from Metz in France to Trier continuing to Koblenz at Rhine river being 311 kilometers. Between Koblenz and Trier, large parts are led away from car noise and exhaust fumes on the route of the former Mosel Valley Railway. Every year on the Sunday after Pentecost, this is possible on the 140 kilometers between Schweich and Cochem also car-free as part of the Happy Mosel Day.

Mosel High Route - on left and right of river bed 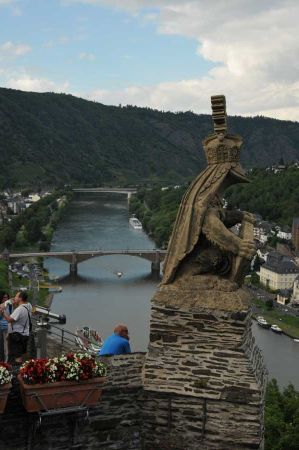 A number of remarkable castles and ruins adorn the heights above the Mosel valley, a sightseeing tour by boat is worthwhile. Since 1910, the Moselhöhenweg has been running along the Mosel, a hiking trail that is 185 km long on the Eifel side and 262 km long on the Hunsrück side. A special hike leads from Ediger-Eller via the Calmont via ferrata to Bremm through the steepest vineyard in Europe.

The Moselle was a popular migratory river for canoe before the construction of the barrages, so many barrages have boat lanes. The river is still used by many canoeists today, especially during the weekly summer lock-ups - then without commercial shipping.

In April 2014, the Moselsteig was opened, which leads to a total of 365 kilometers from Perl on the Upper Mosel to Koblenz. Numerous partner routes, the so-called side jumps and dream paths, complete the hiking offer in the Mosel valley.