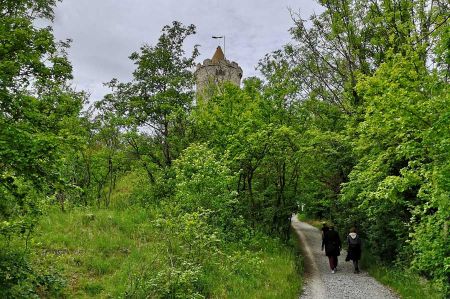 Visit from our friend Philipp and his girlfriend Jule, with whom we had undertaken countless hikes and discovery excursions during the project work on the Balkans and here especially in Greece.

It was for sure that we would also spend most of our time hiking and exploring in the Bad Kösen region. We told the two about the salt works in Bad Kösen, the hike to Rudelsburg Castle and the wonderful view of the Saale valley. Since there is another castle ruin not far from the Rudelsburg, this Saaleck castle should be the goal of our hike today.

Saaleck Castle on a limestone ridge 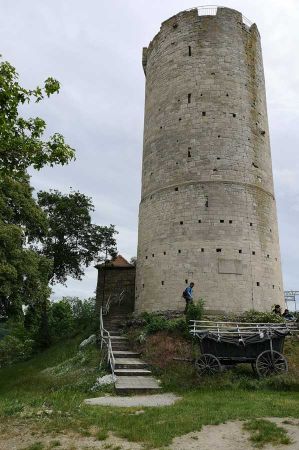 As already mentioned, Saaleck Castle is just a few hundred meters away from the Rudelsburg, a little further upstream of the Saale above the village of Saaleck in the Burgenland district in Saxony-Anhalt. Unfortunately, the hilltop castle has only survived as a ruin, but it is very popular as an excursion destination. Saaleck Castle is also on the Romanesque Road.

The castle is located on a roof-shaped, west-projecting shell limestone ridge immediately south of the village of Saaleck at about 172 m above sea level. The characteristic image of the castle is formed by the two towers, visible from afar, the wall thickness of which is around two meters and each almost 23 meters high. In the masonry of the climbable west tower there is a medieval toilet and a chimney, which mark the habitable floor. The stairs and the observation deck were installed at the beginning of the 20th century. The original spire was not renewed in order to create more space for visitors on the platform. The east tower used to serve as a defence tower and was uninhabited. 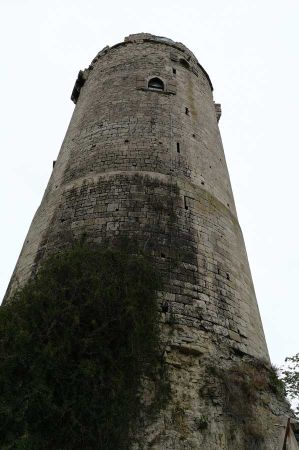 The towers and parts of the outer perimeter wall probably date from the late 12th century. This is particularly evident in the west tower, which can be dated to this time due to the careful stone processing and furnishing with chimney and toilet. The core of the east tower is also still Romanesque but was rebuilt from around the top of the former ring walls in Gothic times or at least its outer skin was renewed. The extensive outdoor facilities, of which only small traces of the wall can still be seen, which also encompassed the village of Saaleck with wall and ditch, have hardly been researched so far.

The core castle was once enclosed by an inner and outer defensive wall. The remains of several residential buildings have been preserved on the inner wall. On the two narrow sides of the surrounding terrace, a trench with a wall was created. On the east side of the mountain spur facing the Rudelsburg, further trenches with ramparts are in front.

Builders and beneficiaries of Saaleck Castle 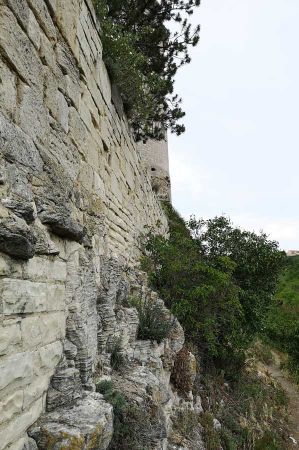 The builders of the castle, which was built at the beginning of the 12th century, were probably the margraves of Meißen, who had built Saaleck Castle as a counter-foundation to the neighbouring episcopal Rudelsburg. In the year 1140, Hermannus advocatus de Salek, the noble free von Saaleck is mentioned for the first time, who appear in the wake of the Naumburg bishop as well as the landgrave of Thuringia and the margrave of Meissen. Around 1220 the castle came to the Vargula taverns. In the memory of posterity, Rudolf II, Landgrave Schenk and Herr von Saaleck are particularly well-known because they served at Hermann I's court and Ludwig IV followed as a crusader to Otranto. In 1344 the Saaleck taverns sold the castle and their property to the Naumburg bishops, who formed the Saaleck office belonging to the Naumburg monastery from the area. Rudolf Schenk von Saaleck-Nebra was bishop (1352-1362) of Naumburg. In 1396 the Bishop of Naumburg pledged the castle back to the inns of Saaleck. In 1523 the main castle of Saaleck was given up and the official business was done from the outer castle. Saaleck castle and office came to the Naumburg office in 1544. After the transition from Saaleck Castle and Office with the Vorwerk Stendorf to the Albertine Elector August I of Saxony as administrator in 1564, Saaleck Castle was the residence of an official until 1585. After he moved into the Vorwerk Stendorf, which belonged to the castle, this was raised to a knighthood, while the ownerless castle fell into disrepair. Until around 1800 it served as a quarry for the farmers of the surrounding villages.

Lush, almost Mediterranean flora on the south side 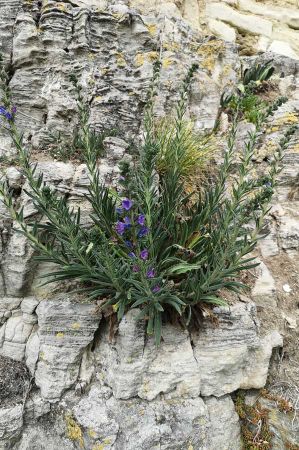 The walk around the castle is also interesting, just the different plants on the south side of the castle ruins, you could almost feel transported to Tuscany. Of course, the warmth due to the constant sunshine and reflection through the castle walls and of course the shell limestone floor play a decisive role. The vegetation always appeared unexpected but have a check by yourself.

Some picnic areas invite you to linger and so we weren't the first guests that day either. A little later there was another highlight, but more on that later. Have fun on your hike to Saaleck Castle.