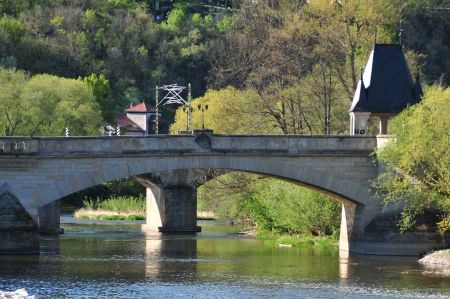 Located just a few kilometers below the well-known Rudelsburg, the historically valuable Saale bridge connects the older part of Bad Kösen on the right of the Saale with the newer part on the left bank of the river and has long been an important Saale crossing in the course of the medieval Via Regia, the course of which in big parts is the modern federal highway 87.

Bad Kösen - an important landing point for the timber trade 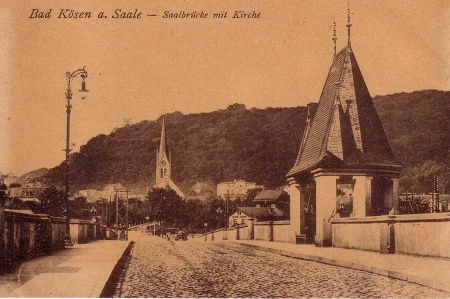 For centuries until well into the 19th century, Bad Kösen was the most important landing point for logs from rafting on the Saale. The rafting and drift (from "drift" in the sense of "let drift") meant the transport of floating tree trunks, split logs or sawn timber on waterways, as was common in Germany up to the beginning of the 20th century and regionally even until the end the 50s. Just a few transport options such as trucks and / or rail were the reasons for the water transport, which was operated until the 20th century. When the wood is tied together, it is called rafting, otherwise the transport in water is called drifting. 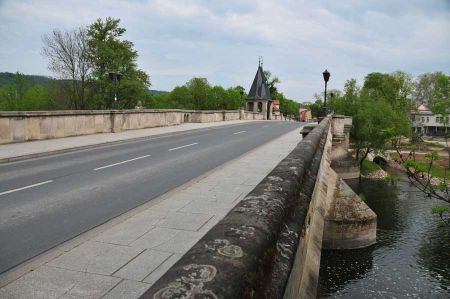 The raftsmen tied tree trunks together to form so-called sturgeons and in this way transported large quantities of wood. Salts were washed out of the wood so that it was less discarded when it was dried later. The drive through the weirs in the course of the river was dangerous, however, the height differences between individual logs were sometimes more than a meter, and the raftsman got deep into the water. Eddies and shallows often formed behind the weirs. Helpers were also available there to provide help in an emergency.

This meant that Bad Kösen was also the customs post at which the rafting duty was levied until the middle of the 19th century. 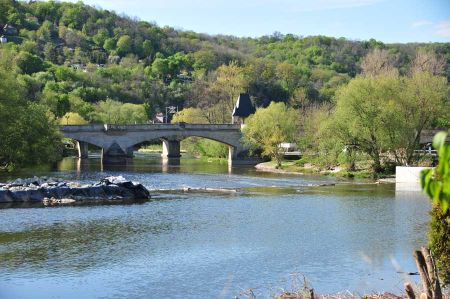 The first wooden bridge is said to have stood here even before the Pforta Monastery was founded, it was first mentioned around 1298 and destroyed in a feud between the Naumburg citizens and the Count of Mansfeld in 1393, but was rebuilt a little later. About 1454 a stone bridge with a length of 288 feet on three round and five pointed arches is mentioned. At the end of November 1890, during the worst flooding of the Saale in the previous 500 years, it was pushed in by dammed up driftwood from the rafting of the Saale and then completely removed. After dam breaks in the upper reaches of the Saale, the flood reached well more than 3 meters above normal.

“After heavy rain on the upper reaches of the Saale, a flood occurred at the end of November 1890 as a result of which around 4,000 tree trunks (rafting) built up in front of the Saale bridge and caused it to collapse. With great effort, the railway bridge managed to save it from the same fate. As a result, a ship bridge was built first and an emergency bridge from December 22nd. Almost two years later (November 23, 1892) the foundation stone was laid for the new Saale crossing, which was inaugurated on November 24, 1893. A bridge toll had to be paid for the use of the bridge (abolished on October 1st, 1932). On May 1st, 1900 the bridge was named "Bridge of Unity". 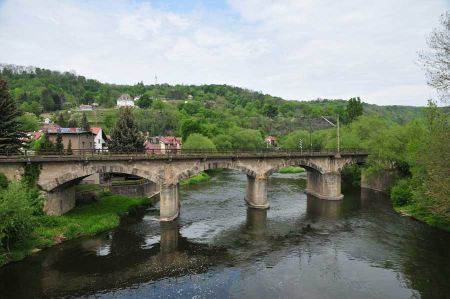 A temporary pontoon bridge temporarily secured the crossing. From 1892 the new construction of today's stone bridge over the Saale was built as an arched bridge with its characteristic turrets on the bridge piers. It was inaugurated on November 24th of 1893. The total length of the bridge is 137 m with the arches of 24.5 m each in the bank area and twice 27.0 m in the middle of the river.

The rafting on the Saale was finally stopped around 1910. The floods of 1890 meant that numerous dams were built on the upper reaches of the Saale over the next few decades.

Karl Kathe or Paul Hein? Or both? 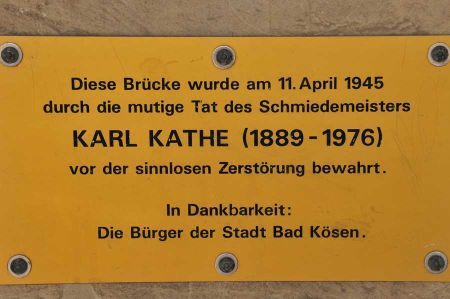 At the beginning of April 1945 (April 10th) the Bad Kösener Saale bridge was prepared for demolition in order to stop the advance of the advancing Americans. The demolition of the bridge was prevented (April 10th), although it is still a matter of dispute who is responsible for this (master blacksmith Karl Kathe or Mr. Hein). On April 11, 1945, the American troops reached the city of Bad Kösen and occupied it. On June 30th, the American troops were replaced by the Red Army.

Karl Kathe or Paul Hein? Or both? In the spa town, an old topic receives new attention again and again - triggered by a "cemented" factual assertion: the master blacksmith Karl Kathe is the saviour of today's "bridge of unity". He cut the main cable to the explosive charge with combination pliers. A plaque inaugurated on the bridge in September 2005 honours this - and has been the stumbling block for the descendants of Paul Hein ever since. They refer to the father's notes, including those published in 1969 by the GDR military publishing house.