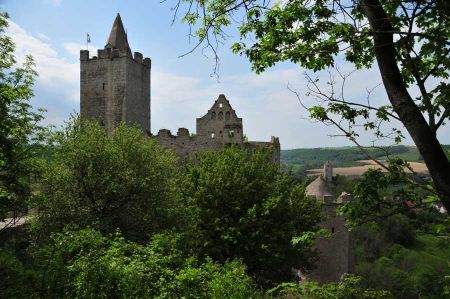 In our blog article "Ghost beech in Bad Kösen" we had already described a section of the hiking trail network that ultimately leads to the Rudelsburg, partly through wonderful shady deciduous forest and partly within sight of the Saale river.

The Rudelsburg itself is a castle high above the Saale river, which lies about 85 meters above the south bank of the Saale on a rocky ridge made of shell limestone. Today, large parts have been destroyed by wars and fire, but the preserved inner castle offers a wonderful beer garden with hospitality, so that the hiking trail and castle complex are heavily frequented.

Small history about the Rudelsburg above the Saale river 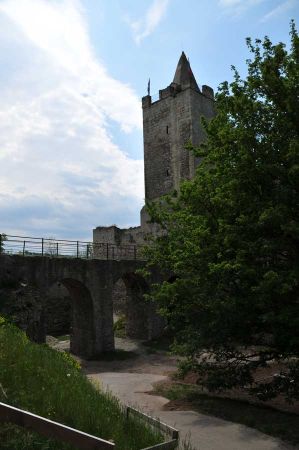 The Rudelsburg was probably built by the bishops of Naumburg in the High Middle Ages to secure trade routes such as the Via Regia with the Saale bridge in Bad Kösen. When it was first mentioned in 1171, it was owned by Naumburg ministerial. In 1238 it was lent to the margraves of Meißen and officially approved as a fortification. The castle was in the area of ​​tension between the interests of the Naumburg bishops and the margraves of Meißen from the house of Wettin. In 1348, the outer bailey was destroyed by the city of Naumburg.

At times the castle served as residence for various noble families until it was almost completely destroyed in the Thirty Years' War and then fell into disrepair. As the "most beautiful of all Saalburg castles", the ruin of Rudelsburg was discovered early in the 19th century in the course of castle romanticism and hiking tourism as a destination. As an annual meeting point for the Kösener Corps students, the Rudelsburg achieved national fame from 1855. It is still a popular excursion destination today, as it lies on the southern route of the Romanesque Road. 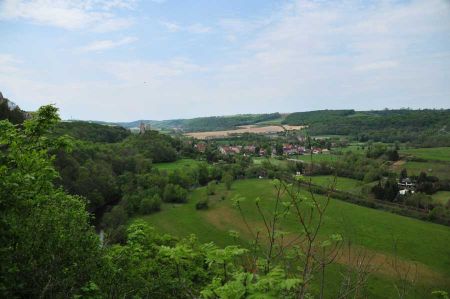 On April 22, 1348, Naumburg citizens went to the Rudelsburg and attacked the castle at the decision of the city of Naumburg. The reason for this was the constant raids on merchants along the trade route that led to Naumburg. The attack with burning pitch arrows and powder guns - "instrumentum for Greek fire" - and the siege of Rudelsburg lasted three months. During this time there was damage to the Rudelsburg, especially the outer bailey. Thus, in July 1348, under the leadership of Naumburg Mayor Tyzce von Mercewitz and Hencze Eldeste, the Naumburg citizens stormed the outer bailey and burned. 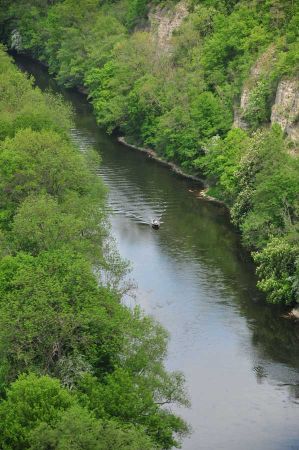 During the Saxon Brother War of 1450 there was a siege of the Rudelsburg again, which was first besieged and then significantly damaged in the fighting.

After the castle was again in the possession of the margraves of Meißen in 1485, it was sold to Hans Georg von Osterhausen in 1581, who left the Rudelsburg in the following years.

Towards the end of the Thirty Years' War in 1641, the Rudelsburg was attacked and robbed by the Swedes and set on fire.

In the period that followed, the Rudelsburg remained uninhabited and fell into disrepair. At the same time, the remains were used as a quarry and thus largely removed, so that today only the core castle of the original Rudelsburg remains.

In 1795 the castle ruins and Kreipitzsch became the property of those from Schönburg. Due to the increasing tourism, Gottlieb Wagner began to offer catering in Rudelsburg in 1827 (other information talk about 1824).

While resting on the Rudelsburg, the Berlin student Franz Kugler wrote the text for the well-known song "An der Saale hellem Strande" in 1826.

If the ascent to the castle is not enough, you can continue to the castle ruins of Saaleck Castle, but that's another story. Enjoy your hike to Rudelsburg.