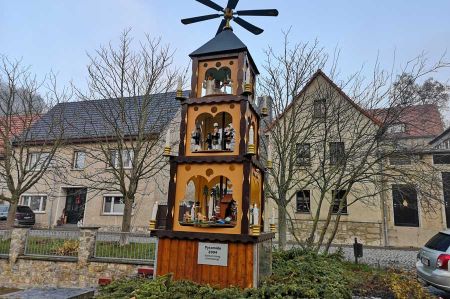 And now they shine and turn again, the often-handcrafted wooden light roundabouts, which are meant to warm hearts outdoors or at home as pre-Christmas decorations.

Yes, we are talking about the Christmas pyramids, which mainly origin from the Ore Mountains, are now considered a component of folk art and are widespread in cities and private households. We were in the neighbouring village of Eckartsberga, where we came across the Christmas pyramid shown in the pictures.

To the origin of the Christmas pyramid 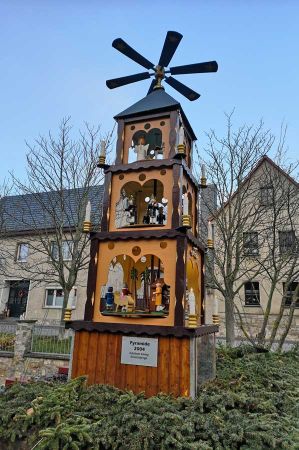 The Christmas pyramid combines the two customs of the rotating tree with its evergreen branches with the (candle) light to avert disaster and became a symbol of the approaching Christmas, especially in the Ore Mountains. The light frames known in Germany in the 18th century were the origin of today's pyramids. They consisted of four rods wound with green branches, tied together at the top and provided with lights. In many village churches in the Mark Brandenburg region, there used to be slatted frames tapering towards the top for Christmas mass, which were decorated with burning candles and hung with glittering objects. Decorating these pyramids and lighting the candlelight was one of the main tasks of the candlestick building societies established at the time.

Until the middle of the 19th century, the Berlin Christmas pyramid "Perjamide" was the highlight of the Christmas presents in Berlin. These mostly simple pyramid-shaped wire and wooden frames, wrapped in fir green, were decorated, served as light carriers and were sold at Christmas markets or made by locals themselves. At the end of the 18th century these pyramids were used in many pictorial representations and in the 19th century were considered the “trademark” of the Berlin Christmas market.

The term pyramid for a light-bearing Christmas decoration (better known in the Erzgebirge under the term Peremett), which was set up in the church, is said to have been used for the first time in 1716 in the Schneeberg city and mountain chronicle. Looking back on the time before the renovation of St. Wolfgang's Church, it says that the visitors to the Christmas mass on Christmas Day brought burning candles into the church and that “the vain youth who loved illumination ... built pyramids of lots of lights” . These pyramids seem to be a collection of numerous burning candles in the form of a pyramid, not the Christmas pyramids in the modern sense.

The carousel-like frames are made with Christian motifs (such as angel figures and the birth of Christ) as well as secular motifs (e.g. miners and forest motifs) and are traditionally driven by the candles with the help of the rising warmth that turns the impeller and the plate connected to it via a rod to motion. 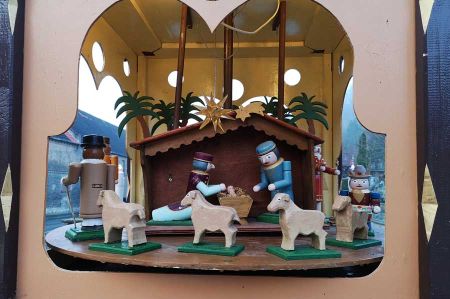 Miners in the Ore Mountains did not interpret the basic shape as a simple tree with lights but were reminded of the shape of a horse peg. A horse peg is attached to a foundation called a peg stock. The foundation consists of a round or octagonal foundation wall on which octagonal sleepers are placed. This foundation is levelled so that the top of the sleeper is about a foot above the ground. In the foundation there is a recess, the so-called pan, in which the lower pin of the main shaft rotates freely. This pan is made of steel, it is also called a journal bearing. To reduce friction losses, the journal bearing is always well lubricated and cleaned if necessary. The main rafters are erected and attached to the corners of the foundation planks. The main rafters are set into a short cylindrical post at the top. This post forms the head of the building. Based on this farmer's technique, the people of the Erzgebirge began to fill the empty stick frame with platforms and on top with hand-made wooden figures, thus developing the basic principle of the Christmas pyramid.

When the cheap paraffin was discovered around 1830, which replaced the expensive tallow candles or Rüböl lamps with which the pyramids had been driven until then, the Ore Mountains pyramid experienced an upswing. A variety of motifs and styles emerged, such as B. Gothic and oriental styles and the forest motif. Figures from numerous subject areas were placed on the plates, including the birth of Christ, mountain parades and forest animals.

Great pyramids in the Ore Mountains 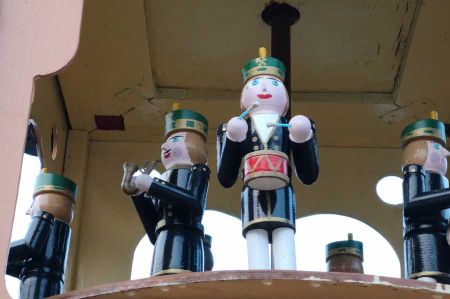 Until the 1930s, Christmas pyramids remained exclusively domestic Christmas decorations, which often had a special place in living rooms. According to tradition, the last retired Frohnauer Steiger Traugott Pollmer had the idea in 1926 to set up a "pyramid for everyone" outdoors. In 1931, three years after Pollmer's death, work began on the Ore Mountains' first free-range pyramid under the direction of the Frohnau carving association near Annaberg-Buchholz and in collaboration with local craftsmen, the local council and the carver Paul Schneider. After its completion, the Frohnau pyramid was inaugurated on December 17, 1933. The pyramid was dismantled just two years after its inauguration; nothing is known about its whereabouts. The oldest preserved and still operated outdoor pyramid is the so-called Krauss pyramid in Schwarzenberg.

Up until the 1950s there were 10 pyramids in the Ore Mountains, they were still the exception. The increased spread began in the 1960s and 1970s. After the fall of the Wall, a real boom began in 1990 - almost every place in the West and East Ore Mountains built a place pyramid, the inauguration of which was then celebrated with a festive celebration. This Christmas custom has been spreading ever since the fall of the Wall. The number of local pyramids in the Erzgebirgskreis was 150 at the end of 2014. There are also many systems in the Eastern Ore Mountains. Some of these large pyramids are erected all year round.

In 2014 the world's largest Christmas pyramid to date was erected in Johanngeorgenstadt.