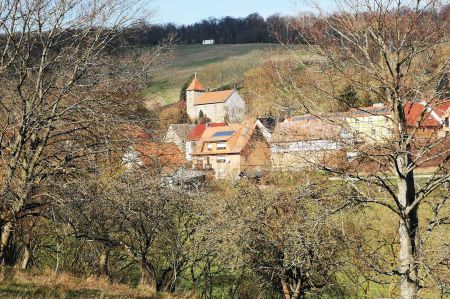 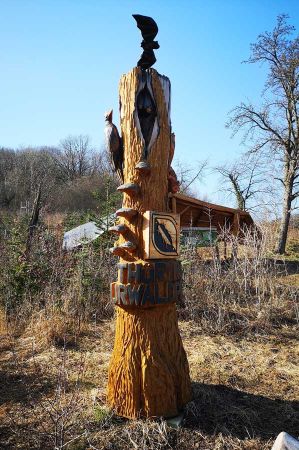 Hohe Schrecke once belonged to the core area of the Thuringian Kingdom and had mighty ramparts and fortifications in the peripheral areas, such as the Monraburg or the Rabenswalde Castle. In the High Middle Ages, the area belonged to the sphere of influence of the Counts of Beichling, the Counts of Wiehe and the Thuringian Landgraves of Raspenburg. The trade routes that ran through the area were controlled by other castles, including the aforementioned Rabenswalde Castle. The economic development and the development of the country too also led to the establishment of settlements and villages in the interior of the mountains, as the Wetzelshain desert testifies to. Until the expropriation without compensation in 1945, the main part of the forest with 4,900 hectares belonged to the family of "von Werthern-Beichlingen".

Military had spread out on the Hohe Schrecke 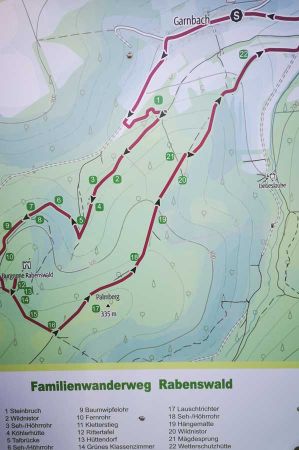 In the 1930s, an ammunition plant for the German Air Force was built in the eastern part of the Hohe Schrecke, east of Lossa. Above-ground bunkers with an embankment were used to store the ammunition. These were blown up by the Red Army in 1945, and the ammunition stocks were disposed of mainly in former potash pits.

Between 1946 and 1948 the Soviet occupying forces cleared around 2,000 of the 4,900 hectares of forest for a military training area, surrounded by a restricted military area. Sometimes the forest was allowed to grow back again. At the beginning of the 1990s, the Soviet troops withdrew from their base near Lossa. LEG Thuringia received the order to clean the area of ammunition and to close rocket shafts and bunkers. In 2010, 3,000 hectares were still not safely cleared. After that, the forest should be sold. Around 2005 the decision was made for the large-scale nature conservation project “Hohe Schrecke - Old Forest with a Future”.

Old forest in the northeast of the Hohe Schrecke 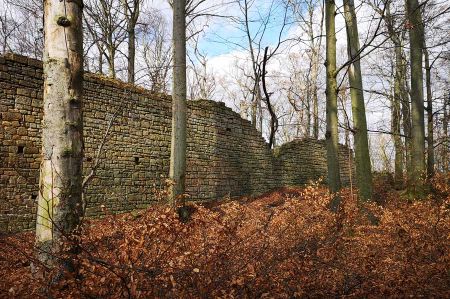 The landscape on the Hohe Schrecke is characterized by large, closed and uncut deciduous forests, especially beech forests. Due to its closeness, Hohe Schrecke offers a habitat for wild cats, black storks and red deer. More than 500 different types of large mushrooms also grow here. To the northwest, north and northeast, the Hohe Schrecke flows around the Saale tributary Unstrut, which is very popular with paddlers.

Even older castle complex on the Hohe Schrecke 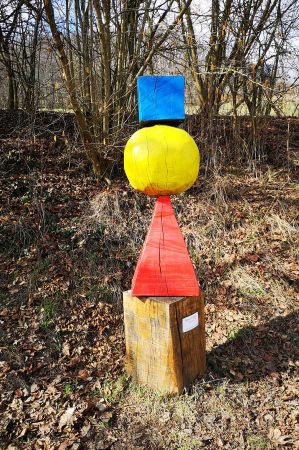 Even older than the beech forest is the Rabenswalde castle site on the Schrecke, which is located on a 310 meter high mountain spur to the Unstrut valley 1.5 km southwest of Garnbach. Remnants of the castle are still there.

Around 1233–1237, the Counts of Wiehe, from the family of the Counts of Kevernburg, had built a new castle in the woods called Rabenswalde. It consisted of a bailey and a main castle, which were secured with a rampart. The castle served as the residence of the noble family, now called Counts von Rabenswalde-Wiehe, and as the seat of power for the county of Rabenswalde of the same name.

As a result of the Thuringian Count War (1342-1346), Rabenswalde Castle was destroyed around 1350 and razed to the ground. From the former two-part castle complex, only remnants of the 40-meter-long and 1.5-meter-thick defensive wall and moat have survived.

Today, a wonderful family trail has been set up on the Hohe Schrecke, which attracts guests from the surrounding area and increasingly also hiking tourists. Round trip refreshments are possible in the village of Garnbach as soon as the pandemic has been overcome. Here people are family-friendly and the cultural / historical botanical highlights are also remarkable.