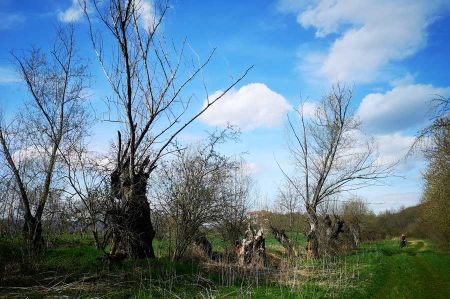 Every hike, at least if you walk through nature with your eyes open, always brings new perspectives or even new insights, which you have already encountered many times, but little or not at all explored.

This also happened with regard to so-called pollarded willows during our last hike, which should lead us from Memleben along the Unstrut river to Wendelstein Castle. We have often come across these trimmed trees, although we had thought about the deeper meaning and also discussed some approaches with biologists, which had led to different justifications in their theories. 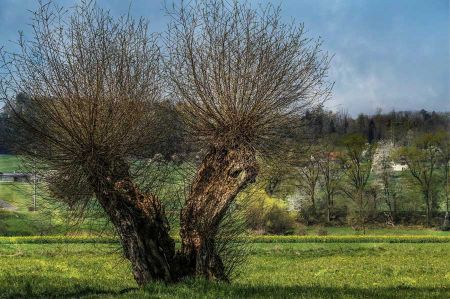 Pollard willows are willows whose trunk was shortened as a young tree to a height of about 1 to 3 meters and whose branches are subsequently regularly pruned, which is popularly referred to as „schneitelung“ (there is no English äquivalent). Other tree species such as ash, poplar or linden are also cut so that head trees develop from them. In the willows, the silver willow (Salix alba) or the basket willow (Salix viminalis) are mostly used. 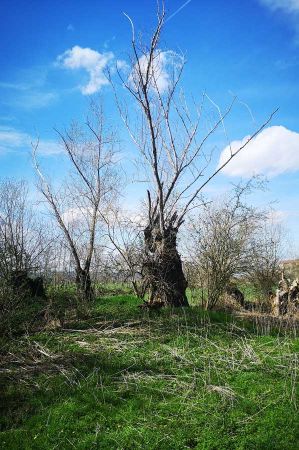 We have often thought about the meaning and purpose of trees treated in this way, and asked experts for advice, which then turned out to be quite different. Sure, the tree that has been treated in this way will sprout large numbers of new shoots at the cut surface. These “rods” or branches can be easily reached and cut off (snowed) for economic use, for example to weave baskets out of the “twigs” in the willow tree. Over time, the top section of the trunk thickens; the repeated head cut creates the head of the willow. Once a willow has been cut into a pollarded willow, it must be tended regularly. A cut is necessary every three to ten years, this period depends on the desired use, rods for braiding are cut at short intervals, for use as posts or stems there is a longer waiting period. Even an interval longer by a few years (15 to 20 years) and the tree, with its statics changed by large branches, can partially break apart under their load. This effect explains the large number of bizarre, damaged pollarded willows, whose vitality can compensate for such great damage for a long time to come.

Use as living boundaries and fences 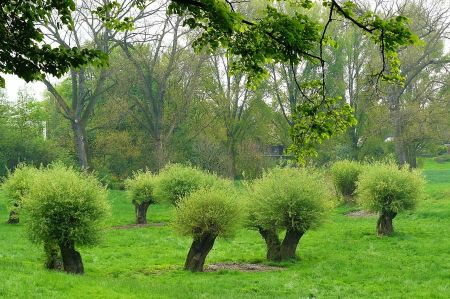 Since branches of willow trees were often used as stakes for erecting pasture fences, the enormous regenerative capacity of willow trees often gave rise to new plants. For this reason, pollarded willows are often lined up. A modern form of pasture use is living shoring, in which living twigs are used to create boundaries. The possibilities of use range from the fastening of slopes by rooting the branches to considerable buildings made of living wood (such as a willow dome). Both live and dried rods can be used as a fascine. On the one hand, dead material provides a high resilience, but the sprouting, living rods with their roots secure the earth masses much more effectively. However, the resulting willow field is not desired everywhere.

Use even in house construction 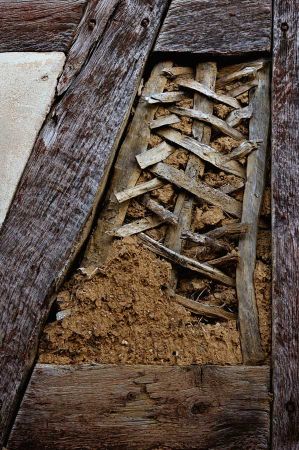 The thinner rods obtained were used in earlier times, as already mentioned, for basket weaving (basket willow) or in connection with clay as a building material for weaving house walls. Older or overgrown branches were used to make broom and tool handles.

Today there is hardly any economic use of pastures, as industrial substitute products have established themselves; accordingly, pollarded willows are rarely cared for today. If care is still carried out nowadays, it is mostly done by nature conservation organizations that are committed to preserving the pollarded willows as a habitat for numerous animal species, especially the bats and owls, which are threatened in their population. These animals find shelter and nesting opportunities in the often hollow trunks. Both the male and the female pastures with their kittens provide the bees with their first food in spring. That is why, as a rule, not all pastures of a stand are cut in one year, but only individual ones alternately.

Pollard willows are characteristic for the appearance of the Lower Rhine region but also other regions, such as B. Western Pomerania or Mecklenburg.