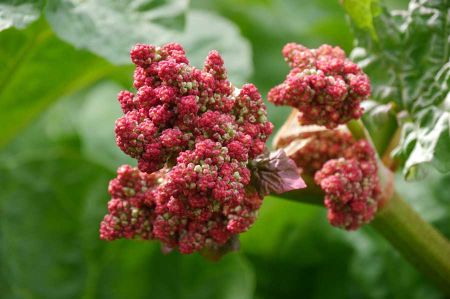 The tour around the weekly market, which is still limited, shows, despite Corona, that there are also some imports possible every year despite many bottlenecks, including rhubarb, whose time is just beginning for us.

The anticipation for a piece of rhubarb cake with a piping began as soon as we went shopping, hmmm simply delicious, if there is still some whipped cream available.

Cultivation and use of rhubarb

In our regions, rhubarb is often grown in greenhouses or even in buildings, as the optimal temperature conditions for growth are between 12 and 16 ° C and 85–90% relative humidity. Temperatures that we usually reach on average in May. The base shoots are driven into loose soil for this purpose. The expulsion in the light leads to the red coloration of the stems, which is preferred by many consumers and which is so popular with us. Different countries, different customs and traditions, in England the rhubarb shoots are traditionally driven under special clay pots.

Rhubarb is grown outdoors with or without a foil cover. Planted outdoors, the first harvest takes place in the second year after planting. The culture usually lasts five to six years. Rhubarb is just harvested until around the end of May, and then until the end of July in the following years. Manual harvest for the fresh market often takes place every eight to 14 days, harvest for industrial processing often only twice per season. The young inflorescences are broken off when the leaves are harvested in order to increase the yield.

If you want to grow rhubarb yourself, you should have medium-heavy, deep and well water-retaining soils with a pH value between 5.6 and 7.2. The climatic requirements of the rhubarb are quite modest because it only needs a lot of water. The areas for cultivation must be free of nemathodes and root weeds. It is advantageous to cultivate it after plowing a meadow. 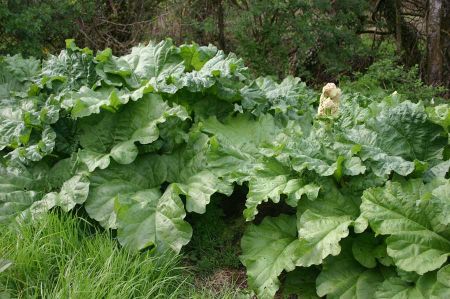 The leaf stalks are peeled and usually cut, depending on the variety and age of the stems. Because of its preparation, rhubarb is generally considered a fruit, although it is actually a vegetable. The best-known preparations are jams and compotes, as well as cakes in numerous variations. In addition, rhubarb is also processed into juice or must. Rhubarb is rarely used as a vegetable. Rhubarb is popular because of its refreshing, piquant-sour taste and low energy content.

The fruit acids contained are important for the taste, especially the malic and citric acids in connection with the sugar. Red pulp varieties contain fewer fruit acids than green pulp varieties. The “Ras Versteeg” variety contains around 1.5 g of malic and 0.1 g of citric acid per 100 g of fresh edible substance. The stems contain an average of 460 mg oxalic acid per 100 g fresh substance. This high content has a calcium-consuming effect on humans. People with kidney and gall bladder disease as well as children should be careful when consuming rhubarb because of that.

Origin of the rhubarb 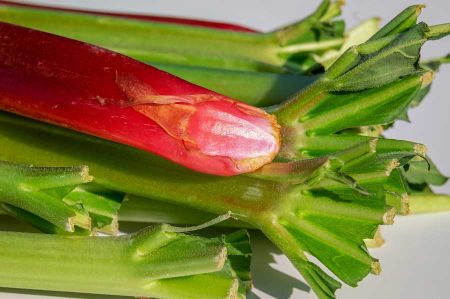 Rhubarb is native to the Himalayas. Since the 11th century Rheum rhabarbarum L. has been imported from Central Asia or China via the Arabic medicine of the Middle Ages and the School of Salerno into the Western medicine of the Middle Ages, where not the stems, as today, but above all the underground shoots - especially Preparation of medicines - found use. It was grown extensively in Russia in the 16th century and found its way to other parts of Europe in the 18th century. It came to England via France and the Netherlands, where cultivation has been documented since 1753. The forcing was first run by gardeners in Chelsea and later perfected in Yorkshire. The first commercial cultivation in Germany took place in Hamburg-Kirchwerder in 1848 and spread from north to south.

A delicious recipe for rhubarb cake with piping will follow shortly.

Discover the Unstrut river and gain knowledge of wine
The red flowering of the quince - springtime appearing!