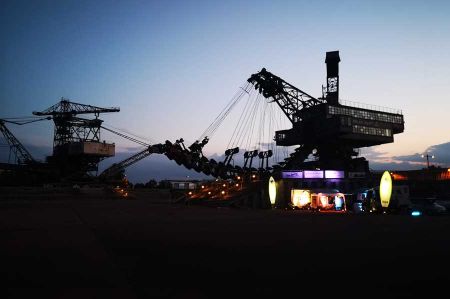 In a first blog we had already reported about the first Vanlife Festival in Ferropolis, so-called Eisenstadt in the former open-cast mining area in Golpa Nord near Leipzig.

A number of exhibitors had positioned themselves accordingly in the indoor area used for the audience at live concerts between the huge machines with their stands and exhibition products, hundreds of campers were distributed with their vehicles on the site. The huge excavators and machines are located around the spectator area, creating an unbelievable atmosphere, especially at dusk and at night, creating an unbelievable silhouette. Names for the large machines had long been given: In the open-air museum around the spectator area there is a bucket chain swing excavator (nickname "Mad Max") and a bucket wheel excavator ("Big Wheel") as well as two spreaders ("Gemini" and "Medusa") and a crawler-pillar swing excavator ("Mosquito"). The supply of the most necessary was ensured by various providers, so that the campers also had the feeling of free time and outdoors, especially since the beach area at the lake was very attractive.

Golpa-Nord opencast mine - transformation of the industrial site 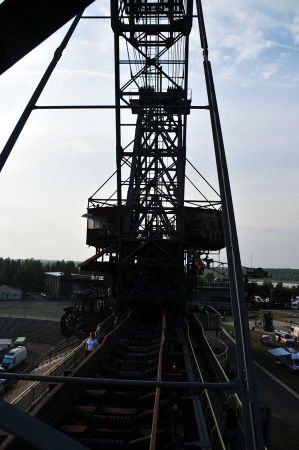 Originally the workshops, the energy supply and the social facilities of the Golpa-Nord opencast mine, part of the Bitterfeld mining area, were located here. Until 1955, a mine railway connected Bergwitz with the Zschornewitz power station. Parts of the abandoned railway embankment were later used as an access road for the Golpa-Nord open-cast lignite mine and later for the connection to Ferropolis. The mine railway and current siding for Ferropolis were built parallel to this former railway line.

After the shutdown of the opencast mine in 1991, based on a diploma thesis by the architect Martin Brück submitted to the Bauhaus Dessau Foundation in 1992, the idea of ​​merging and museum use of the large equipment remaining on the area on a residual pillar protruding into the opencast mine, today's peninsula, arose. In addition to the Bauhaus Foundation, the Expo-2000-Gesellschaft Sachsen Anhalt GmbH and the Lausitzer und Mitteldeutsche Bergbau-Verwaltungsgesellschaft were involved in the design of the area designated as a regional project for the Expo 2000. The official establishment of the "City of Iron" was completed on December 14, 1995 by the then Minister of Economics of Saxony-Anhalt, Klaus Schucht, unveiling the town sign. In July 2000 Ferropolis was opened to the public. The gala concert for the opening was conducted by the Greek composer Mikis Theodorakis; Gert Hof staged the accompanying light show. Bauhaus and Expo-Gesellschaft withdrew from the operating company Ferropolis GmbH at the end of 2001; The main shareholder is currently (2019) the city of Graefenhainichen.

Ferropolis - development into a cultural site 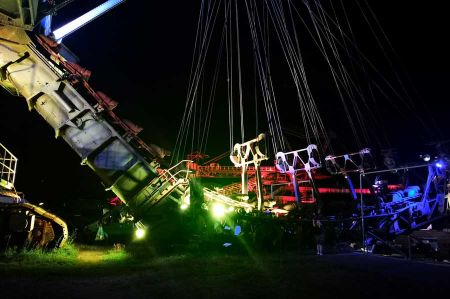 In 2004, extensive renovation measures were carried out on the large equipment. The connection to Ferropolis was renewed in 2005. In December 2005 Ferropolis was officially included in the European Route of Industrial Heritage. Ferropolis can also be reached with the museum trains of the former Zschornewitzer Kleinbahn. An industrial museum was set up in the former coal-fired power station in Zschornewitz as a testimony to coal-fired power generation.

On July 6, 2013, one of five parallel concerts was given in Ferropolis under the title Together against the flood - We say thank you by the radio station MDR Jump. The reason for this was the regional impact of the flood in Central Europe in 2013.

In the former power supply station, in addition to part of the original control room, there is an exhibition on regional mining history, which shows, for example, historical photographs from the excavated villages of Gremmin and Golpa, and a replica of the find situation of a 120,000-year-old forest elephant skeleton in the overburden of the neighboring Gröbern opencast mine.

In addition to its use as an open-air museum, music and sporting events as well as special events such as the “Bergmann Day” or the “Day of Industrial Culture” take place on the site. The Ferropolis Arena, which is surrounded by five large machines, has a capacity of 25,000 visitors. The unusual setting was and is appreciated by many artists. For example, Die Ärzte, Die Toten Hosen, Linkin Park, Metallica, Böhse Onkelz, Herbert Grönemeyer, Udo Lindenberg, Paul Kalkbrenner, Nena, Deep Purple, Alice Cooper and the Puhdys appeared here. The “City of Iron” is also used for festivals and classical music performances. Regular events include the Melt! as part of the Musikfeste Sachsen-Anhalt and splash !, the Pyrogames and, since 2017, the With Full Force and the WHOLE - United Queer Festival. 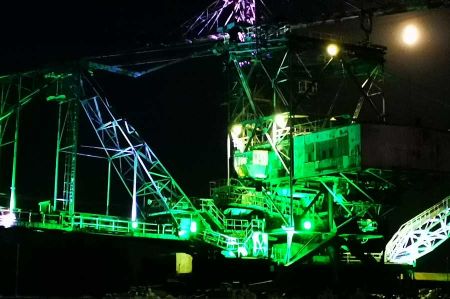 The Iron Drift King motorsport event has been held annually in Ferropolis since 2018; The Petrolettes women's motorcycle festival was held here for the first time in 2019. From 2014 to 2016, Ferropolis hosted the StrongmanRun series of obstacle races; The NeuseenMan triathlon has been taking place on the site since 2018.

Ferropolis open-air museum is located on the COAL | STEAM | LICHT cycle route. The route leads past various testimonies of industrial history and shows the development from a central German industrial area to a cultural and recreational landscape.