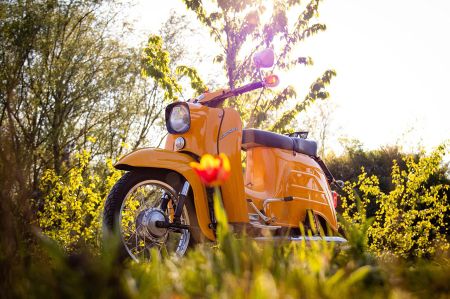 Sometimes it's the noises, disturbing but then so interesting and impressive that you inevitably look up in the direction of the "noise". This is what happened to us at the end of our bike tour from Memleben along the Unstrut back to Wiehe, where a small but fine ice cream café lured us.

The weather was temptingly sunny, we were able to visit the interior of the Memleben monastery for the first time and then drove on, fascinated.

Small scooter from Simson - a relic from the GDR 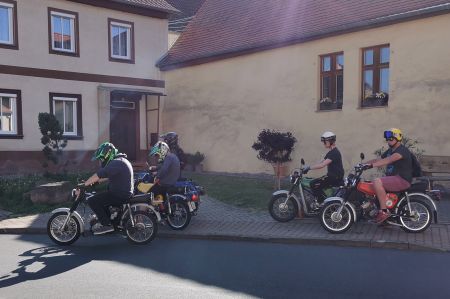 Of course, ice cream parlors are always a point of attraction and pleasure that is appreciated by many. So this time we met a group of Simson Schwalbe drivers at the said ice cream parlor, who had also made a stopover here. Anyone who hasn't experienced it live in the west of the republic, the so-called Swallow was the first model of the then new bird series from the two-wheeler manufacturer Simson in 1964. There were a total of three series with a total of nine Schwalbe models. In 1986 it was replaced by the newly designed SR 50 small scooter. With more than 1 million copies built, it was extremely widespread in the GDR and is still part of the street scene today, yes, there is actually a continuously growing fan community. The Schwalbe was not offered in West Germany, quite the opposite of the MZ motorcycle, which was even available from some department stores.

According to an exception, the Schwalbe can be driven in Germany as a moped with an insurance license plate without registration (driver's license category AM) despite the maximum speed of 60 km/h and therefore does not require a TÜV. In 1958, when the Simson KR 50 appeared, work began on a two-seater successor model in line with the international trend. The leading designer was Erhard Werner, who had been employed by Simson since 1949. However, the swallow was developed in a collective with Karl-Heinz Walther and Georg Schübel. It soon became apparent that a significantly more powerful engine was needed for two-person operation. In 1960, testing of four prototypes began, some of which were painted in two colors.

According to the specifications from 1962, the KR 51 model was designed as a moped without a speed limit and was designed for a top speed of 68 km/h. This was intended to create a moped that would also be competitive in the West, following the world comparison at the time. However, after negotiations with the responsible ministries, the speed was limited to 60 km/h in 1963. To do this, the translation in third gear was changed. 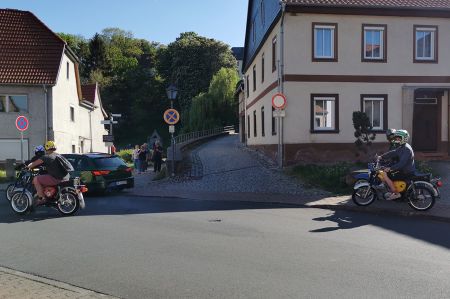 The KR 51 was designed as a small scooter with good weather protection, but the arrangement of the engine, body and driving characteristics show that it is less a scooter than a metal-clad mokick. A comparison with the predecessor KR 50 reveals an inconsistent further development of the shape, which was due to the need to retain expensive deep-drawing tools.

Karl-Heinz Walther, one of the designers of the Schwalbe, says: If you have a feeling for aesthetics, you can hardly describe the Schwalbe as beautiful. In 1964, the KFT judged that the Schwalbe had nevertheless succeeded in further developing the KR 50, which had been described as a failure in the rear area in particular, into an overall appealing vehicle. Above all, the design of the front fender was praised, which represents an almost ideal solution for a vehicle with a long-arm swing arm. 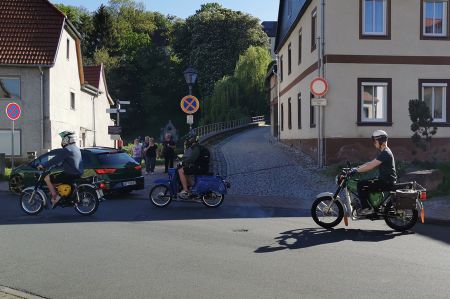 The Schwalbe was Simson's first two-seater moped. It had significantly better utility properties than the two-seater small scooter Jawa 05, which was also available in the GDR. The 50 class from the GDR gained a lot of sympathy thanks to the determination of the StVZO-GDR, according to which motorized two-wheelers with a displacement of up to 50 cm³ and with a achievable maximum speed of 60 km/h could already be driven by people who had completed their 15th year.

However, young people in GDR times generally preferred the sportier Star and Habicht moped models and later the S50/S51 series. However, the Swallow was hugely popular across broad age groups. At times, demand was so high that no new orders were accepted. Participating in this was the new price of 1265 marks, which was low even by the standards of the time. 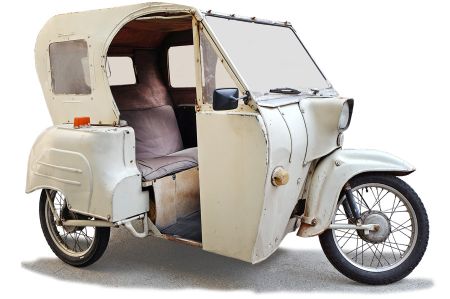 It already achieved a certain cult status through the 1975 film Sister Agnes. After 1990, the Schwalbe first developed into a cult vehicle in the West, and most of the Schwalbe fan clubs are still in West Germany today. In the meantime, however, it is also considered a popular classic in its home country. In 2015, around 150,000 Schwalben were registered for road traffic in Germany.

There are different information about the total number of pieces produced. In addition to the indication of 1,058,300 vehicles produced, there is a plaque on the former factory building that shows a total of 1,176,640 units.

Despite the noise, the stench of the 2-strokes - an eye-catcher, right?

The bike path along the Unstrut - Memleben monastery

Encountering the dike sheep on the Unstrut