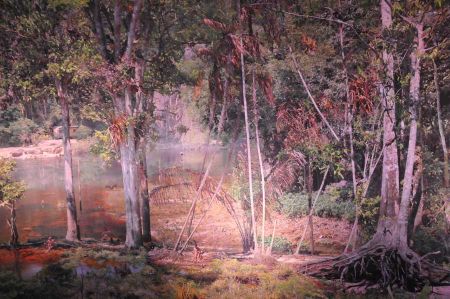 After our visit to the Leipzig Zoological Garden, Detlef took us to the panometer for the picture composition "Rainforest".

Yadegar Asisi exhibits his composition of images of the Brazilian rain forest in memory of the German natural scientist Alexander von Humboldt who died 150 years ago.

We had already reported several times about the architect Yadegar Asisi and his large-scale panorama pictures in Alaturka.info and so we used our presence in Leipzig to visit his picture "Amazonia", which, due to the improved image resolution, leads to new discoveries in the representation of animals when viewed over a longer period of time - and the flora of the rainforest leads, so many small animals can just be seen with binoculars.

What many visitors had researched for themselves in advance. 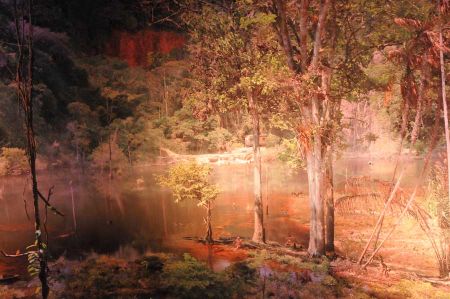 After the Franco-Prussian War, a rotunda was built on Roßplatz in Leipzig in 1883/84, similar to many other German cities, to display panorama pictures showing battle pictures of the Franco-German War. After the First World War, these panoramic picture exhibitions were discontinued and the building itself was destroyed during the war in 1943. When the artist and architect Yadegar Asisi recognized the possibilities of creating huge panoramic images due to advanced computer technology and printer technology at the beginning of the 2,000 years, he saw a disused gasometer as a suitable place to present these panoramic images. 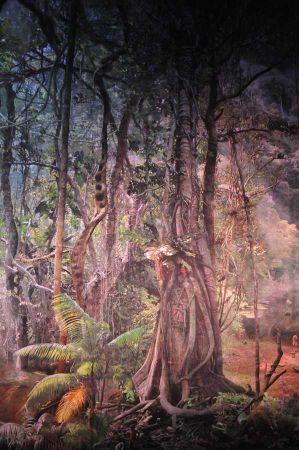 On the Connewitz site of Stadtwerke Leipzig, Asisi found one of three previously walled gasometers to be so interesting for his ideas that he began planning the building renovation and planning the exhibition in Gasometer II. In the years 1909/10, the Gasometer II was built by the City Planning Director Otto Wilhelm Scharenberg to store the city gas produced here and was even in operation until 1977. With the cessation of town gas production, the shell of this really huge telescopic container was no longer used. The circular brick building has a diameter of approx. 57 meters with a masonry height of 30 meters, and the dome is even 49.4 meters high.

The refurbishment of Gasometer II started in 2002; the roof dome was the particular challenge here, which was then completed in 2005. A foyer was built towards the neighboring gasometer, which was to receive a bistro in addition to the reception of the guests and groups who would come to the exhibition. 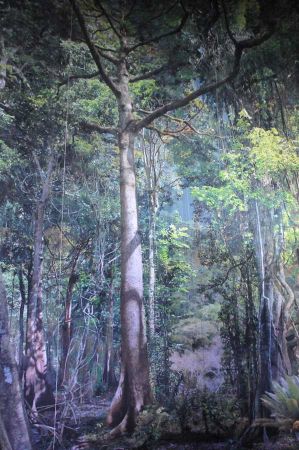 We now enter the foyer in eager anticipation and began the tour, which tries to provide deep insights into the fauna and flora of the tropical rainforest in an accompanying exhibition. In pictures and textual explanations, connections are explained, which are cleverly formulated and presented and stimulate thought. Sometimes it's an insect crawling into a flower, sometimes it's an oversized mosquito that is presented as a giant model. The activity and function of the ants are documented in a film that can be watched for hours.

Then finally the time has come and we enter the “Amazon region”, which is currently in the night phase. With the help of light and sound effects, a night and a daily routine are simulated so that you can really well understand the "picture". The sound effects supplied with it convey realism and reinforce the feeling of real presence in the Amazon. Just the smell is missing. 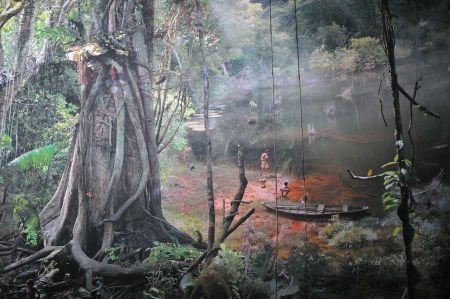 With the rising sun, the impressions of the huge picture are so intensified that the view only wanders around deeply. You really don't know where to look first. The whole thing is accompanied by the music of the Belgian composer Eric Babak.

The panorama picture created by Asisi has a length of 105 meters and a height of 30 or 35 meters, which was created on the basis of photographs, drawings and paintings. With the help of digital image processing, a huge image file was then created, which was then printed on individual textile strips to be printed and joined together. The resulting circular image was then hung in the gasometer.

After the first extensive tour on the floor of the jungle and probably several simulated daily routines later, we then climbed to the viewing platform in the middle of the panorama picture. Here you almost felt like you belonged between the giant trees, the light-flooded gaps in the trees and the many, sometimes downright hidden animals. The distortions of the picture elements introduced by Asisi really convey an absolutely spatial overall impression. You are present in the picture.

The daily thunderstorm in the tropical rainforest almost deepens the deep bond, so nature shows itself in wild opulence and abundance of life. We are really deeply impressed and can just point out new discoveries to each other. How often we switched between day and night during our stay was no longer comprehensible. It may have been hours. A fascinating panorama picture that always leaves deep impressions and makes you think.