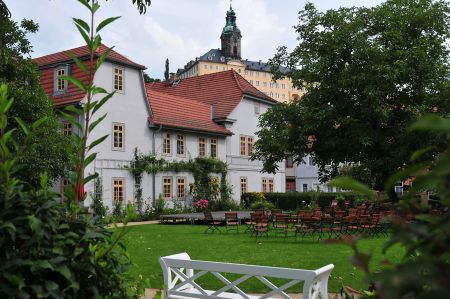 Rudolstadt is situated in the valley of the river Saale, which runs from the south to the east passing the "Saaleknie". The city was first documented in 776 and since 1326 has  got the city law.

A widely visible and well-known landmark is the castle Heidecksburg, high above the city, a further article about it will follow. As part of our exploration of the surroundings of the campground "Unter dem Jenzig", we had also visited Rudolstadt.

Long time ago, on the vineyard of today in Oberpreilipp, there used to be a fortified hillside settlement. The salvaged finds date from the outcropping field and the beginning of the ice age. A Celtic settlement followed the Germanic settlement and the affiliation to the Thuringian kingdom. From the time after 500 AD, a partial settlement of Slavs due to archaeological finds, is proved.

In 776, the place was first mentioned as a Rudolstate (Rudolf's settlement) as the gift of Charlemagne to the Hersfeld monastery.

At the beginning of the 13th century Rudolstadt was in the possession of the Counts of Orlamünde, of which it partly passed by 1300 and 1334 entirely to the Counts of Schwarzburg. Between the years 1264 and 1334, the "Niedere Burg" and "Obere Burg" (Heidecksburg) are documented in Rudolstadt. The former was presumably in the area of today's Ludwigstraße and Burgstraße, the other on the later castle terrace. 1217 is dedicated to a parishioner who was standing in the old parish church of St Andrew, who lived in the old town.

In the 14th century, the town experienced a major expansion. A settlement, built at the foot of the castle mountain along the road leading from the Schalbach to the Andreaskirche, received the municipal right through the counts of Orlamünde. This resulted in the construction of the town hall, market and fortification with the old gate and church gate. The earliest surviving document with the statutes dates back to the year 1326. Ratsmeister are first testified in 1378.
In the same century the lords of Schaala were called. They probably had an influence on the design of the defensive character of the church and the churchyard. Both church and cemetery were fortified until the middle of the 15th century to protect the citizens.

Rudolstadt had been owned by the Schwarzburg county since about 1340, and later became its capital until 1920. In 1345 the two castles and the town (town hall together with a large part of the old and new city) suffered considerable destruction by an Erfurt army in the framework of the Thuringian Count War. In the course of the reconstruction of 1345 to 1437, the city got a completely new face (extension of the city fortification). Between 1434 and 1448, the Obere Burg was extended to a three-lane system. In 1573, the successor building was partially destroyed, after which the three-storey renaissance castle was built. In 1548 there were free settlements of the Black Counts at the place of the lower castle.

After the Thirty Years' War the original "Neustadt" was built to the "Old Neustadt" and the "Neue Neustadt". The 18th and 19th centuries the city were flourishing, as many artists lived and worked here. Friedrich Schiller also often stayed in the city. He became acquainted with his later wife Charlotte von Lengefeld and met Goethe for the first time in Beulwitz's house, which is today a Schiller museum, on September 7, 1788.

In addition to Schloss Heidecksburg, the Stadtschloss Ludwigsburg is one of the most important historical buildings in the city, as is the magnificent Protestant St. Andrew's Church, built in the 15th and 16th centuries, and richly Renaissance in the early 17th century. Other churches are the Evangelical Lutheran Church by the eminent church architect Theodor Quentin, a neo-Gothic building from 1906, as well as the Catholic parish church of 1886 (Neuromanik).

The Old Town Hall in the Stiftsgasse is a late-Gothic building from the year 1524, which was completed in 1603 by a tower. The New Town Hall was inaugurated in 1912 on the market square.

The three Thuringian farms in Rudolstadt are the oldest open-air museum in Germany. The houses from the 17th and 18th century were removed in the surrounding villages in the years 1914/1915 and rebuilt in the Rudolstadt town park. Particularly worth seeing is the establishment of an old village pharmacy.

Impressions Prague - Everyone keeps them in an own way

Prague - further destination of our camper-route.de to the South