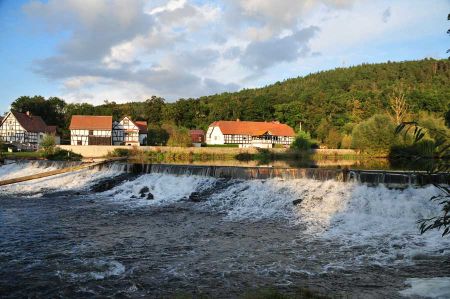 In the meantime we had completed our tour of the imposing, roofed and ancient wooden bridge across the White Elster, climbed up to the church and then walked along the river back to the camp of the bicycle camping trailers, who had now gathered around the campfire with grilled sausage and cool drinks.

A great, completely different camping atmosphere, as everyone knew about their really exciting tours in a bike trailer. But more on that later.

Fords across the Elster were the basis of the settlements 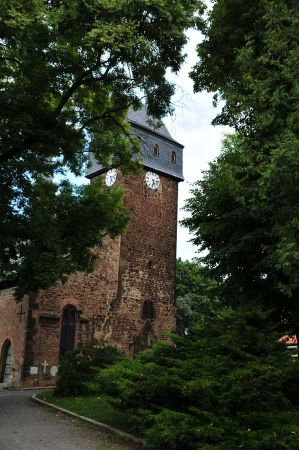 Due to its special location, the Wünschendorf region on the southern edge of the Leipzig lowland bay merging into the deeply washed valley on the elongated ridge of the Veitsberg, the region was settled in prehistoric times. The original village, located at the confluence of the Weißer Elster and Weida, lay in the early Middle Ages on the edge of a Slavic settlement chamber around Gera. This is also indicated by the place name, which is derived from Wendendorf - Windischendorf. The ridge called Vitusberg today is said to have initially supported a castle from which the six fords over the Elster could be controlled and protected. In writings from the 16th century, 974 is mentioned as the year the St. Vitus Church was founded. Today's church building goes back more to the 11th or 12th century. The church is one of the oldest churches in the Vogtland.
In 1193, not far from the village, the Mildenfurth monastery was donated by the bailiffs von Weida as a house monastery. Then the original place name Mildenfurth for Wünschendorf (1209: in slavica villa Mildenvorde) gradually passed to the monastery. In 1238, Jutta, the wife of Heinrich IV., Vogt von Weida, founded the Cronschwitz Monastery, another house monastery for female family members and the Vogtland nobility. Only the ruins of the church have survived to this day.

Hill country in the transition to the Ore Mountains

The landscape of the Vogtland looks very idyllic with fields, meadows and wooded hilltops. In the south and southeast, the Vogtland rises to the low mountain range and, especially in the east, also includes parts of the Ore Mountains. There the coniferous forest predominates (spruce, mostly in monoculture). The city of Adorf is considered the gateway to the Upper Vogtland and forms a crossroads to Bohemia and Franconia. The highest mountain in the Vogtland is the Schneehübel (974 m) in the Western Ore Mountains. However, the Aschberg near Klingenthal (936 m) and the Schneckenstein (883 m), both also in the Western Ore Mountains, are better known and more striking.

Saale, Weisse Elster and Göltzsch cut up the landscape 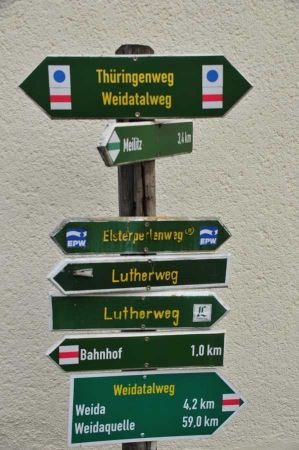 The more northerly hill country is cut through by some river valleys, especially the Weisse Elster and the Göltzsch. Furthermore, the Saale runs through the Bavarian and Thuringian Vogtland. Mighty bridges were built for railways and road traffic to cross the valleys. The Göltzschtalbrücke, the largest brick bridge in the world, and its “little sister”, the Elstertalbrücke, achieved particular fame. Both are railway bridges on the Nuremberg – Dresden connection. In addition to the road bridges on the A 72 autobahn at Hof (Saale Valley), at Pirk (Weisse Elster) and at Weißensand (Göltzsch), the Friedensbrücke in Plauen is of particular importance: It is the largest stone arch bridge in Europe. There are also a number of dams in the Vogtland. The Pöhl dam (Trieb, a tributary of the White Elster), the Pirk dam (White Elster), the Bleilochtalsperre (Saale), the Zeulenroda dam and the Untreusee are known as recreational areas.

Volcanic activity in Vogtland to this day 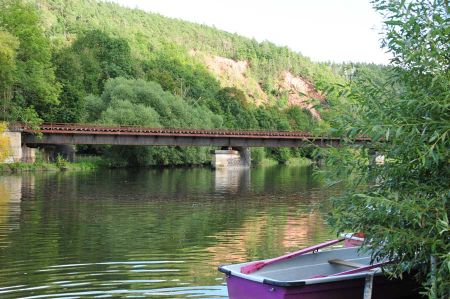 The Vogtland is one of the most volcanically active zones in Central Europe. Signs of this are swarm quakes, mineral springs and gas leaks. With 100 noticeable small earthquakes in 1824, an earthquake swarm was first described there. There were stronger earthquakes in the region in 1897, 1903, 1908, 1936 and 1962, 1985 and 2000 and 2014. In the winter of 1985/86 the strongest earthquake recorded so far was in Vogtland / Bohemia, which reached a magnitude of 4.6 on the Richter scale . The latest swarmquake series took place in July / August 2018. The health resorts of Bad Elster and Bad Brambach with the strongest radon source in the world have allowed springs with healing properties to flourish. With Marienbad, Franzensbad and Karlsbad on the Czech-Bohemian side, the two Saxon state baths form the so-called bath pentagon.