The scenically beautiful village of Dornburg is located in the middle of the Saale valley between the cities of Jena and Naumburg (Saale), a region that is always good for a discovery hike.

The city of Jena is only about 10 km away, Naumburg 20 km and Camburg, the next city down the Saale, is only about 6.5 km away. As always, we did a little research this time and came across a circular hiking trail that led us largely along the Saale, albeit high up. The last part of the hiking route, which leads along the steep slope to Dornburg Castle, is particularly exciting, where a number of other highlights awaited us. 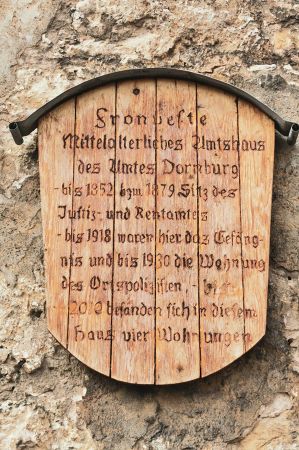 The name of the town of Dornburg derives from Dornburg, which was probably created in the 9th century as a Carolingian imperial castle. However, it is not yet known whether the first castle was built in the 10th century. A prerequisite for the construction of the castle on the plateau above the Saale was the strategically favorable location at the crossroads of important trade routes, one of which passed through the Saalefurt near Hummelstedt. In 937, at the request of his mother Mathilde, King Otto I donated all income from Dornburg and Kirchberg to the nunnery in Quedlinburg. Later he left the income from Dornburg and other places to his court chaplain Boso, who later became Bishop of Merseburg. Under the Saxon emperors, Dornburg was one of the cities with a royal palace and had a castle in which the emperors had met and held meetings since 965. In the year 971 the Palatinate is said to have burned down with its church. In the 10th century, together with Kirchberg Castle, it became part of imperial politics under the Ottonians. Numerous visits by kings suggest a spacious palace. After the death of Otto III. in 1002, King Heinrich II held an imperial assembly in Dornburg. 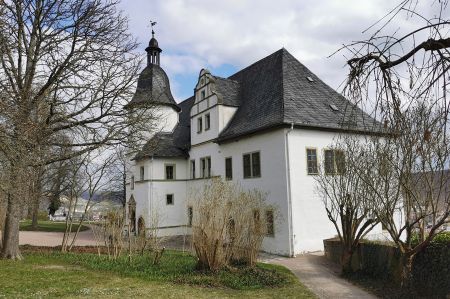 With the construction of the Saale bridge in Dorndorf, the Saale crossing near Hummelstedt lost its importance and the place became deserted after 1209. Findings from excavations carried out in 2010 as part of the development of building land on the plot of land in the old town on the extended high plateau suggest that the original imperial palace was located there.

In 1081, Count Wiprecht von Groitzsch received Dornburg from Heinrich IV. In 1287 the castle was first associated with the Vargula taverns. It is unclear when they acquired this, but it could have been at the same time as the fiefdom of Tautenburg. Among these, the medieval settlement was probably relocated half a kilometer west of the castle, directly to the rocky outcrop. The city rights were also granted during the time of the taverns, because during the Thuringian War of Counts in 1343 it was first mentioned as a city with citizens when it was sold to the Schwarzburger and those from Orlamünde. In 1357 it came to the House of Wettin, who created an office in Dornburg a short time later. This office existed almost unchanged until the 19th century.

The extensive castle warden system under the Carolingians to secure the counties also included the Saale area. There are no more precise reports from this period. But there are a number of indications, such as the possible transfer of the name Dornburg from a castle of the same name in the Scheldt region mentioned in the 9th century, or the accumulation of Carolingian royal property in the immediate vicinity of Dornburg. 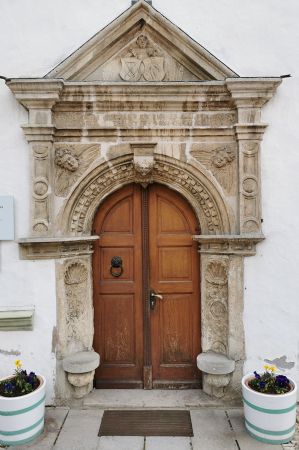 Dornburg was first mentioned in connection with nearby Kirchberg in 937. The Liudolfinger expanded the existing castle under King Otto I as a palace, to whom they paid a number of visits over the following decades. The previous assumption that today's "old castle" is located in the same place as the Palatinate at that time can almost be ruled out according to recent investigations. Otto I visited Dornburg in the years 952 and 958 and as Holy Roman Emperor in 965 on the occasion of an Imperial Diet. Further Diets took place in Dornburg in 980 under Emperor Otto II and 1004 under King Heinrich II. After the Ottonians died out, the royal palace disappeared from the direct perspective of the new kings. As a result, there are no further documents about stays and other events about the castle and the castle district, although it was certainly still in the possession of the empire. Whether this Palatinate stood in the same place as its Carolingian predecessor cannot be verified. Possible locations of this Palatinate were only recently discussed in a master's thesis by P. Fütterer. The location of the current old castle has become very unlikely, at least from an archaeological point of view. Also with regard to the function of a Palatinate as a crossroads of trade routes and roadblocks, the mountain spur above Naschhausen should be rejected.

Dornburg came to the Count von Wiprecht von Groitzsch as a gift from King Heinrich IV in 1083, although it is no longer clear whether this was the former Palatinate or whether the general mention was of the Dornburg district , without thinking of a concrete attachment. The foundation walls of the Old Castle, which according to the latest investigations date back to the first half of the 12th century, cannot yet be classified as a locality. Unnamed ministeriales seem to have administered the district of Dornburg from a purpose-built Dornburg Castle on the site of the Old Castle. This is indicated by the appearance of imperial ministerials, such as the Lords of Lobdeburg, who were probably invested with the rule in the course of the 12th century. At least the 1261 allows for this conclusion in a genuine document in which the lords of Lobdeburg appear as judges in Dornburg. As in Tautenburg, the lords of Lobdeburg were followed by the taverns of Vargula, who named themselves after Dornburg for the first time in 1282 and had received this as an imperial fief. This period lasted until 1343/44, which ended with the transfer of ownership to the Counts of Orlamünde and Schwarzburg. The town of Dornburg in front of the castle was first mentioned in 1343. After the Wettins forced their feudal rule on the new owners in the same year (War of the Counts), the Wettins placed Dornburg under their direct administration in 1358. The old imperial castle was besieged, conquered and severely damaged during the Saxon Civil War. The so-called Old Castle, which is known today, was probably built on its foundation walls, which underwent some fundamental modifications in the 16th century. 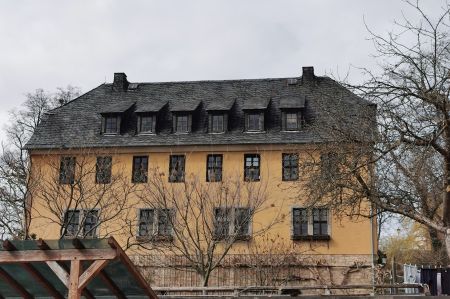 The so-called Old Castle, which was probably built by 1522 on the foundations of the Ministerialburg Dornburg, which was severely damaged in the Saxon war in 1451, is the northernmost and oldest of the three Dornburg castles. Any existing parts of the previous ministerial castle were included in its construction. From 1562 to 1573, Duke Johann Friedrich II of Saxony undertook further conversion and expansion of the palace. During the Thirty Years' War, the city and castle were plundered and devastated by imperial Croats. The castle was the widow's seat of Wettin prince widows three times. After Duke Ernst August of Saxe-Weimar-Eisenach moved out of the palace in 1717, the palace lost its importance and became the administrative seat of the Dornburg office. From 1750 the castle was used, among other things, as a cotton mill, barchent (textile) factory and school. The castle began to deteriorate in the 19th century. Grand Duke Carl Alexander of Saxe-Weimar-Eisenach had the first monument preservation work carried out on the palace in 1883. After 1945, the old castle was temporarily used as a retirement home, but continued to deteriorate in the decades that followed. After German reunification, the Old Palace was transferred to the Thuringian Palaces and Gardens Foundation on June 26, 1995. It was then extensively restored with funding and has since been open to the public for pre-booked tours[3] from April to October. Since 2004, the Old Palace of the Friedrich Schiller University Jena has served as a meeting place.

The rococo palace is the middle and youngest of the three Dornburg palaces. From 1732, Duke Ernst August of Saxe-Weimar-Eisenach had 21 town houses demolished as part of his plans for a large army show in the Saale valley based on the example of Augustus the Strong's pleasure camp in Zeithainer and the rococo palace built in their place by the chief master builder Richter. The predecessor of today's castle was built on the foundations of the clerk's house.

Due to structural defects, however, the castle had to be demolished again. The master builder Gottfried Heinrich Krohne from Franconia rebuilt today's residential building (corps de logis) including side pavilions by 1747. After its completion, however, the palace was hardly used by the ducal family, and all side and farm buildings that had been completed up to that point were demolished, except for today's royal stables. From 1776 onwards, Johann Wolfgang von Goethe, as ducal minister, used the castle as his quarters during official stays in the Dornburg district, since the so-called Goethe Castle only became the property of the duke after 1800. From 1816 to 1817, Duke Carl August von Sachsen-Weimar-Eisenach had the palace extensively renovated and set up as a summer palace. In the winter of 1818/19, the state parliament of the duchy met in the palace during its first session. The Landtag convened by the Duke was the first parliament of a constitutional monarchy in Germany. From 1900 the rococo palace was used as a museum. A lack of building preservation measures led to structural decay, which led to the closure of the castle around 2000. The rococo palace underwent thorough renovation in the following years and has been open to visitors again since June 2006. 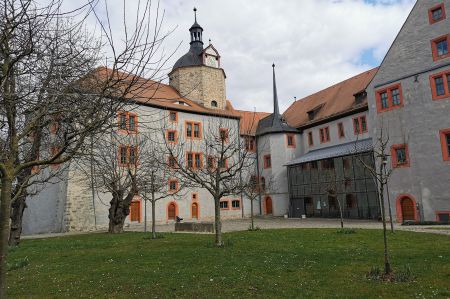 The Renaissance castle, also known as Stohmann'sches Schlössschen or Goethe's castle, is the southernmost and second oldest of the 3 Dornburg castles. It was built in 1539 by Volrad von Watzdorf in place of a 14th-century manor house. The Lords of Thüna and von Eberstein came into possession of those of Watzdorf through inheritance. Due to the excessive debt of the owner of Watzdorf, the castle was sold to Duke Johann Wilhelm von Sachsen-Weimar in 1571. After his death in 1573, the castle was inherited by his son, Duke Friedrich Wilhelm I of Saxe-Weimar. Around 1600 the castle came into the possession of the official locksmith Wolfgang Zetsching and remained in the possession of this family for 4 generations.

From 1605 to 1608, the building was expanded with additions to the castle in the late Saxon Renaissance style. In 1715 the bailiff Arnold bought the castle. Since the property was in debt, the castle came to Duke Ernst August of Saxe-Weimar-Eisenach in 1739. However, in 1755 the creditors forced the auction of the castle. Hofrat Scheibe became the new owner of the Renaissance chateau, who inherited it from his son. He sold the castle to Gottlob Ludwig Stohmann. After his death in 1824, Grand Duke Carl August von Sachsen-Weimar-Eisenach acquired the manor of the former manor and had it converted and expanded into a residential palace. The English landscape garden that still exists today was created at this time.

After the death of Grand Duke Carl August, Johann Wolfgang von Goethe retired to Dornburg and lived in the Renaissance palace from July 7 to September 11, 1828. Here he wrote his Dornburg poems.

The Renaissance castle has been used as a museum as a Goethe memorial since 1922. Around 1960, neo-Gothic elements of the design phase from 1824, a staircase and the furnishings of the so-called coat of arms room, were removed. Instead, wall paneling from the Jena Castle, which was demolished in 1905, was installed in the former Coat of Arms Room.