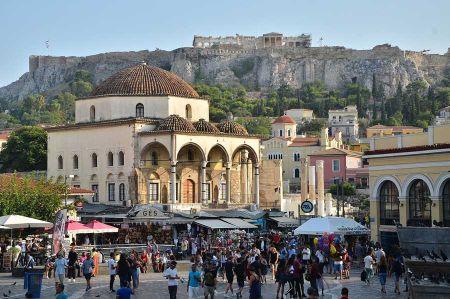 The history of the area of ​​today's city of Athens goes back to about 7500 years BC until the Neolithic period. Around 1300 BC a first Mycenaean palace was built on the Acropolis.

The oldest city complex was limited to the upper surface of the steep rocky hill, just accessible from the west, which later was formed as a castle / marketplace (Acropolis), the military and religious center of Athens. The whole area was already leveled very early and surrounded by a strong wall, which was secured with nine successively arranged gates (Enneapylai). Opposite the outer city gate has been the city's oldest market, the world´s famous Agora. This plant was named Pelargikon due to the tribeof the Pelasgians, to whom the castle was attributed. Within this castle the ancient kings of this part of Attica once lived. According to mythology, Athens was founded by King Kekrops, which is why Kekropia is the ancient first known name of Athens.

The mythology about name giving of Athens 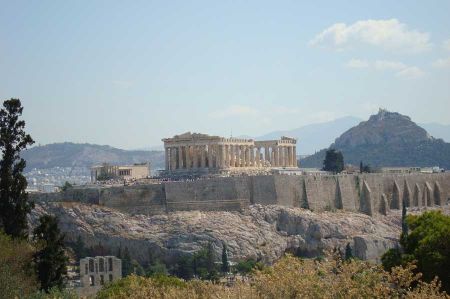 Athens has always been under the special protection of Zeus, as well as to the city's protective Athena (Athena Polias), to whom the city's oldest temple, the Hekatompedos, was dedicated.
According to legend, the goddess Athena and the god of the sea, Poseidon, vied for the favor of the inhabitants of the city, which at that time was rarely called Kekropia. Both should give the inhabitants a gift and namesake should be who could make the city the best gift. The multiple traditional competition can be found in the records of Herodotus, at the library of Apollodor, Pausanias and Plutarch. Poseidon gave the city a well or a spring, which he opened with his trident, but only salt water bubbled. At Ovid he gave the city a horse. Athenes gift was an olive tree. This donated food, olive oil and wood to the locals. Athena won the competition and so the city was named after her.

The fabled King Theseus is said to have united the various parts of the landscape of Attica into a polis. Athens was henceforth the area after the largest Greek city state (apart from the special case Sparta). Perhaps the memory of this so-called synoismism of Theseus is, also based on the creation of a Mycenaean palace center, from which it was founded from the 14th century BC onwards. Large parts of Attica were controlled and administered, whereby regional princes lost power.

Athens became a polis - next to Sparta 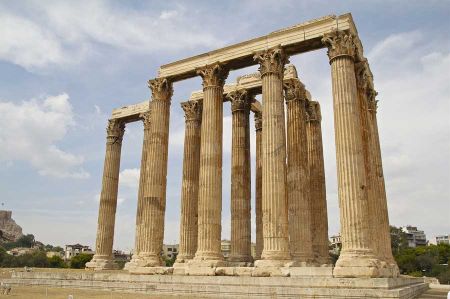 Similar developments took place at the beginning of the Mycenaean palace period in other regions in which powerful palace centers were created, i.e. in the Argolis, Messenia and Boeotia.
The climax of its political and cultural influence reached Athens as Attic Democracy and leadership in the Attic League during the 5th and 4th centuries BC. (Classical time).

Even as the city was incorporated into the Roman Empire in the 3rd century BC about 86 BC and maintained its status as an intellectual center, it was reaching the peak of its urban development in the 2nd century AD. In the crisis of the 3rd century, Athens was conquered and burned by the Germanic heruls in 267 AD. The city remained significant even in late antiquity. This changed after the year 529 AD, when the last schools of philosophers were closed by order of the East Roman Emperor Justinian I. The Slavic invasions ended the ancient phase of the city's history in the late 6th century; followed by a "dark time".

Possibly the eldest city with watering system for its inhabitants 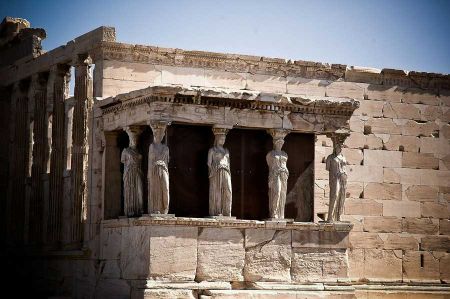 Athens is probably the oldest city that introduced artificial water supplies to its inhabitants. Although the amount of water was praised by the spring Kallirrhoë, it was far from sufficient, despite the existence of numerous cisterns and wells. In ancient Athens, the water from the Hymettos and Pentelikon (two mountain peaks near the city) was brought in lines, a part of which is preserved and still carries water. Like to be seen in the metro station Monastiraki.

Scientists from all parts of the ancient world came to Athens during the classical period, and this was promoted by them. A distinction was made between Xenoi and Metöken, the former designating the persons who spent a brief study period, the latter living permanently in the city and enjoyed civil rights, including philosophers and doctors such as Anaxagoras from Klazomenai, Protagoras from Abdera and Hippocrates from Kos.

Even in Roman times, Athens was a popular place of study. It was not until the 18th century that archaeologists and art historians from Western Europe came to Athens and spent long periods exploring antiquity. With the founding of the Kingdom of Greece, the first two universities in the country were founded, previously there was only the Ionian Academy in Corfu.