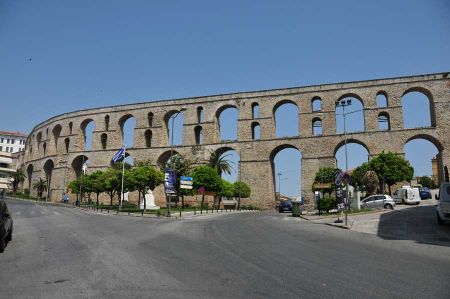 Several times we have reported about the various sights and highlights on the ancient Roman road Via Egnatia, which ran between the port of Durrës (Albania) and Istanbul, which means between the Adriatic Sea and the Bosporus across the Balkans.

This first antique "highway" over the Balkans was already built around 146 BC. And Kavala was, between Thessalonica and Alexandroupolis, a very important station along this route. Not without reason, the name already points to horses, typical for a place that also served to change horses on a trade route. A few hundred meters of the ancient Roman road is well preserved in Kavala, similar to that one in Thessalonica below modern Via Egnatia. Unfortunately, the place is not signposted and you really have to search a bit. From the center of Kavala walk a bit towards the road to Drama, after about 750 meters right after the Hotel Egnatia there is a parking lot and a viewpoint on the left side of the road. From there, a path leads 150 meters downhill to the ancient Via Egnatia. 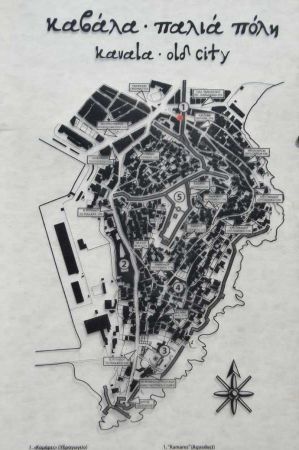 Neapolis prospered by mining silver and gold in the Lekanis Mountains. This was associated with the early introduction of its own currency, which promoted its political and economic independence from the metropolis of Thasos. 168 BC, Neapolis became a city (civitas). In 49, holy St. Paul went ashore from Tarsus in today's Kavala and founded the first Christian community on European soil in Philippi.

In the Byzantine era, the city was renamed Christopolis (Christ City). The Venetians fortified the town with a castle during their brief occupation of the peninsula Panaghia. Today's name Kavala comes from the importance as an important post office, where the horses (Italian "cavallo") on the Via Egnatia were changed.

Kamares - the aqueduct of Suleiman the Magnificent 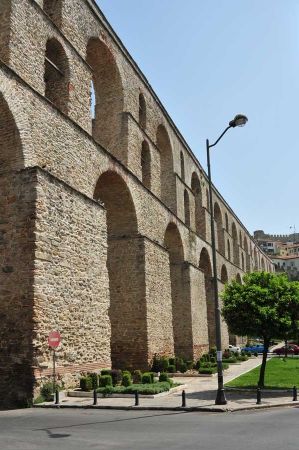 The very well preserved aqueduct "Kamares" was cleaned and repaired a few years ago and therefore looks more like a new building. Due to its magical impression alone, it is one of the landmarks of the city. It is probably of Roman origin, so the foundations suggest that these were built at least between the 1st and 6th centuries AD, but the current structure dates back to the 1630s. During the reign of Sultan Suleiman the Magnificent, extensive repairs and improvements were made to the former Byzantine fortifications and aqueduct. It is up to 25 meters high, 280 meters long and contains 60 arches.

The northern end of the aqueduct is connected to the 6.5-kilometer overland water pipeline, which once supplied fresh drinking water from the sources to the city of Palia Kavala. The elevated sections of the aqueduct with their successive arches bridge the lowest floor between the rocky Panagia peninsula and the highest opposite point, providing fresh water to certain points of the city such as public water wells, Turkish baths, mosques, etc.