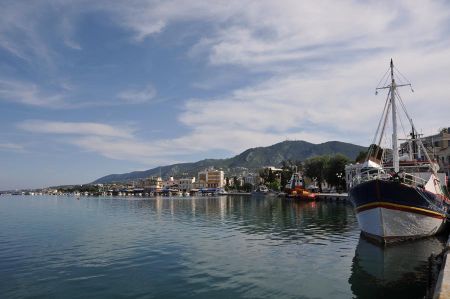 In order to get away from the hectic city of Izmir for a short time, we planned a short weekend trip to Lesvos, the Greek Aegean Island just off the Turkish coast near Ayvalık. 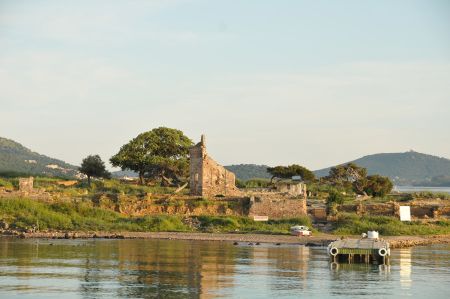 Lesvos is the third largest island in Greece by its area of ​​more than 1,600 km² and ranks eighth among all Mediterranean islands in terms of surface area with around 90,000 residents. Lesvos or Lesvos, as it is often written, is called Midilli Adası in Turkish, based on the name of the main town of Mitilini, which is only about 10 kilometres from the Turkish coast and was also the destination of our ferry connection. The car ferry left Ayvalık on time, from where it first went between the two peninsulas of Cunda and Kumru in front of Ayvalık in the direction of Lesbos. The high mountains on the island could be seen from afar, especially on a day of glorious sunshine with extremely good visibility. The ferry crossing could already be enjoyed on the "sun terrace" of the small ferry.

Both gulfs are only about 20 meters deep 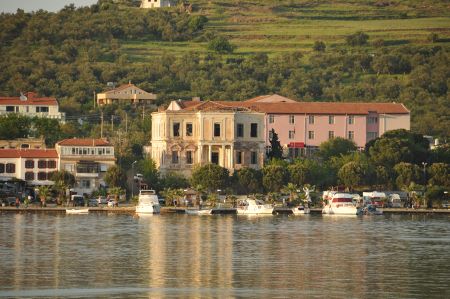 Like the majority of the Greek islands, Lesvos is also of volcanic origin, but here with mountain massifs up to 1,000 meters high in the north and south of the island, which are still largely forested with Mediterranean pines, but also with oak and walnut trees. About 20% of the island is covered by these forest areas, another 50% is agriculturally covered by olive and fruit tree groves and used accordingly. So you can definitely speak of a green island. In the north, the Lepetymnos massif is the highest elevation at 968 meters above sea level, in the south it is Olympus, which is almost as high and also reaches an impressive 967 meters. Other high massifs are the Profitis Ilias at 799 meters and the Kourteri at 527 meters on the Amali Peninsula. Between the mountains there are large plains that are crossed by rivers that carry water all year round. The island is subdivided by two huge bays encroaching from the south, which look almost like large inland lakes. The 6.5 km long Gulf of Gera in the south-east is connected to the sea by a natural channel about 200 - 800 meters wide, the Gulf of Kalloni is almost 21 km long with an area of ​​110 km². Both gulfs are only about 20 meters deep. A few small but uninhabited islands surround Lesvos.
Once arrived at the port of Mitilini, the few cars and passengers were quickly unloaded and, after renting a vehicle directly at the port without any problems, we were able to set off to explore the island for the first time. We were greeted in a friendly and accommodating manner everywhere on the island, despite the sometimes-hectic hustle and bustle at the port. First we drove out of town in the direction of Panagiouda, where we wanted to see the Roman-era aqueduct in the town of Moria. 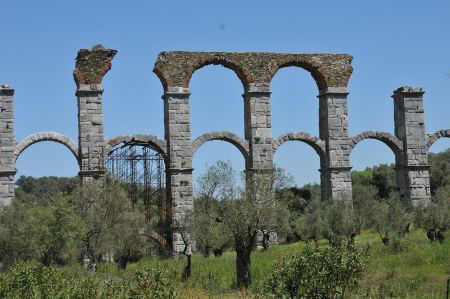 The Roman aqueduct is located about 600 m outside the town of Moria and was built in the 2nd or 3rd century during the Roman era on the island of Lesvos. According to our research, more detailed information is not available. The great bridge construction across the valley served to bring water from the springs in the Agiasus region to the city of Mytilene. A large part of the aqueduct with its large arch segments is very well preserved. The gray marble used to clad the structure came from a nearby quarry. On top of the arch construction was the system of pipes made of natural stone, which was responsible for transporting water from the source of Megali Limni on Mount Olympus in the 26 km long pipeline system. Other parts of the aqueduct were found in gorges of Lesvos. Here at Moria is the longest part of the aqueduct, 170 meters long. An absolutely worth seeing relic from antiquity. 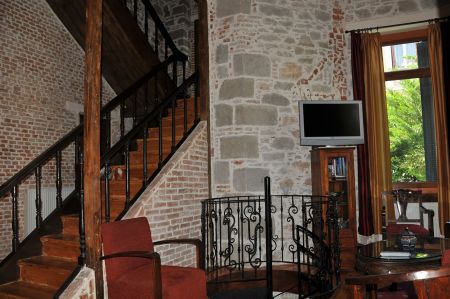 We continue towards Mantamados where there is said to be an ancient monastery. Unfortunately there was some discussion here with an elderly lady who forbade photography. However, she did not give any real reasons for this. After reaching the village of Skala Sikamineas, we first went for a short walk into the village, which, due to the onset of hunger, soon drove us to a small restaurant that tempted us with baked sheep's cheese and fresh salads. We were immediately involved in discussions and thus received not only further information about the island but also a first insight into the history of the island of Lesvos, which was inhabited as early as the Neolithic Age. Early human traces in the form of stone artifacts found at Lisvori suggest human settlers during the Middle Palaeolithic.

Feta cheese along with fresh salads 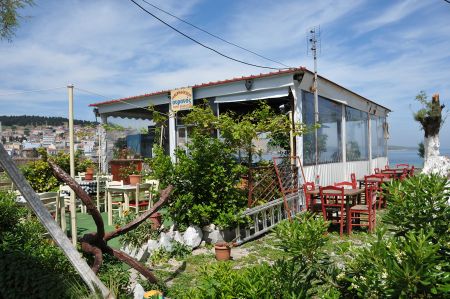 From the 13th century BC there are two Hittite texts that give Lesvos the name Lazba and date from the time of Great King Muršili II. At that time Lesbos was part of the great empire and belonged to the vassal state of Šeḫa. One of the inscriptions comes from the transfer of an idol to Hattuša under King Muršili II, the second inscription tells of an attack on the island by Pijamaradu, a prince from the Arzawa region.

In ancient times, Lesvos received an enormous boost due to the port of Mytilene (Mitilini), since an important trading centre arose here. These successes as a trading and naval base then led to the siege of the city of Mytilene by the fleet of the Spartan Kallikratidas in 406 BC, who saw his chance to expand his power in the siege, since a large part of the Athenian fleet was anchored in the port. A fleet sent from Athens to help was able to break through the siege ring and the Spartan fleet was defeated during the Battle of the Arginuses.

In 1462 Lesvos was conquered by the Ottomans under Mehmed II and remained part of the Ottoman Empire until it was recaptured by Pavlos Kountouriotis and his troops in 1912. The Treaties of Sèvres and Lausanne then regulated the definitive affiliation to Greece, which was however interrupted by occupation by German troops during the Second World War.

The fleet of the Spartan Kallikratidas 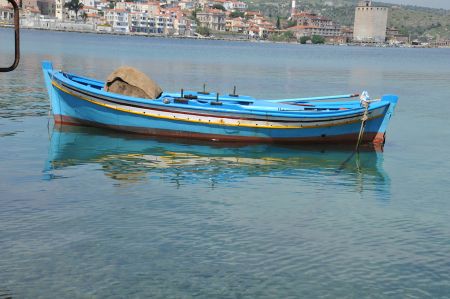 Our friendly innkeeper pointed out the lava domes to the west of the island, where there are more than 30 former lava domes and some volcanic calderas at Skoutari, Vatousa, Agra and Anemotia. In the village of Polichnitos there are still clear signs of the once very active volcanism on the island, because here you can find the hottest springs in Greece, which at least bring water temperatures between 70 - 85 ° Celsius to the surface. Of course, we would like to thank you extensively for the comprehensive information, which we can certainly only partly explore for ourselves. Two days is far from enough to fully explore the island of Lesvos, even when we are told that between Antissa and Sigri at the opposite end of the island there is a petrified forest dating back to 23 million years ago. There won't be enough time for that.

We leave the place towards Mithhymna, whose ancient name was Molyvos. A beautiful place with an idyllic harbour in beautiful surroundings, where there are even an old fortress ruins. A calm and quiet place, ideal for relaxation and recreation. Unfortunately, we only have time for an ice cream at the port, because the time is advanced and we have to go back to the hotel in Mitilini.

Lava domes located in the west of the island 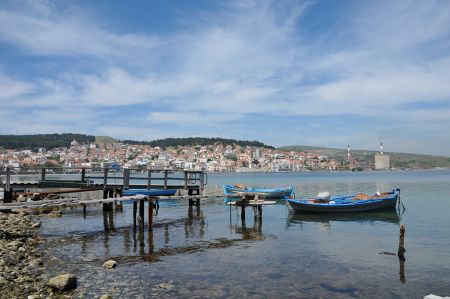 The name of the island patron Lezbos is also known from Greek mythology. His son Lapithes is said to have once married Methymna. However, whether the term "lesbian" can be derived from the name of the island is still controversial. But since the ancient poetess Sappho, who came from the island of Lesbos, sang about love for women in her poems, at least a connection is conceivable. The fact is, however, that in circles of same-sex female lovers, the island of Lesbos still has a special attraction. Much to the displeasure of the authorities, who want to absolutely prevent the island from having any connection to same-sex love and even refused entry to holidaymakers for these reasons, even passenger steamers with corresponding guests were prohibited from docking in the past. Today, the most famous place for meetings of the lesbian movement is definitely the city of Eresos, which is also said to be the birthplace of Sappho.

Back to Mitilini to the hotel 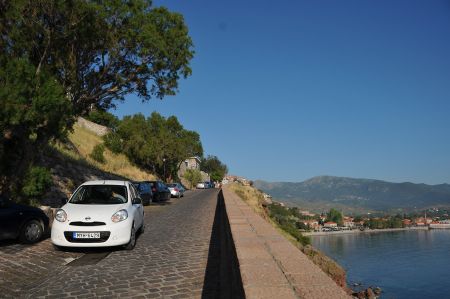 After breakfast the next morning we set out to explore the town of Mitilini and here it is again the ruins of the fortress that particularly fascinated us. There is still time for a small round trip that takes us the 6 kilometres to the Gulf of Kolpos Geras. And in fact, this bay, which looks like a lake, is only a few kilometres away from Mitilini. We drive along the bay on a sometimes quite winding route until we reach the narrowest point of the connection to the sea. One could almost think that they can be crossed without any problems, the other bank seems so close. The return trip to Mitilini is then quickly completed in the early afternoon and so we are back at the ferry in the direction of Ayvalık in good time. Of course, it was much too short again, but it was enough to get to know each other. A worthwhile destination, even if it was only a short trip this time.

Bosnian War and Destruction of the Stari most

After leaving Caravan Salon hike to relax on the Rhine