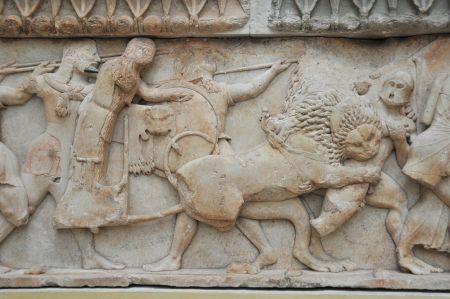 Very extensively we had walked through the outdoor facilities of Delphi, which in deed are rightly listed in the list of World Cultural Heritage of UNESCO, so impressively well and historically explaining are the ruin fields and the monuments and the buildings themselves are preserved perfectly.

Additionally, Delphi is beautifully situated on a semicircular mountain ridge north of the Gulf of Corinth. At the foot of the Parnass mountain range, the ancient town was placed at an altitude of about 700 m above the valley of the Pleistos river. To the coast, which you can be seen well with the naked eye, it is only 15 kilometers. Accordingly, the view is fantastic.

Now we had a visit to the museum, where we wanted to deepen our knowledge by the help of the artifacts and explanations, especially about the architraves and columns. However, it quickly became clear that the time we had chosen was completely wrong, because many coaches had attracted tourists from the Far East in such a large number, that crowds assembled in the rooms of the museum, so just couple of shots were possible. Therefore, we quickly made the decision to use the tour to take photographs, but to repeat the exploration at a later date.

As early as the eighth century BC the worship of the god Apollo had prevailed in Delphi and the oracle could be developed. According to the winged snake Python, which Apollo is supposed to have killed here, Delphi was also known as Pytho. In the late 6th century a new temple was erected for Apollo after a fire, which lasted until the early 4th century, when it was replaced by a new building. Delphi's Panhellenic competitions were, after those of Olympia, the most important, and soon, treasures were erected, in which the numerous precious gifts were kept, dedicated to the Delphic Apollo.

Not at least because of these treasures the control of the sanctuary was of great importance. First, Delphi was under the supremacy of Kirrha, a town at the mouth of Pleistos. In the First Holy War (600-590 BC), Kirrha was subject to an alliance of Thessalians, Sikyonians, and Athenians, and Delphi came under the control of the Amphictyons, which lasted until the Macedonian conquest in the fourth century BC. Since 277 BC, the Aitic League has been controlling Delphi for almost a century. Even in Roman times, the sanctuary remained a much visited pilgrimage site by the Roman emperor Theodosius I in 392 AD until the prohibition of pagan cults. The activity of the oracle was probably finished a few years earlier.

Delphi's wealth is highlighted by a visit to the museum, because the preserved segments of the architraves, the pillars and capitals show incredibly fine-grained motifs, sculptures and mosaics, which must be regarded as true masterpieces of marble processing. The work is so fine that even the finest facial features can be seen very well, and one could almost think of photographs.

The originally very powerful and tall architrave (horizontal beams on the pillar columns) of the Doric architecture become flatter in the course of the development, and in the classical period they reach only about two-thirds of the lower column diameter, corresponding to the motifs and the flattening.

The architraves of the Ionic and Corinthian orders may also be smooth, but usually have two or three horizontal strips, so-called fascias. For instance, on Archaic Apollo Temple of Didyma, the Architraves were decorated with Gorgons, with lions joined on the sides. However, the early Ionic temple did not have a separate frieze as a structural member, which could have absorbed such relief's.

We can only recommend the visit of the museum, when you travel around the area of Delphi. In consultation with the staff, however, the early morning hours are more appropriate, if one wants to look at the artifacts with less visitors.

The Ohrid Lake and its bubbling springs