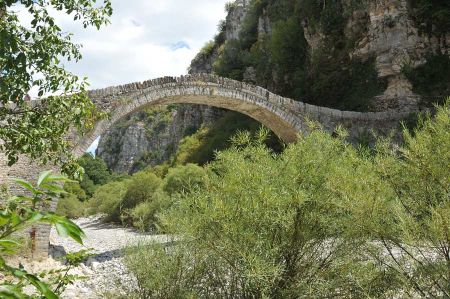 Our tour through the Pindos National Park had first led us to the villages of Kapesovo and Koukouli, both of them, so at least local documents, were founded in the 13th century.

Under the occupation by the Ottomans, a peace and cooperation agreement between the villages of Zagori region (at the time there were 14 villages) and the Ottomans was signed in 1430. The villages of Zagori are described as a kind of autonomous federation, which included several liberties, a contract lasting for the next few centuries. The privileges granted to the federal government of Zagori could be, for the most biggest part, maintained till 1868. The influence of the wealthy family Zagorian against the Sublime Porte was quite important in this relation. According to these privileges, the Confederation of Zagori was autonomous and self-governing, but under the control of a Vekili which had his seat in Zagori. A similar structure of a certain independence from the Ottoman occupation we had discovered in the valleys near Omis in Croatia.

Many of the residents in the local area were merchants and traders, until some of them were traveling abroad within the 18th century and made huge profits. The Plakidas family was one of those who even made an asset.  Alexios Plakidas, a benefactor and patron of his home region, donated large amounts of money for the village and the Zagori region.

The inhabitants of the wider area traditionally used a complex and functional network of paths through the mountains for their daily activities. At the same time the residents have been forced, due to the special morphology of the soil, the climate with its frequent rain and snowfall, as well as from the many swift streams and rivers, to build paths and bridges made of stone (particularly for bridges),which connected the paths  and created a better usage for the settlements.

The construction of bridges required great skills, therefore the bridges were the work of specially trained masters who in the majority originated from the villages of Konitsa and Voios. All bridges have been built in the period of 18th and 19th century with financial help by richer inhabitants or Turkish governors, which then  gave their name to the bridge.

Today about 80 stone bridges have been preserved in the whole region of the park, which have, depending on width of the river in its majority one arch, two or three arches. There are works of art in bridge construction, which are already worth the visit to the Pindos National Park in itself. In conjunction with inns, watermills and shrines, you will often encounter, the bridges are unique structural incentives for hiking in the Pindos area.

In the area of Zagori are the following bridges:

Today the villages are increasingly popular tourist destinations, especially during the winter season. The buildings of traditional architecture, as well as two schools and the historic restaurant serve as accommodation for tourists. The potential for walks along the ancient paths are just a bit discovered and used until now, what means a huge potential for the region.

Routes to South - even for long term stay