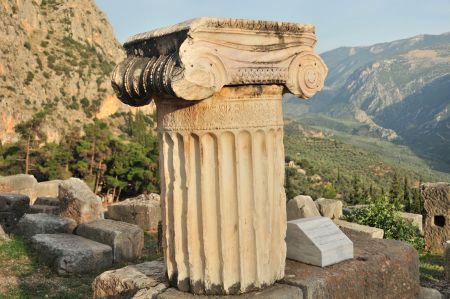 Our route using the Sacred Road of Delphi is lined with the treasure houses and anathems that the Greek cities and polies built to preserve their sacred gifts.

In contrast to the neatly arranged or grouped treasure houses of other sanctuaries, as in Olympia or Delos, the Delphi treasures were only loosely arranged. Although they mostly lay along the Sacred Road, they also filled open spaces outside this path, occupied special places for reasons of representation, with the new "rich cities" often responding to existing treasure houses with competing buildings.

Only 13 treasure houses are mentioned in Pausanias, Herodotus, Plutarch, Appian and Strabon descriptions, but 32 treasure houses are found in the ancient centre of Delphi. They bear witness to the considerable effort involved in their foundation and to express themselves in material and building materials. In the Apollo district, ten of the buildings, mostly from the 6th century BC, are erected in the Apollo district, some of the 5th century BC, partly on the screen, or even in the case of Knidos, the last treasure house of Thebes was erected in 346 BC.

The earliest of such building was founded around 600 BC by the Corinthian tyrant Kypselos of Delphi and contained the gifts of gold and silver, consecrated by the Lydian king Gyges, who according to Herodot, weighed 30 talents, thus approximately 800 kilograms. The building is identified with the 6.50 x 13.00 meter foundation east of the dance hall, was rectangular and aligned to the altar of Apollo. The construction of Kypselos does not appear to have possessed any columns or figures, which are usually characteristic of later treasure houses. After the fall of the tyrannies in Corinth, the city itself appeared as the founder of the treasure house, as the preserved dedication shows.

As a free citizenry, the inhabitants of Knidos built a treasure house and statues for Delphi around 550 BC. Here, for the first time, the typical layout of the antenna temple for these small buildings is encountered, but the columns between the antennas were replaced by female supporting figures, caryatids. The approximately 5.10 x 6.60 meter building of  Ionic order is the oldest marble building on the Greek mainland and was made from parian marble. The walls, alternating with flat binders and high runners, were crowned by a circulating figure frieze.

A very similar treasure-house, likewise caryatid, was dedicated by the inhabitants of Siphnos around the year 525 BC, at the height of their prosperity, as Herodotus notes, from the tenth of their income, which they obtained from silver and gold mines. The 5,95 x 8.37 meter high and 6.74 meter high treasure house, located on the southern side of the Sacred Road at its lower part, and thus directly above the steeply sloping terrain, rose on a high substructure, which had to compensate for the terrain . This treasure house, which can be reconstructed almost entirely from the architectural parts that have been preserved, was built in marble in an ionic order and overlaid with architectural monuments. The attempt to recognize the extent of the Knights' treasury is clear. The Figure Fries is one of the few firmly dated testimonies of Greek sculpture and forms an important fixed point for the dating of late archaic art. A meeting of the gods, the struggle of the Greeks against the Trojans, the struggle of the gods against the giants, were subjects of the painted and painted frieze.

Towards the end of the 5th century BC, the city of Sikyon built a treasure house in the lower part of the Sacred Road in the form of a small Doric temple of 6,34 × 8,48 meters. Until the end of antiquity, it was the first treasure house to be seen when one went up the Holy Street from the southeast. Founded in the foundations of the fortress, there are two older buildings: a small Tholos erected around 600 BC and a prostyle treasure house built around 560 BC with a porch of 4 × 2 columns.

We will continue to report from Delphi.

Delphi - The Oracle and the Wall constructions are known well

Delphi - A short visit to the Museum of the Oracle