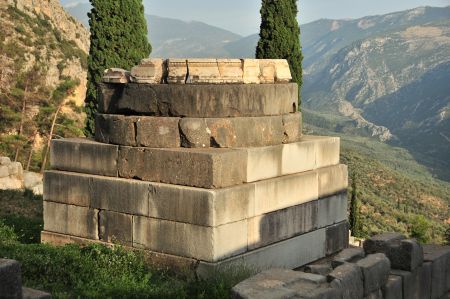 To explore the world-famous ruins and the Oracle of Delphi, we traveled to Apollon Camping Delphi, open all year round, an excellent base for exploring the ancient sites.

Especially the  quieter times during the Winter season are an excellent period to visit these ancient monuments, if one wants to avoid the tourist masses. Apollon Camping, because of its closeness to Delphi, also offers the possibility to leave your own vehicle in order to explore the ancient sites by bike or on foot, the proximity and paths through the small town of Delfi makes both possible.

Interesting are some hiking trails leading to the ancient sites, always offer the view into the valley of the Pleistos river or the Gulf of Corinth, which view dominates the campsite. We cycled from the campsite to the excavation site, where the bicycles can be parked safely in the cash desk area. The Delphi excavation site stretches over about 300 vertical meters on the slope and this makes it not at least extremely attractive for every visitor due to its scenic beauty. We are always amazed with the quality of the views offered by the places chosen for the ancient sites, as the slopes certainly do not simplify the construction. The most important excavations, including the statue of the wagon driver of Delphi, are now displayed in the archaeological museum of Delphi, right next to the excavation site.

We first explore the Sacred Road, which runs from the south-east corner westwards to a passage of the Temenos Wall, but turn to the north before reaching the older path of the original holy district. From here, the Sacred Road ascends north-east to the terrace of the temple, past the dance-place below the temple, and reaches the temple terrace at its southeast corner. From there one reaches the altar and temple of Apollo.

We first consider the phenomenal architecture of the masonry, which is to be looked at very closely here, and which has hardly been executed elsewhere in such a perfection. At all times, constructively strong enough to burst thousands of years, even without mortar. In the 6th century BC, wall formations had been trained both as ornamental and constructive elements. With blocks, the front view of which was at least five-fold, one created polygonal motifs. These were usually roughly composed. Trapezoidal or cuboids masonry was either irregular when the layers were not uniformly offset, or in the opus isodomum, or in regular layers of identical height, or in the opus pseudoiso domum, that is, in regular layers of different heights. These associations were not accidental, and the architectural styles often changed; Apparently they were chosen according to both static and aesthetic aspects.

Thus the polygonal masonry was used, with a round dress (called Lesbian), in which all the stones were fit but were cut into different shapes, for representative retaining walls, both because of its great stability and, as here at the Apollo temple in Delphi, because of the Arabesque Effect. This type of construction was, however, very expensive and was used only rarely in the fifth century BC. This construction alone makes it possible to place the construction period on the foundation walls of ancient buildings with relative accuracy.

The Holy Street leads up to the temple of Apollo and is lined by the treasure houses that the Greek states erected for the preservation of their sacred gifts. The today reconstructed treasury of the Athenians was built in the time between 510 and 490 BC in the form of an antenna temple in the Doric architectural style.

Delphi - A short visit to the Oracle