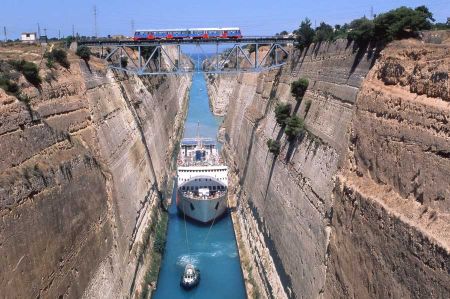 Traveling from Athens towards Peloponnesus / Corinth by car, you can easily miss the imposing view into the Canal of Corinth, which construction plans are going back so far into history.

Especially if you are on the motorway, which hardly gives an insight view into the canal. There is a bit of perseverance and patience necessary, when visiting the canal, as it is an interesting observation to watch the passage of a larger ship on the rope of a tugboat, which hardly seems to fit in width. In the meantime almost 130 years old, the Canal of Corinth is still one of the most imposing constructions on earth.

For the 6,346-meter-long canal, which was built between 1881 and 1893, the land connection of Corinth, the so-called Isthmus of Corinth, was traversed at its narrowest point. Since then, the Canal of Corinth connects the Saronic Gulf with the Gulf of Corinth. In order to create this possibility of passing through and to save the ship traffic from going around the Peloponnesus which is about 400 km long, it was thought to work its way through the rocks down to 84 m. This resulted in a water depth of about 8 m, not much when we think about the depth of today's ocean giants. The canal bed is about 24.6 m wide at the level of the water, but narrows down to about 21 m, while the upper clearance of the terrain section is 75 m on average. The canal walls at an angle of 71 ° -77 ° rise up to 79 m. Five bridges cross the canal on the summit.

Worthy of note and always worth a visit are also the lowering bridges at both flat ends of the canal. As a vessel approaches, they are sunk into the canal by a motor-driven linkage.

Looking back into history - project Channel of Corinth

However, a look at the history also shows that the idea of a canal can already look back on a history of 2,600 years. In the beginning - all the plans handed down - the tyrant Periander of Corinth is probably the best. However, he has never dared to try. Instead, in the 6th and 5th centuries BC, a diarcos, the so-called Diolkos, offered the possibility of avoiding a diversion of the Peloponnesus Peninsula by carrying ships and cargo across the land route.

In Roman times, the idea of a channel for the connection of the Saronic with the Corinthian Gulf was reopened. Plans were worked out under Caesar, Caligula (37-41 AD), Nero (54-68 AD) and Hadrian (117-138 AD). Mammoth projects from Roman history are still today the basis for modern large-scale projects, as is the channel of Pliny. While Caesar and Hadrian remained only in the first sketches, the actions of the two other Roman emperors continued:

In AD 40, Caligula sent some of his engineers to the Isthmus of Corinth to carry out exact measurements. However, the result was crushing: one was convinced that the water level of the Corinthian Gulf is much higher than that of the Saronic Gulf, so that in case of a breakthrough the island of Aegina and perhaps even parts of Attica would be flooded. The project was cautiously dropped.

To form a pininscula to an island 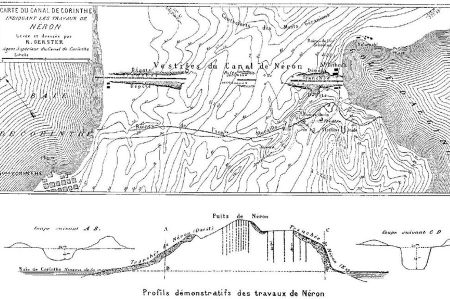 In 67 AD, Nero ordered several thousand workers - about 6,000 Jewish slaves - to the Isthmus. Supposedly he is said to have made the first stab with a golden shovel. The plan foreseen that the workers should come from two sides to the center of the land bridge, to meet here and make the final breakthrough. After three months, however, the work was discontinued because Nero had now passed away, and his successor, Galba (68 AD) and Otho (69 AD), the construction seemed to be too risky and too expensive. The remains of the canal were rebuilt and are no longer visible.

The Greek writer Pausanias (about 115-180 AD) was making, written in his travel report "Perégesisis tes Hellados", jokes on the attempts of the previous canal projects: "The Isthmus near Corinth on the one side extends to the great sea at the ancient Port town of Kenchreai and on the other side to the Corinthian Gulf at the ancient port town of Lechaion. This forms the land lying inside into the mainland. However, those who tried to make the Peloponnesus to an island have always stopped the attempt to dig through the Isthmus. And in the places where they tried, their attempts are still visible today. But they never came to the actual rock, and so the land is still a continent, as it is by nature."

Source: Wikipedia Bela Gerster, Werner, Walter: "The greatest ship track in ancient times: the Diolkos of the Isthmus of Corinth, Greece, and early attempts to build a canal." The International Journal of Nautical Archeology, vol. 2 (1997), pp. 98-119 (114, Fig. 25). Remains of Nero's project to cut a channel through the Isthmus of Corinth (AD 67). The dark shaded areas mark the ancient excavation work. The vertical shafts in the picture below served the Romans to examine the stone material in depth. The map was created by the chief engineer of the modern Belgasterster Canal Project in 1881 when exploring the Isthmus.

The legendary Channel of Xerxes at Chalkidiki
Karlsplatz, Karls Church and MuseumQuartier